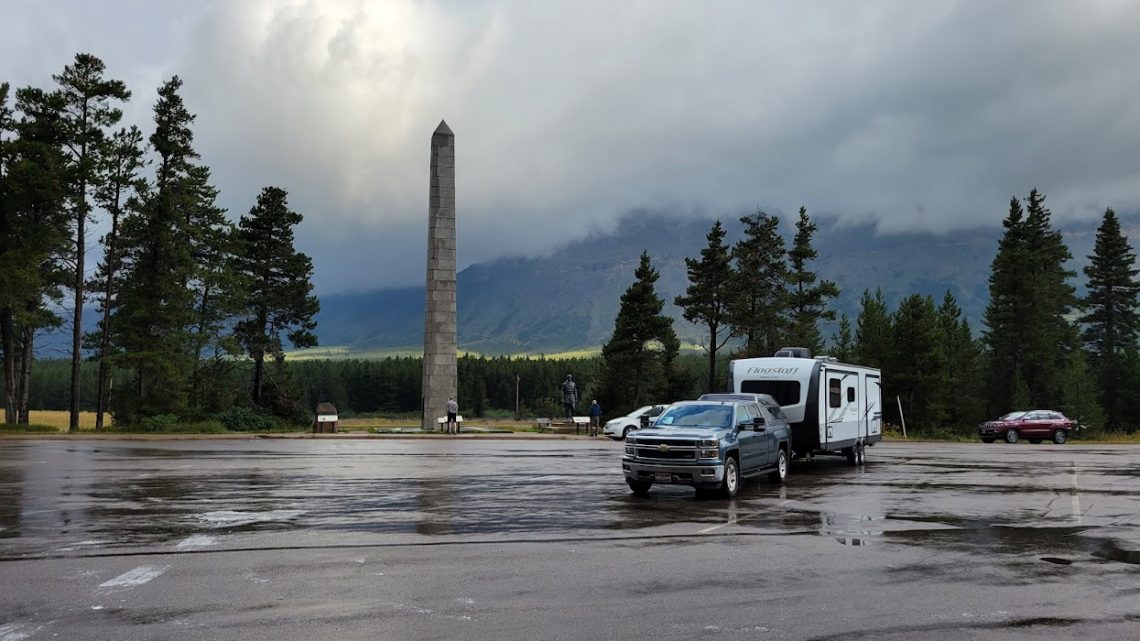 This is a long one… though I did save most of the actual highway shots for the video series. (I’ll be posting this segment a little later.) This post features points of interest along Highway 2 headed east out of Kalispell.

We left Kalispell about 7:00 a.m. It was raining and overcast, so we could hardly see the mountains in the distance. We headed east on Highway 2.

Our first stop was at a Little Free Library in Columbia Falls. It’s not the most attractive LFL I’ve ever seen, but it had an interesting neighbor: a Lil’ Supply Pantry. I hadn’t seen one of those before. I wasn’t prepared to make a pantry swap but I did peek inside. It was filled with canned goods and packaged food. Kind of a neat idea.

Our next stop in Columbia Falls was the Ten Commandment Park, though it was more of a drive through than a stop. It’s pretty much a circular driveway lined with billboards featuring various Bible verses and admonitions.

I wasn’t sure whether to be appalled at the tackiness of it, or appreciative of the efforts to witness to a lost and dying world. Anyway, it was interesting.

We stopped at many historical markers and learned a lot about the history of northern Montana. You can zoom in to read the signs, if you’re interested. Bad Rock Canyon is east of Columbia Falls.

Berne Roadside Park is the name of the pullout where the Bad Rock Canyon sign was posted. It’s not so much a park as a wide spot in the road.

Shepard Memorial Fountain was also in the same pullout. I did not learn who Shepard was and why we remember him. The fountain itself appeared to be dry, or turned off maybe, but there was a pipe with water coming out of the hillside next to it. It didn’t seem to be as lovingly tended as Elmer’s Fountain.

We crossed the continental divide at Marias Pass which is marked with this obelisk which is a tribute to Theodore Roosevelt… or maybe Lewis and Clark… or possibly John F. Stevens. No, wait, the statue is of Stevens. I’m pretty sure the obelisk is for Roosevelt. Somebody, anyway. But who was Marias? I think I read it somewhere, but now I don’t remember.

The Blackfeet Nation Sculpture in East Glacier is made of recycled bits and pieces. Scrap metal, automobile hubcaps, barbed wire, and I don’t know what all. I thought it was attractive for all that.

We passed a couple of the vintage red buses from Glacier National Park going the other way.

The Blackfeet Nation historical marker near Browning gives a good overview of this group of native tribes.

The Baker Massacre historical marker near Shelby tells a very sad story that should have never happened.

The Sweet Grass Hills marker near Chester tells the Blackfeet legend of this area.

I don’t know anything about this sculpture in front of Stockman Bank in Havre. I just thought it was neat.

The Battle of Bears Paw marker in Chinook tells the story of Chief Joseph. All I had previously know about him was that he was the one who said, “I will fight no more forever.”

My second Little Free Library of the day was near a gift shop in Malta.

I think this Cattle Brands sign was outside of Malta. I was fascinated by the creativity of the brands.

I was interested to learn about Sleeping Buffalo Rock, but not so impressed once I saw it.

First of all, it is displayed, along with another large rock, in this shelter with a fence around it. It was hard to visualize the buffalo shape with the fence so close.

It appears that packrats have scattered debris on and around it, but I think it’s actually tributes or offerings that people have left… pieces of cloth, braids of grass, coins, cigarettes, candy, and other food. Flies were swarming around, so it was pretty nasty.

And, of course, there needed to be a sign about the buffalo/bison that used to roam these plains.

My last Little Free Library of the day was in Glasgow. I think it was the most awkward one I have ever visited. It’s a small box right up next to someone’s front door. Their window shades were up, so I felt like they might have been watching. Not only that, but the dog in the yard started howling as I approached. Needless to say, I didn’t linger long.

The “In Memoriam” marker pays tribute to the natives who died of smallpox in 1837.

You see that sign that says Historic Point with an arrow? And you see the actual Historical Marker by the tree? That’s one we didn’t stop at. I don’t know why. You’ll have to ask the man. Maybe he didn’t see it. In any case, we buzzed right on by and now I’ll never know what historical event happened on that street corner.

We crossed through the Fort Peck Indian Reservation so I was glad they had this sign so I could learn more about it. That was our last informational sign of the day.

We stopped for the night at a city park in Culbertson where they allow boondocking (free camping).

Next we’re headed into North Dakota. We don’t plan to cover as many miles tomorrow, but I’m sure there will be more interesting things along the way. Stay tuned!