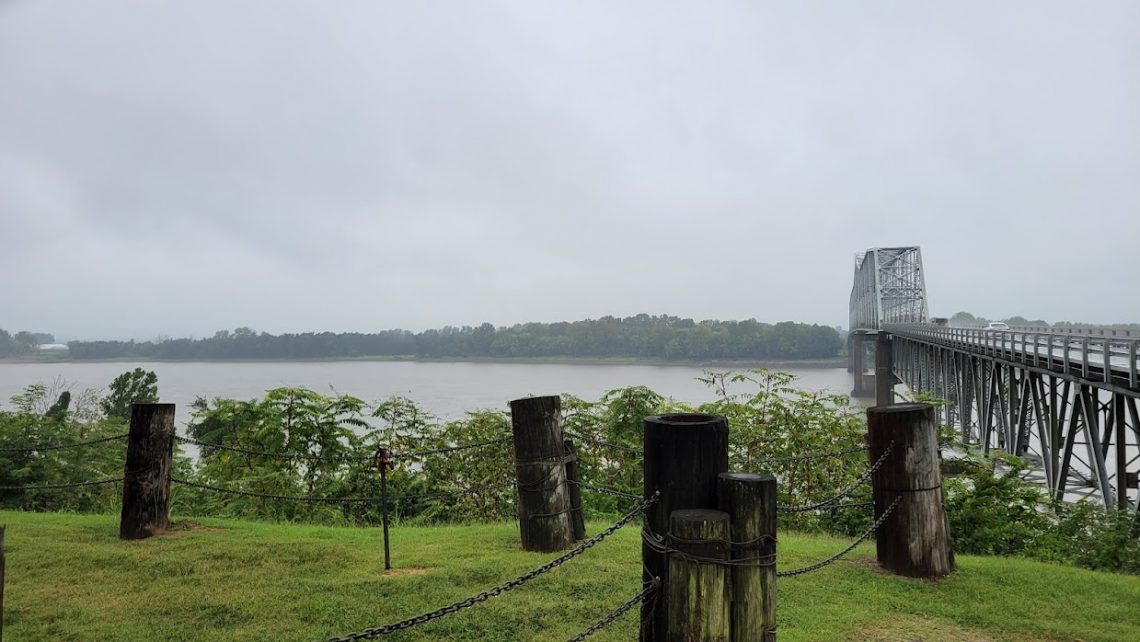 We pulled into a quiet roadside park last night for our overnight stop. The weather forecast was for rain in the night, but it didn’t start until about 7:00 a.m. We figured we wouldn’t be able to see much if we tried to drive, so we stayed there awhile and I worked for a little bit before we finally got on the road.

Our first stop was in Chester, Illinois where Lyle wanted to see the Popeye statue. Chester is where the creator of Popeye was born, so the whole town kinda has a Popeye theme going on.

The Popeye statue is next to the Chamber of Commerce which is right on the Mississippi River.

As we wove through downtown Chester I spotted this mural. Lyle pulled over so I could run over and take a picture.

There was another great mural on the facing building.

Who should I encounter as I dodged the raindrops but J. Wellington Wimpy enjoying a hamburger? It turns out there is a whole collection of Popeye characters throughout town! We would have enjoyed tracking them all down, but Lyle was apprehensive about trying to do that with the RV, so we decided to save that adventure for another time.

Then we came to a Lewis and Clark historical marker. Though we are very familiar with the Corps of Discovery story we almost didn’t recognize them, because that’s not what they look like out west! I wonder at what point they gave up the fancy uniforms for more practical buckskins?

“Meriwether Lewis, William Clark, and their party passed this place on their way west. Here they crossed the river to visit Cape Girardeau. The next day they were relieved to find Nathaniel Pryor, a recruit who had gone hunting two days earlier but never returned. On November 24, 1803, they camped on a rocky sandbar near by.”

Further down the road, another Lewis and Clark site.

“In November of 1803, Meriwether Lewis, William Clark and their party camped on the slate rock bank of the Mississippi River near here. They found moving the boats up river very difficult and traveled only about one mile per hour against the strong current. It was a taste of the long journey ahead.”

I wonder if they used that picnic table?

There was a nice river overlook at this rest area…

…with a view of a bridge downriver.

One of the Little Free Libraries we stopped at had a companion Little Food Pantry. This is the third one we’ve seen like this on the trip. I really think it should catch on.

This is a historically significant site, as we learned from several plaques and signs.

“The Meeting of the Rivers

Long known to the Indian who used the two great rivers as his highways for trade and war, this junction of the Ohio and Mississippi was first sighted by Europeans when Marquette and Joliet glided past in 1673. Ten years later La Salle explored the area and established France’s claim to the Mississippi Valley. From that time on this confluence was recognized as a strategic site for settlement and fortification… In April of 1861 Fort Defiance was established at the confluence to thwart Confederate invasion and blockade the trade of the south. From here was launched General Grant’s great flanking movement up the Cumberland and Tennessee Rivers, which began at Fort Henry and ended at Vicksburg, giving the Union complete control of the Mississippi.”

…and two on the Ohio. (Though the second one doesn’t show up well in the picture.)

You know what else? This was another “Lewis and Clark camped near here” site!

“The beginning of the third principal meridian is located in the Ohio River 1,735 feet directly north of this point. In November 1803, this was the mouth of the Ohio River. At this location, the Lewis and Clark Corps of Discovery encamped for six days.”

You see that “photograph” in the lower right corner of the left panel? That’s what Lewis and Clark are supposed to look like! Not those fancy dandies with feathers on their hats!

“On November 14, 1803, Meriwether Lewis, William Clark and their party landed at the confluence of the Ohio and Mississippi Rivers, the site of the present day Cairo. They spent nearly a week here, learning how to determine longitude and latitude, a skill they would need on their westward expedition.”

Then they went west. And so did we. Sort of.

First, we went east across the Ohio River. The bridge seemed narrow when we squeaked by this big rig… but it wasn’t nearly as narrow as the Chain of Rocks Bridge we hiked over yesterday. I commented that vehicles must have been narrower in the past. Lyle said they were.

Then we went south into Kentucky for a few miles…

…and southwest into Tennessee. See you tomorrow!