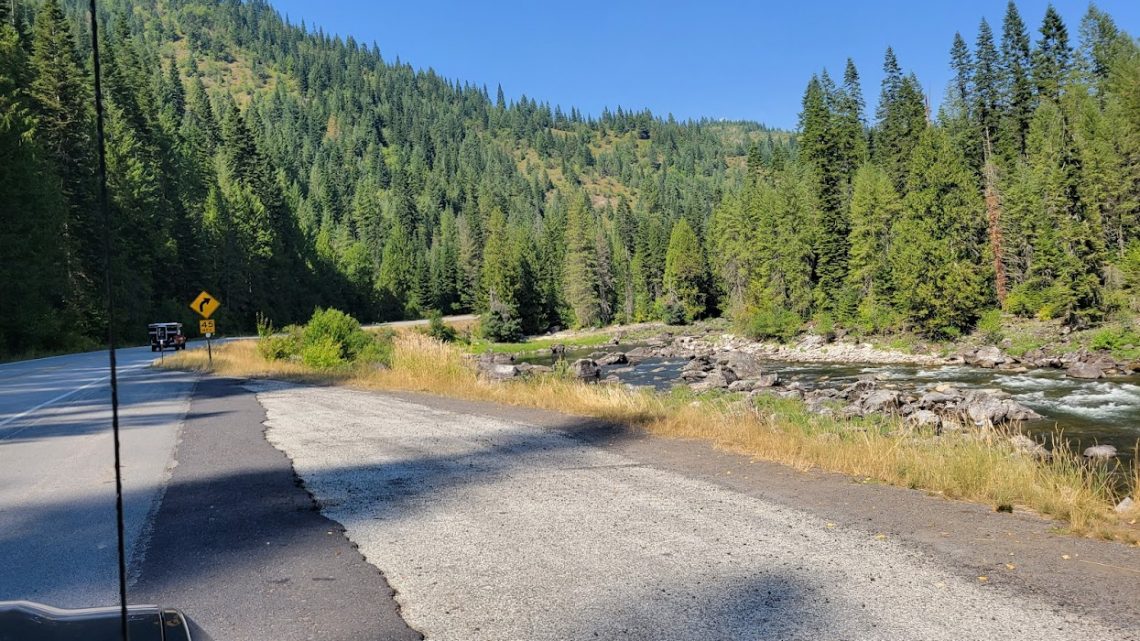 [Note: We’ve been camping in the mountains with no cell coverage for the past 3 days. Now that we are on our way again, currently at an RV park in the city, I can get you caught up on our adventures.]

After several days of smoky murkiness we were happy to awaken to bright sunshine on Monday morning.

Lyle cooked breakfast while I worked for a little while, and then we got things buttoned up to head out to our next destination.

Our first stop was in Cottonwood to visit a Little Free Library at Dog Bark Park Inn. It’s a giant beagle along the highway, with a guest room inside it. We’ve passed it many times but had never stopped.

In Grangeville we needed to stop at an auto parts store. As we turned to go into town we noticed this little pavilion housing some sort of skeleton. We got what we needed then circled back around to investigate.

The skeleton turned out to be a life-size replica of the Camas Prairie Mammoth. The display was designed to be viewed through the glass, though there was a sign saying that it was hard to see in the daytime because of the sunlight reflecting off the glass. It invited us to come back at night when it was lit up.

Instead, I discovered I could get pretty decent pictures by putting my phone right up against the window. Since it’s a replica I’m not entirely sure why it needed to be so protected. I mean, granted, it does look pretty fragile and you wouldn’t want kids trying to climb on it or anything, so maybe that’s why.

The park also had a very helpful map showing sites of interest right along our route starting at Grangeville Elmer’s Park in the lower left and heading northeast to the dot that says Powell. I referred to this list as we drove so we could be sure to stop at each one, if possible.

As we approached the mountains we could see residual smoke still hanging around, but the day continued sunny and hot.

We stopped for gas and a picnic lunch in Kooskia, Idaho. That’s pronounced Kooski… the A is silent. We don’t know why.

When I noticed Looking Glass Camp on the map at the mammoth park I had wondered where that name came from. I speculated that maybe Lewis & Clark had used a looking glass in some way at that spot. Turns out I was WAY off. Looking Glass was not a “what” but a “who!” A Nez Perce chief, to be exact. I’m not real clear on why he came to be called Looking Glass, though the Wikipedia article tries to explain.

We followed the Clearwater River along the Northwest Passage Byway for 88 miles. It is one of “Idaho’s Scenic Byways” mentioned in the film we watched at the State Park Saturday night.

We were delayed for about a half hour by a pretty serious accident along the river. The man in the yellow vest went from car to car letting us know what was going on. Apparently a “young man was pretty beat up” in the wreck. Later he came back to tell us that the EMTs determined he had a broken hip, so they loaded him up and took him away. When we finally passed the wreckage, it was a mini van on its side with the windshield bashed in. It looked pretty bad so we were glad to know it hadn’t been a fatal accident.

We arrived at Powell Campground at almost the same time as our friends, the Hooper family, whom we had arranged to camp with for 3 nights.

Since we couldn’t have a campfire we cooked our traditional first-night-of-camping meal of chili dogs on our outdoor griddle. We hiked down to the river just at sunset.