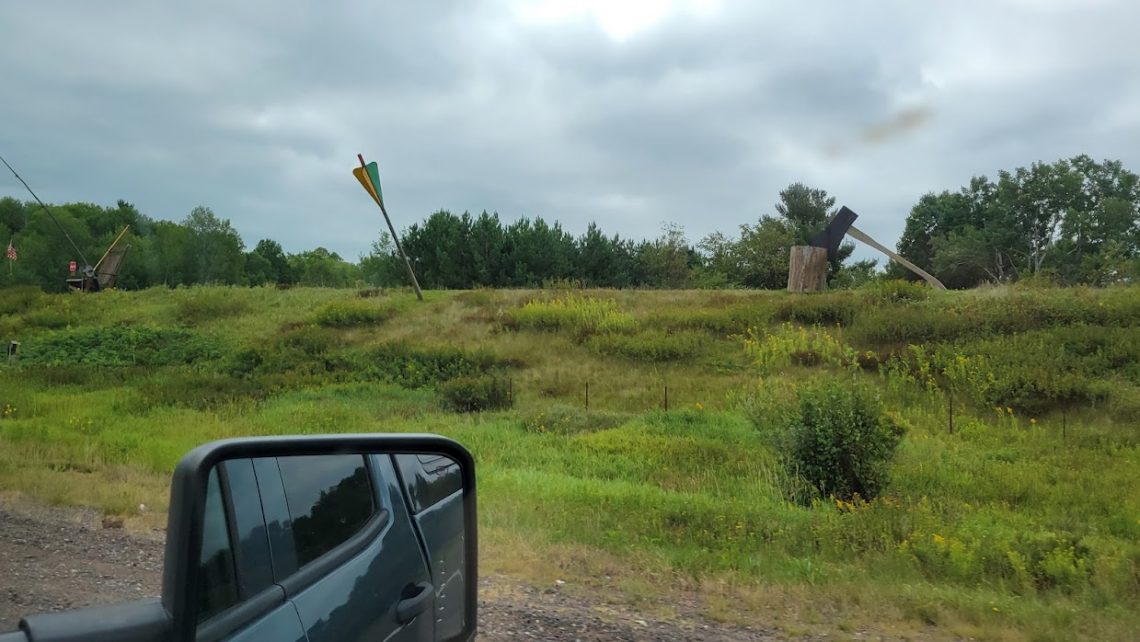 Exploring the small towns and big woods along the highway across Minnesota, Wisconsin, and Michigan…

It was overcast and dreary when we started out this morning. As we left Grand Rapids, Minnesota we crossed the Mississippi River again.

I can’t get over how small it is up here, having crossed the W I D E Mississippi many, many times in the south.

Lyle had made a list of several Little Free Libraries to look for along the way. There were more than usual on our “did not find” list today, but I always enjoy looking around the neighborhoods. This neighbor, in Proctor, Minnesota, decided a decorative sinking ship would be the very thing to add to their front yard landscape.

The sky was beginning to clear as we approached Duluth, but there must have been some low-lying fog or something that made it hazy off in the distance.

We crossed the bridge over the St. Louis River at Duluth, and then we were in Superior, Wisconsin.

We found several of today’s LFLs in Superior. This yard had at least one chicken wandering around in it.

I wonder how many neighbors look out their windows wondering about the travel-trailer parked on their street while the crazy lady scouts out the Little Libraries?

I sent Laura this picture of another Domino’s we spotted. She wasn’t impressed that they “only” pay their managers $12/hour. (Wages are higher in north Idaho! But then, so is housing!)

We noticed fall colors beginning to peek out as we continued driving east through the North Woods.

Before we crossed into Michigan we took a short detour up to the short of Lake Superior for a little hike to Superior Falls.

As we headed back to Highway 2, we realized that we actually crossed the state line into Michigan to get to the falls, then crossed back into Wisconsin to get back to the highway.

Since I hadn’t got a picture of the state sign when we crossed from Minnesota in the west, I was happy to get this one.

And just a few minutes later we crossed into Michigan on the highway.

We detoured a few blocks in Ironwood to visit the 52-foot tall statue of Hiawatha.

I impressed myself by quoting the first two lines of the poem above (which should give you a hint as to what poem it is). But then I wasn’t so impressed when I realized that was all I knew of it.

It reminded me of the year Granddaddy read the entire book-length poem, much of it aloud to any family members who happened to be in the room with him. We weren’t much interested, but I wonder if that’s how the first two lines somehow became imbedded in my memory? I know I never tried to memorize it!

After visiting Lake Superior today I decided that the “shining Big-Sea-Water” must refer to the lake, but I wondered what Gitche Gumee was. Google to the rescue. Turns out, it actually is Lake Superior! That’s your educational tidbit for today, because you probably didn’t know that either.

Tonight we’re staying at an RV park in Iron River, Michigan near this pretty church. At 6:00 they played chimes!

Tomorrow we’ll explore a bit more of the Upper Peninsula. See you then!