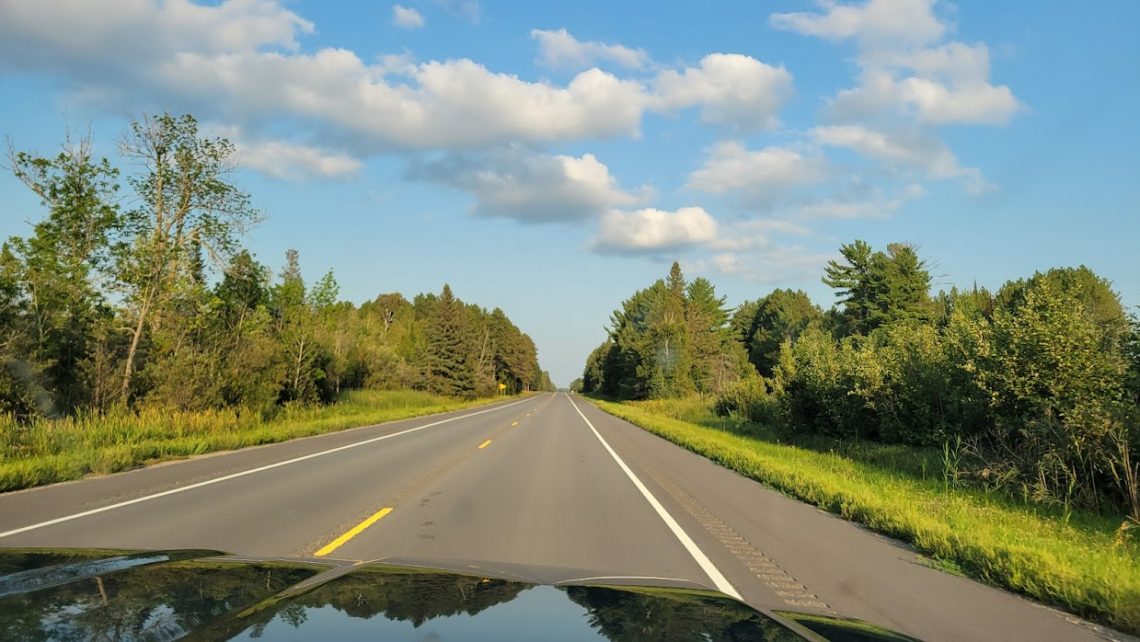 Today we took in the prairies and forests of northern Minnesota with some startling “giants” along the way.

A thunderstorm rolled across eastern North Dakota early this morning. We had planned to get on the road a little earlier today but decided to try to wait out the storm before starting. By 10:00 a.m. it was still pouring down rain, so we headed out anyway.

We stopped in Rugby to take a picture of the Geographical Center of North America, in spite of the rain.

As we traveled east the clouds began to lift, much to our relief.

In Michigan, North Dakota we happened upon a memorial marker for a train wreck that happened in 1945. We wondered if the military men were going home from the war.

I enjoy watching for vintage signs of a bygone era like this one in Grand Forks, North Dakota.

Soon we crossed into Minnesota.

We found our first Little Free Library of the day in Fisher, Minnesota.

And then this cute double-decker one in Fosston, Minnesota.

We read that Fosston is “where the prairie meets the pines” and we did start seeing more trees almost immediately, though they were mostly not pines, at least at first. This area was so heavily logged in the 1800s that the land was essentially laid bare. So the current forest is relatively young.

By the time we got to Bemidji we did start to see more pine trees… and my favorite Little Library of the day. It was well-stocked, and that flirting bench!

We stopped at the Paul Bunyan Park in Bemidji to see the “life size” statues of Paul and Babe.

Life size according to tall-tale legend, that is. The statues were built in 1937. I don’t think that’s when Paul Bunyan died. He’s probably still alive!

We crossed the Mississippi River for the first time (on this trip) in downtown Bemidji. That’s all the wider it is there! It almost looks like you might be able to wade across it! Bemidji is close to the headwaters and is the first city on the river.

We passed an interesting-looking logging museum near Cass Lake, “Lyle’s Logging Camp,” but again, we were too late in the day to go inside.

And this freaky-looking thing, The Big Fish Supper Club, along the highway.

We crossed the Mississippi River one more time before stopping for the night in Grand Rapids, Minnesota.