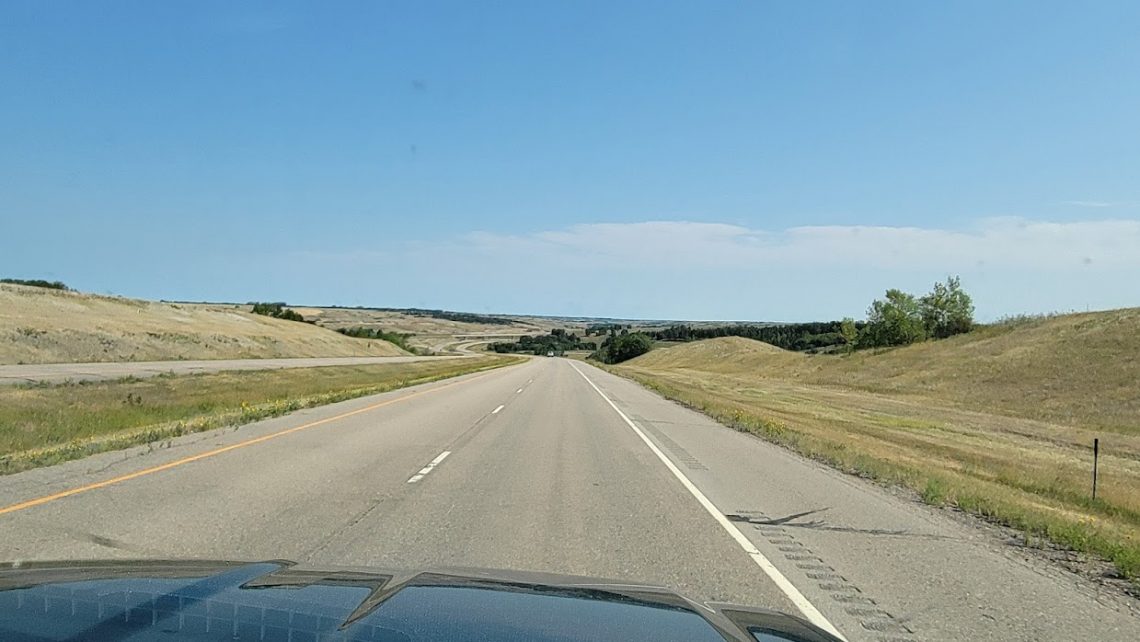 Today we were mostly in North Dakota, and while the terrain is much like eastern Montana, it was a completely different experience.

We left our campsite in the city park in Culbertson, Montana about 10:30. (I worked for awhile before we got on the road.) Since we knew we’d be covering more prairie miles today we expected the scenery to be much like it was yesterday.

We stopped at the first historical marker we came to, memorializing Fort Union, and that was the last one we saw all day, because we crossed into North Dakota soon after that.

It seems North Dakota doesn’t care much about historical markers. I’m pretty sure it’s not because history didn’t happen. Maybe we’re just supposed to guess? Or perhaps read about it elsewhere?

Almost immediately we noticed the oil rigs, and then many, many active oil pumps.

Also, Highway 2 soon split into a divided 4-lane highway and continued that way all across the state (at least all the distance we’ve come so far). I’m not sure why, because it’s not a particularly busy highway.

In Williston we passed a Domino’s store, so I snapped a picture for Laura who works for Domino’s. She said I needed to start tallying them on my blog. Today’s tally: 1. This is the only one I saw all day.

Then miles and miles of prairie, broken up by oil pumps…

In Minot (rhymes with “Why not?”) I found 3 more Little Free Libraries. My favorite was this one with a partner “Little Free Garden Stand.” (Reminded me of yesterday’s Little Free Supply Pantry in Columbia Falls.) Sadly, there wasn’t any garden produce to be had. Too bad, because I would have loved a zucchini or a couple of tomatoes!

The highlight of the day was the Scandinavian Heritage Park in Minot. We got there a little after 4:00 and, as it happens, the buildings all close at 4:00, but we were able to walk around outside and there was still a lot to see.

The Sigdal House is a 230-year-old house which was moved to North Dakota from Norway in 1991.

We were able to peek in the windows and were startled to find it occupied by Sig the Troll!

The “stabbur” (a storage house) was another interesting building. It doesn’t have windows so we weren’t able to peek inside.

The centerpiece of the park was the Gol Stave Church Museum. This was the one we really would’ve liked to see inside.

The artistry and craftsmanship of the exterior is impressive.

Another fun feature in the park was the 30-foot tall Dala horse. If that doesn’t make you think “Swedish” I don’t know what would.

There were several statues of famous Scandinavians throughout the park, including this one of Leif Erikson…

…and my favorite, this one of Hans Christian Andersen. I love how he’s holding his book with his finger marking his place while he visits with the bird.

As we continued on down the highway we passed the Denbigh Experimental Forest. It didn’t look like much of a forest to us, but we didn’t stop to investigate if there were more forest-y areas once you turn off the highway.

Tonight our host is the city of Towner, North Dakota (population 533) who offers free accommodations to “campers and tenters” in the city park, along with electrical hookups on a “freewill donation” basis. I just love small-town America, don’t you?