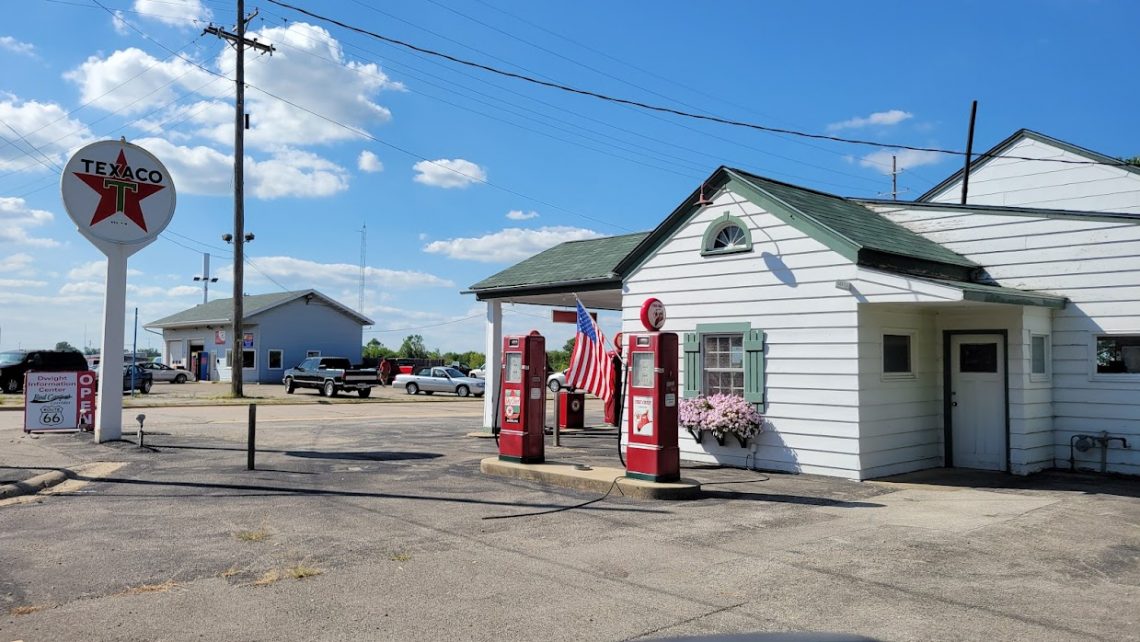 Hello, September! Today we braved downtown Chicago to find the point where Historic Route 66 starts and then wove our way through the city and several small towns, doing our best to stay on the old highway.

We left our trailer at the campground in Oglesby for the day, and headed up to the city. In the middle of the day on a sunny late summer Wednesday seemed to be a good time for an inner city adventure.

It took some tricky navigating and back-tracking but we finally made the proper turn and snapped a picture of the elusive sign: Begin Historic Route 66.

At which point we seemed to enter a part of the city where the sun doesn’t shine, what with the skyscrapers on every hand.

Soon enough we crossed the Chicago river and headed out of the city.

Henry’s Drive-In “It’s a Meal in Itself” is listed in both the guidebooks we are using. The sign features a giant hotdog, representing the polish sausage topped with pickles and french fries that is supposedly on the menu there. We didn’t stop, and I’m sorry I didn’t get a better picture.

In Joliet we saw the Bluesmobile on a Stick, which I think is something from a movie I’m not familiar with. It was still a funny sight.

Much of the highway we traveled today was cracked and bumpy with a number of potholes. We’ll have our trailer for the remaining section the next day or two, so we may be in for a rough ride. We’ll see how it goes.

In Wilmington we saw the Gemini Giant outside the Launching Pad Drive In. So quirky and random! I discovered that he’s just one of a series of “Muffler Men” giant advertising statues made from the same mold. Have you ever seen one? (There’s a list on Wikipedia.) Now I want to see how many we can find! So many things to search for and count!

We also saw the Sinclair dino on top of this tire store. I’ve thought about counting those, too. However, most of the ones I’ve seen have actually been at Sinclair stations. I call them pet dinosaurs.

Then there was Elvis, outside the Polk-a-Dot Drive-In in Braidwood… and also Superman standing by his phone booth.

The highlight of today’s drive was the historic Amber’s Texaco Station in Dwight.

The friendly volunteer manning the station was interested to know where we were from and asked Lyle to put a pin on the map.

We were fascinated to learn that this service station was in operation from 1933 until 1999, and was the oldest continually operating station on the route.

It’s sad that’s it’s not still in operation, but I’m glad they’ve been able to preserve it.

I loved looking at the old cash register and telephone and other office equipment and clutter.

We headed back to the campground for the evening and we’ll pick up Route 66 in Dwight again in the morning.