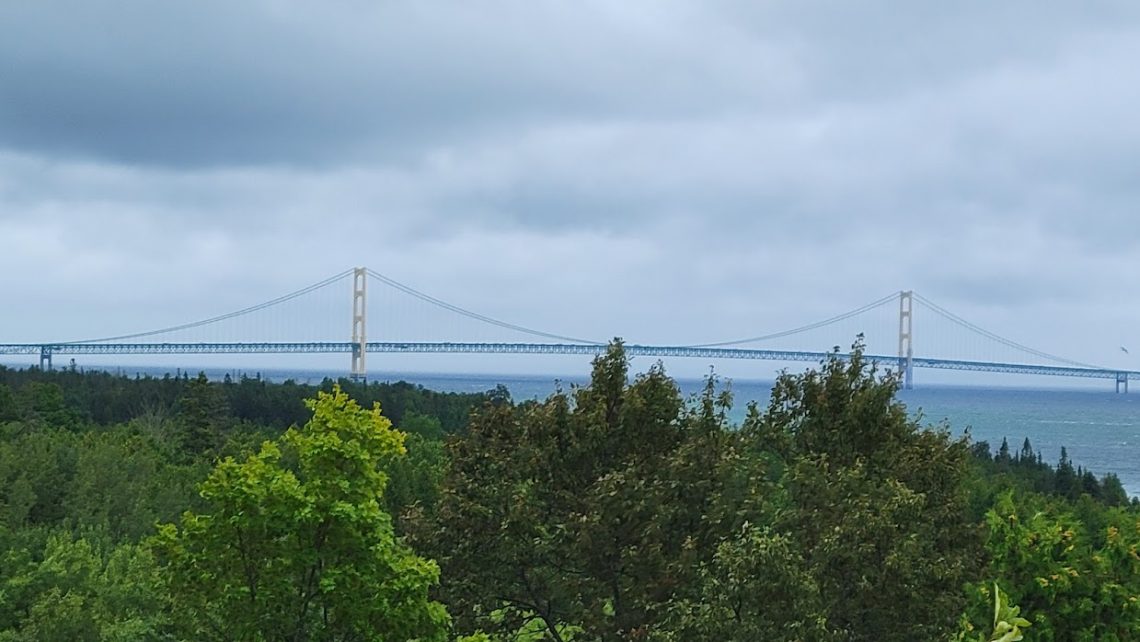 Our route today took us along the edge of Lake Michigan… but it was pouring down rain, cool, and windy, so we didn’t enjoy the scenery as much as we might have otherwise.

We passed through several small towns. We noticed one said “unincorporated” on the city limit sign, yet it seemed to have a nice variety of businesses and neighborhoods… not just a single convenience store and cluster of houses like you often see. The next one said “village”… and then we came to one that said “township”… We wondered what the difference is.

Lots of signage for snowmobiles remind us of how severe the winters must be in this part of the country.

We didn’t realize it until today, but Highway 2 actually dips down across the Michigan/Wisconsin state line for about 15 miles. My favorite little library of the day was in this charming little park in Florence, Wisconsin. There were several flirting benches… but again, rain. So no flirting on benches today.

Several of the Little Free Libraries today were housed in a blue plastic box like this, on the sidewalk in front of a business. They were in different towns (villages, townships?) and different types of businesses. We wondered if they had all been sponsored by the same outfit or something like that.

This was our first glimpse of Lake Michigan. I hadn’t paid much attention to routing so hadn’t realized we would see 3 of the 5 Great Lakes on this trip.

We stopped at a rest area near Manistique to take pictures of the lighthouse. I stood under the shelter to try to get out of the rain, but the wind was blowing it right in.

Since I was getting wet anyway, I just walked out on the beach to zoom in on the lighthouse.

We followed the lake shore for probably an hour.

St. Ignace marked the end of Highway 2 for us. (It goes into Canada from here, and picks up again in New York or something.) We stopped to look at the Mackinac Bridge before we crossed it.

You can see how strong the wind was from the flags on the right side of this picture. RVs and trailers were cautioned to not go faster than 20 MPH.

Here is where we saw Lake Huron (on the left) and Lake Michigan (on the right) at the same time.

It was actually kinda neat that we were forced to go slow over the bridge. It gave us a chance to savor the experience.

We are staying at the Mackinaw City KOA tonight. It’s not far past the end of the bridge.

Even though we’ve completed Highway 2 West now, we intend to continue to stay off the Interstate as much as possible for the rest of the trip. Stay tuned for more adventures!