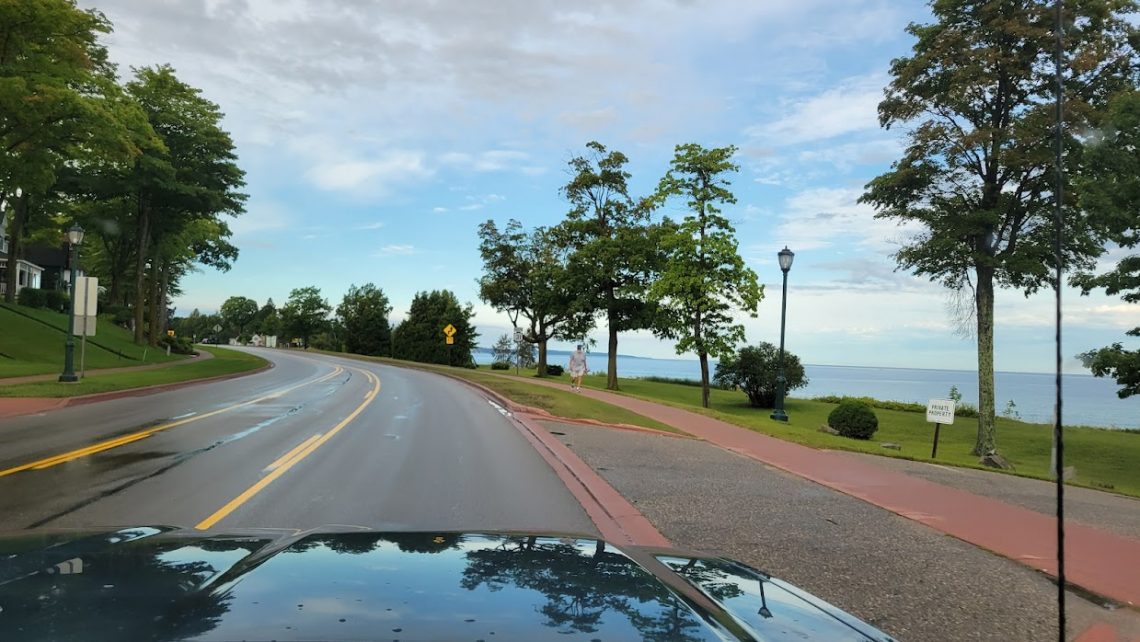 We wended our way along Lake Michigan visiting SEVENTEEN Little Free Libraries in small towns along the way. I’m pretty sure that’s my record for one day. Don’t worry, I’m not going to show you pictures of all of them. At least not today. Maybe I’ll make a video showing all of them from the trip when we’re done to post on our YouTube channel.

It was raining when we left the KOA in Mackinaw City this morning, so we hoped we weren’t in for rain all day again. I know this time of year rain is always welcome, but it doesn’t make for great traveling. Fortunately, it soon cleared off.

We stopped at a road side park right on the lake. I was amazed at how clear the water is.

I loved looking at the stately old homes that were so prevalent in the little towns along the lake. Those porches!

Bonus: This one even had its own LFL!

In fact, several of today’s LFLs coordinated with their houses. This one even had tiny stonework on the corners.

This house wins first place among my favorites of the day, but while its LFL was painted to match, it didn’t have the attention to detail that the other one had.

Our search for LFLs took us to one community that intrigued me. This abandoned “Riverside Cafe and Campground” reminded me of a similar place one of my uncles owned in Louisiana when I was growing up.

The “Historic Wilson Grocery” also caught my eye. Another thing that I thought was so interesting about the area was that several of the older homes had screened-in buildings in their yards. Kinda like gazebos but not that elaborate.

We wondered what the history of the area was. Wikipedia to the rescue again! It seems Idlewild was a resort area that welcomed African-Americans in the days before desegregation. After the Civil Rights Act of 1964 other places opened up and this area began to decline. It sounds like efforts are being made to redevelop it. It’s a pleasant area, so I can see the appeal.

Tonight we are staying at the Paris Park Campground, which is another interesting place. The park itself is old and somewhat rundown, though the campground seems up-to-date enough and fairly popular. We walked over to the park section and discovered this 20-foot “Eiffel Tower” which we later learned was made by high school students in 1980 out of old bed frames.

A dried-up channel runs through the park. I speculated that it was perhaps a fish hatchery back in the day.

One clue was this open and empty “Fish Food 25c” dispensing machine. Since the channels were filled with weeds–excuse me, I mean “aggressive native grasses and flowers”–there were no fish to be fed.

Signs all around the park told how they were carefully replacing the “noxious weeds” (such as English ivy) that previous generations had used for “traditional landscaping” with native plants because they were healthier for the birds and butterflies. According to one sign “noxious” means not native, i.e. harmful… where “aggressive” might be undesirable for aesthetics, but not harmful.

It turns out I was right about it being a fish hatchery but I haven’t been able to learn what happened to that. The only signs were about the plants.