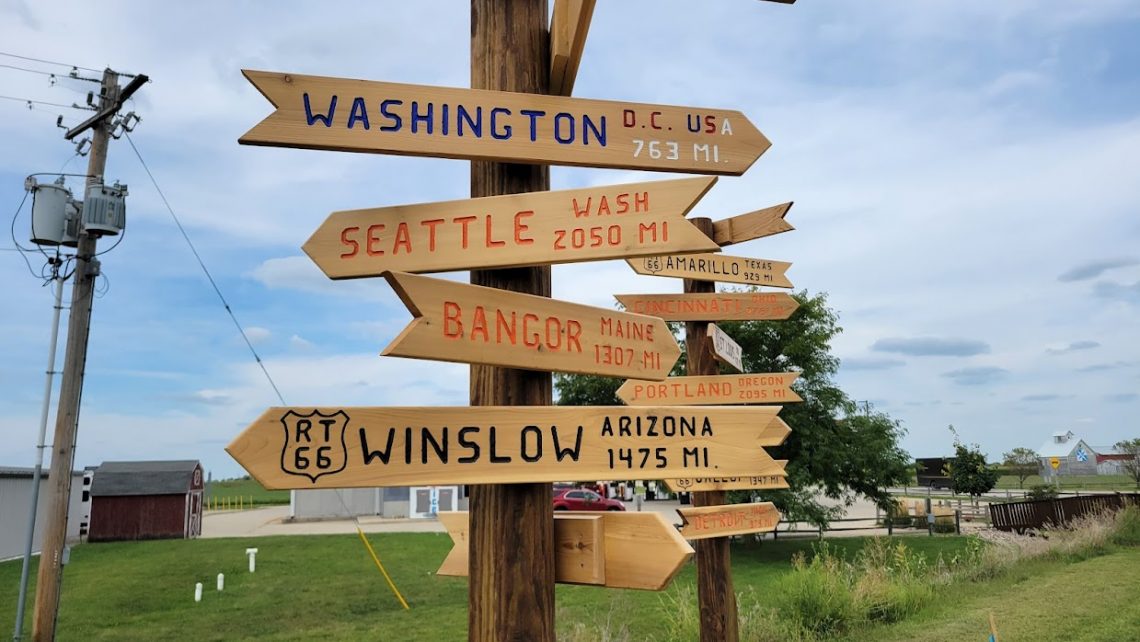 In which we dawdle along America’s Main Street…

Just to set the scene for the day, this was the first traffic we encountered as we set out on Route 66 leaving Dwight, Illinois. Even pulling an RV we passed this farmer putzing along on his tractor.

On the other hand, we felt like we were the ones putzing along when the Amtrak train whizzed by. We saw Amtrak at least twice today. This was an unusual sighting for us because Amtrak went past our house in Idaho around midnight every night, so we never saw it.

Our first nostalgic stops were in Odell. This railing and set of steps has an interesting story.

“From 1926 to 1948 this road was known as the “Mother Road” or Route 66. During this period traffic was so congested that it became necessary to build an underground passage to safely cross church goers and school children. You are now standing where the staircase to the tunnel began. In 1947, with the advent of the four lane bypass two blocks to the west, this became Business Route 66, and the tunnel, no longer needed, was filled in.”

From this angle you can see the church and school… as well as the current congestion of traffic.

Also in Odell was another charming service station, complete with a vintage travel trailer to one side.

The racks of t-shirts and souvenirs inside kinda spoiled the effect of the retro garage clutter.

Our guidebook advised us to stop at this pullout to get a picture of the Meramec Caverns barn. We figured they must not have been there when the corn was so tall.

Lyle climbed the ladder on the back of our RV to stand on the roof to take this picture.

The pullout was on a short section of the original highway. The route we drove was paralleled by this old road for quite a ways. We finally read something that made us think that in the final years Route 66 may have been a divided highway for some sections, before it was replaced by Interstate 55 at which time they closed one side of the old road. We aren’t positive about that, but we think that may be the way it was.

In Pontiac we stopped to read about this bridge.

“This venerable old bridge enters its golden years serving slow traffic on a city street, but it started life in the fast lane of the “hard road.” In 1924, Illinois Route 4 became the first paved road to connect Chicago with St. Louis. Only two years later, it was designated as part of the fabled Route 66. The bridge abutments are originals from 1926. The rest of the bridge was rebuilt in 2005 in its original design… An original Route 4 marker is painted on one of the bridge abutments. This is the last of its kind in Illinois.”

In Lexington we were actually able to drive on a mile on the original road.

The trees and grass grew up close to the road, and a fun series of Burma Shave signs had been installed as well as as handful of small billboards advertising local businesses. The “no shoulders” thing is something I remember from the stretch of Route 66 we have driven in Oklahoma.

In Towanda we walked a mile of the old road that has been developed into a walking/bike path.

We actually walked 2 miles because we parked at one end and walked the length of the “Geographic Journey” mile before walking back. As Lyle said, “When we got there we were only half way there!”

Along the mile were 8 signs similar to this, one for each state that Route 66 goes through.

Do you know about borrow pits? I didn’t. This pretty little pond is actually a borrow pit.

“Why is this body of water located here? Is It man-made or glacial? As you look beyond the body of water, notice Interstate 55 is elevated above the natural lay of the land. Why has the roadbed been raised? The land surrounding the interstate is low-lying and susceptible to flooding. Therefore, earth was excavated and relocated to raise the roadbed, thus leaving a large depression which filled up with water to a depth of approximately twenty-five feet. This feature is known as a borrow pit.”

In Normal we stopped at yet another vintage service station. You know what I spotted there?

A Little Free Library designed to match the building! In addition to a nice selection of books it also contained a few copies of the very helpful Route 66 guidebook we had picked up in Dwight yesterday.

I love the building with living quarters above.

In Atlanta we met Bunyon’s Statue, a brother to Gemini Giant whom we met yesterday–part of the Muffler Man series. I think we may see at least one more on this trip.

Just around the corner is the stunning public library with its own clock tower.

Behind the brick wall was a sweet little city park. I was baffled by the No Loitering sign…

…especially since another sign invited us to feel free to relax and enjoy the park. Isn’t a park meant to be loitered in?

Another feature in the park was this bubbling water fountain beside a flirting bench.

“This is one of four drinking fountains installed by the City of Atlanta in May of 1934… Upon the occasion, the Atlanta Argus reported, “A thirsty public appreciates the convenience.” Local old timers recall that older boys would sometimes pick up a younger lad and seat him on top of the bubbling fountain…”

The Palms Grill Cafe is across the street. It was closed (for the day, I think) but we peeked in the windows.

I would love to have eaten there.

Lyle noticed the Greyhound bus sign hanging above the door. I wonder if it’s still an active bus stop?

Our last stop for the day was the Railsplitter Covered Wagon in Lincoln.

“The Railsplitter Covered Wagon honors Abraham Lincoln in the only town named for him before he became president. It holds the Guiness World Record as the largest covered wagon and was voted #1 Roadside Attraction in America by Reader’s Digest Magazine.”

It is impressive, but personally, I think it looks a little funny to have him sitting on that wagon with no horses or oxen. It appears that someone swiped them while he was engrossed in his book.