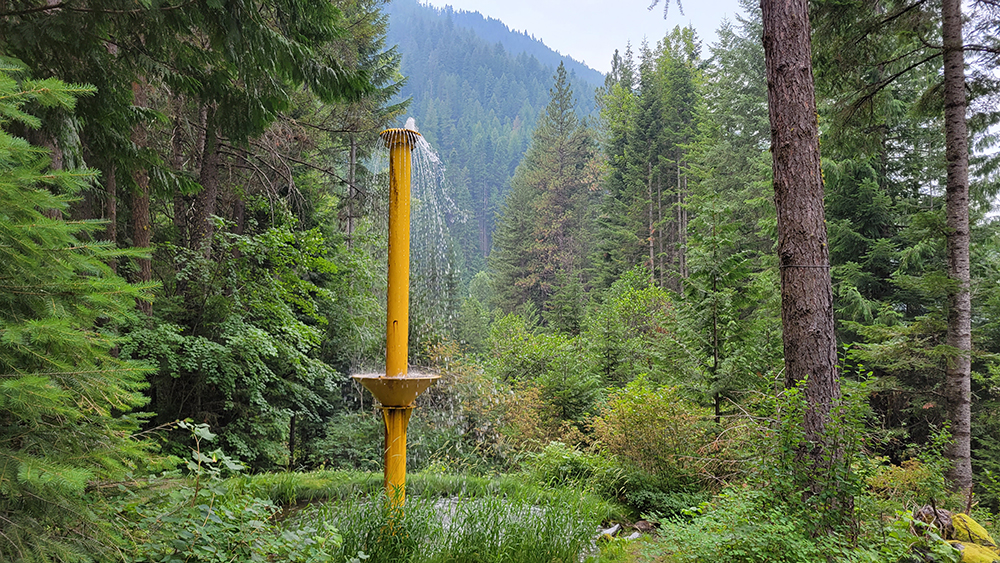 Elmer’s Fountain is an interesting little rest stop along Interstate 90 eastbound near Mullan, Idaho. We stopped there this past Sunday morning on our way to Montana to attend church with friends.

The bright yellow paint on the sign, mine car, and the fountains themselves make the rest area easy to see from the Interstate, but it’s around a curve so it’s also easy to whiz right past it before you’ve realized. I had mentioned to Lyle that I wanted to stop this time and even though we were watching for it, we still missed the exit. Fortunately, it wasn’t too far out of the way to take the next exit and come back.

It’s not a typical rest area in that there are no restrooms and I didn’t see any picnic tables. Nor is there an informational sign other than the big “Elmer’s Fountain” sign and “Gold Creek Mines” stenciled on the side of the mine car.

But if you need a drink of water? This is the place to get one! If you don’t mind drinking unfiltered water, that is.

There are 3 bright yellow fountains tucked in among the trees. We’ve been past here many times (and have stopped at least a couple of time) and the fountains flow all year long.

There are two tall fountains that splash down and a shorter drinking fountain.

While the sign says “Elmer’s Fountain” the engraving in the concrete at the base of the drinking fountain says “Arnold’s Fountain.” We wondered why.

From the lovely hazy pictures you might assume it was a misty morning. Nope. That is wildfire smoke in the air. Something that has become common every August around these parts. It didn’t used to be this way. We blame it on poor management of the National Forests.

In any case, this little park is an interesting stop. One other unique feature is this miniature log cabin a short distance up the path.

It’s about the size of a large dog house… or for two adventurous kids to crawl in and sit up.

Why is this here? What does it mean? We were so curious. Are you curious, too? Google to the rescue!

We learned that the fountains were built by a silver miner named Elmer in the 1950s or thereabouts, using scrap mining equipment. Apparently they were originally called Arnold’s Fountain in honor of Elmer’s best friend who was the original owner of the land. After Elmer passed away in 1986 (and presumably Arnold was gone as well) Elmer’s family renamed it “Elmer’s Fountain.” (Source: https://sondahl.com/elmersfountain.html)

And yes, I had a drink. In spite of the grungy-looking algae on the basin, the water flowing from the fountain was crystal clear and ice cold and tasted great!

Incidentally, we turned over 100,000 miles on our pickup on this little trip, so we had to document that.

The little log cabin, though? I still don’t know what that’s about.