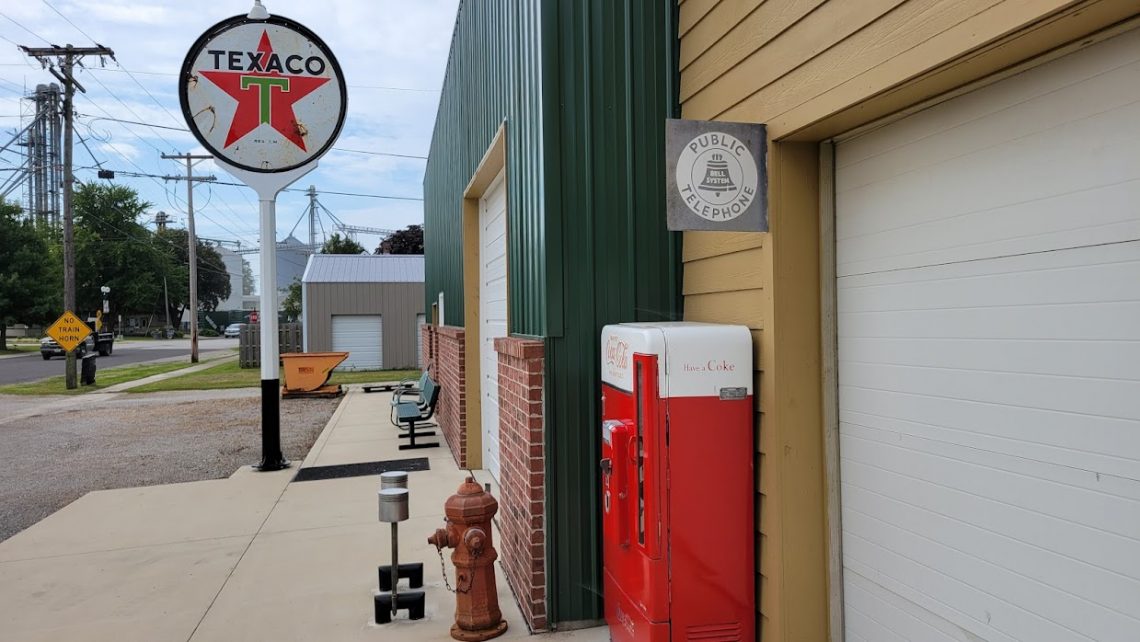 Many of the small towns along the old highway have commemorative murals on their buildings. Some are better than others, but it’s fun to see what they’ve come up with.

There are also signs memorializing the most random events. Case in point:

“In 1938, The House by the Side of the Road cafe had an unforgettable customer when actress Shirley Temple stopped for lunch. Afterward, owner J. Smith put a cardboard likeness of the child and an autographed menu on the table and permanently roped it off.”

There was another cool restored service station in Williamsville. It wasn’t open, so we just poked around a bit outside. We loved seeing the old car pulled up to the pumps.

It also featured several brands of gas, including Sinclair with the friendly pet dinosaur.

We detoured a few blocks just to see the Lauterbach Giant muffler man. He’s the third in the series we’ve seen on this trip. It was a busy street so we didn’t try to stop to take a picture.

Another short detour out in the country took us to the Sugar Creek Covered Bridge. As you might expect, it’s not open to vehicles.

Back on Route 66 we came to a short section paved with bricks. It was quite bumpy.

And yet another silly landmark.

“Turkey tracks were imprinted in the 1920’s when the original Route 4 concrete was poured, prior to its designations as Route 66. The story varies from a local farmer’s escaped turkeys to wild turkeys as being the owners of the prints.”

Aren’t you so glad I stopped to take a picture?

In some places the pavement was so narrow and rough it was hard to imagine that this was once the main highway.

The place appears to have once been a school (see where it says Gymnasium over the entry?) and then gathered all around it are kitschy statues from various businesses that no longer exist. It’s kinda cool that they have a place to live out their days… but ohmuhgoodness, it’s just a little too much all in one place.

MAGA Trump and a toothy dinosaur…

Big Boy and the Sinclair dino…

…an elephant coming out of the wall…

…a Uniroyal Gal giant statue, which is apparently the female counterpart of…

the Muffler Man… (this one isn’t as tall as others we’ve seen and he’s not holding anything, so his hand positions look particularly weird)…

…and a whole field full of other random eye-catchers.

Inside I even encountered human sized Alvin and the Chipmunks. Whew! Enough silliness!

Moving right along, our last activity for the day was a hike across the Old Chain of Rocks Bridge from Illinois to Missouri. It is only open to walkers and bicyclists these days.

“This unique bridge served as a Route 66 crossing from 1936-1965. As travelers waited to pay the toll, anticipation grew for the breathtaking view and rounding the sharp bend in the middle. The bridge was built in 1929 as a toll bridge. The distinctive 22-degree bend in the middle resulted from the need to build on solid rock footings.”

There’s the Mississippi I remember! (Earlier in our trip we saw the rivers near the headwaters. It was so narrow that I had a hard time reconciling that it was actually this very same river.)

And here’s the bend in the bridge. Very cool hiking/biking trail, but I’m glad I didn’t cross it with two lanes of automobile traffic.

One last bit of whimsy before we stopped for the day: the Brooks Catsup Bottle Water Tower in Collinsville.

Tomorrow we’ll be leaving Route 66 to follow the Great River Road for awhile.