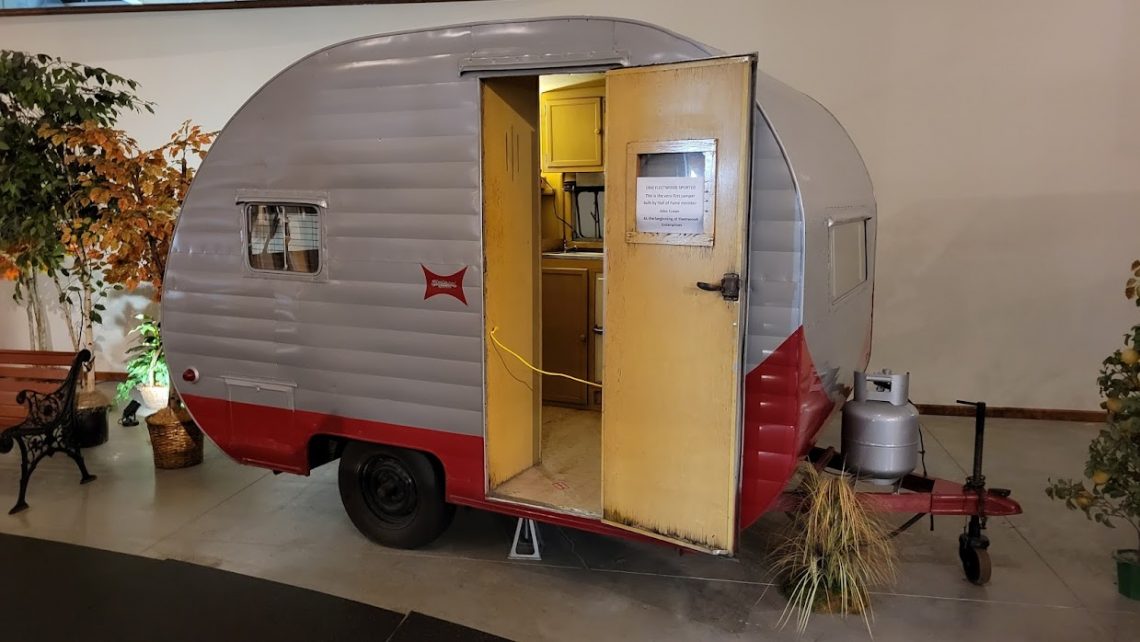 This was Lyle’s favorite day of the trip so far. He has been looking forward to going to the RV Hall of Fame Museum in Elkhart, Indiana for a long time. I took way too many pictures for a single post, so I’m going to circle back around later with a YouTube montage. For now, here are the highlights.

We had a couple of stops we wanted to make in Shipshewana before we got on the road this morning. Unfortunately, the coffee shop we wanted to go was only open for drive up, and with the trailer that just wasn’t practical. So we found another coffee shop along our route in Middlebury. As Lyle parked the trailer on the street guess what I spotted?

Yep! A Little Free Library! I was tickled because Lyle had told me that we wouldn’t be able to search out any more on the trip. Now that we are in the more populated part of the country traffic is heavier and it’s harder to maneuver the trailer in the random places that the Little Libraries are likely to be. But he did agree to stop if I happened to spot any with convenient parking.

So I made my book swap, we got our coffee, and we headed to Elkhart.

We weren’t sure what to expect at the museum due to that-which-shall-not-be-named… but happily it was open and uncrowded, and Lyle said it did not disappoint.

The exhibit hall was packed with every “house on wheels” configuration you could imagine, starting from the early days of the automobile all the way to the present.

One of my favorites was this “Automobile Telescope Apartment” from 1916 that originally sold for $100.

The back of the automobile telescoped out to form the bed…

…and then the sides telescoped out for storage on one side and a little kitchen area on the other. Somehow there was supposed an enclosed shower compartment arrangement as well, but we never did figure out how that worked.

Another of my favorites was the 1928 Pierce Arrow Fleet Housecar.

It was divided into rooms. The driver sat in his own little room. Then right behind him was a built-in cupboard and set of drawers. A dinette was on the other side of the same room.

I’m going to guess that made up into a bed.

The bathroom was in the middle, and maybe more storage compartments? (We couldn’t actually go inside this one, so the pictures are taken through the windows or by reaching in through the open door.)

The very back appeared to be the dining room and probably the kitchen.

I loved being able to go inside this 1954 mobile home. It’s 8′ x 42′. It reminded me of Lucy’s trailer in The Long, Long Trailer movie. I don’t think it was actually meant to be a travel trailer, but more of a park model.

This was the living room. I almost expected to see a piano in there, too.

This is standing in the same spot but looking the other direction.

There were bunkbeds in the hallway…

…and a tiny bedroom in the back, just large enough for a double bed (which was oddly missing).

Okay, one more and I’ll stop.

It has a tiny 2-person dinette with sweet ruffled curtains and a tiny built-in icebox.

The bed in the back looks like it perhaps would fold up into a couch, but the top “bunk” doesn’t look terribly comfortable. I don’t think I would rest very well on such an apparatus.

There are dozens more and we pored over each and every one. Then we wandered on to other parts of the building.

There was this model of an idea someone had for a mobile home park in the 1960s. It was designed kind of like a parking garage in the middle with all these slots for mobile homes.

Here’s the newspaper article about the idea. Can you even imagine?

Naturally we had to visit the library room. The stacks were filled with periodicals on one side…

…with repair manuals and campground guides on the other. I enjoyed leafing through some magazines about trailer living from the 1940s.

By then it was getting on towards noon and time to move on down the road.

Tomorrow our plan is to drive into Chicago (without the trailer) and find where Route 66 begins. The next 2 or 3 days of our adventure will focus on the Mother Road.