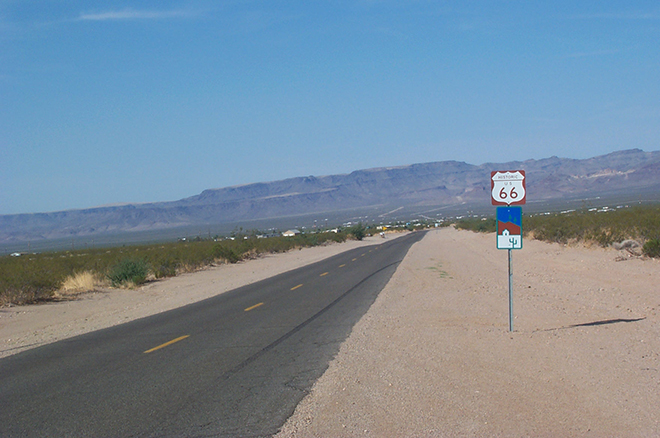 Day 4 of our roadtrip called for an uneventful 10-hour trip from Williams, Arizona to San Luis Obispo, California. We continued to see signs about Historic Route 66 as we drove along and we talked about how much fun it would be to try to follow the old route sometime. We stopped in Kingman, Arizona for drinks (at Sonic!) and saw a museum about Route 66. I was just dying to go in, and we would have taken the time except it didn’t open until 9:00 and it was only 8:30. We decided we shouldn’t just wait around for the museum to open. So Lyle decided to get off the interstate right there and follow the old highway to Needles, California (about 50 miles) before resuming our originally planned route.

As we angled away from the interstate the highway began to look just as I had always pictured it in my mind. Narrow two-lane highway, no shoulders, sand right up to the pavement with the ribbon of road stretching across the desert as far as the eye could see. It was a surreal experience, especially as there was very little traffic and no buildings or other signs of human life for miles at a time. We could see mountains ahead of us and I wondered how the highway crossed the mountains. We soon found out! This narrow two-lane highway twisted around and around and up and down, with hair-pin curves and sheer drop-offs (still no shoulders!), winding it’s way over the mountains. Now I could understand why the Joad Family in The Grapes of Wrath waited until night to cross the mountains so their car wouldn’t overheat! Did I mention it was already 100 degrees by 9:00 a.m.? Well, it was! We passed through an authentic ghost town, somebody’s old car (from back in the day) that apparently hadn’t made it around one of the curves and was just stuck in the brush half-way down the mountain, and another “live” town that looked like something from the Old West with wild burros wandering through the streets. This stuff was REAL, too! Not staged for tourists. By the time we finally made it back to civilization I was in desperate need of a bathroom! (Remember the Sonic drinks?) So we were happy to find a gas station, even if gas was $3.89 a gallon for regular! By then the temperature was 110.

We somehow lost the old highway about 10 miles before we got to Needles. The signs we tried to follow just led to a dead-end road, so we just got back on the interstate. I hadn’t noticed before how wide California is down in the southern part of the state. We drove across that wide expanse of desert, past Edwards Air Force Base, and gasped to breathe the next time we stopped at a blistering 114 degrees!

The rest of the drive was uneventful, and the coast was blessedly cool (mid 70s) by the time we got to our motel about 5:15 p.m. I was just thrilled to get to experience this small portion of the historic “Mother Road”!