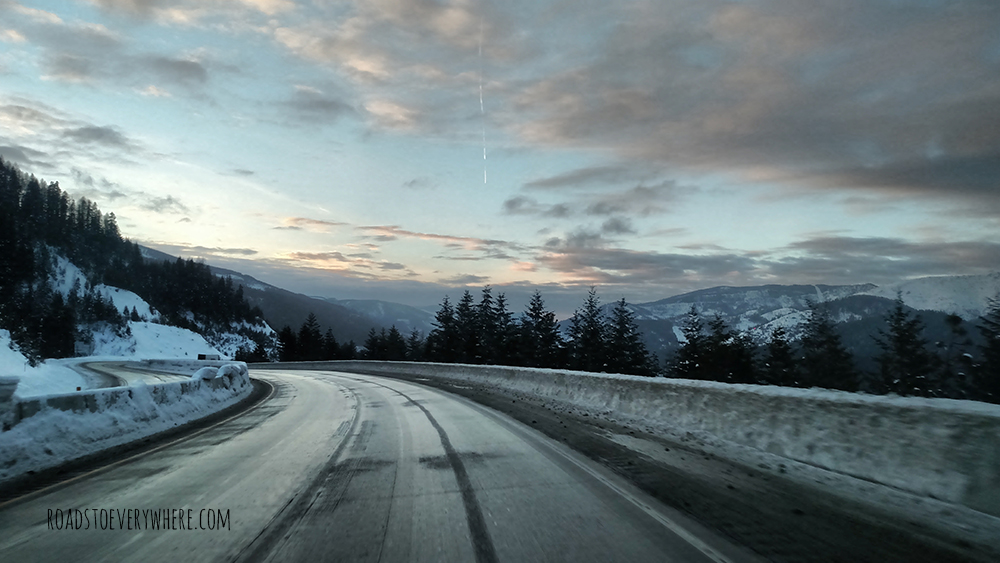 For our trip home from Arkansas we wanted to go through Kansas and Colorado for quick visits with family and friends. We left Saturday morning (New Year’s Eve) and planned to be home Monday evening.

I had hinted to Lyle that if it wouldn’t be too far out of the way I would also like to stop in Pawhuska, Oklahoma to visit my good friend Ree. (Okay, she’s not really my good friend. I’ve never met her. But I read her blog. And occasionally watch her TV show. So I sorta “know” her, right?) What I really wanted was to visit The Pioneer Woman Mercantile.

After looking at the map Lyle said it wouldn’t be out of the way at all, and he thought we could spare an hour or so. Isn’t he good to me? 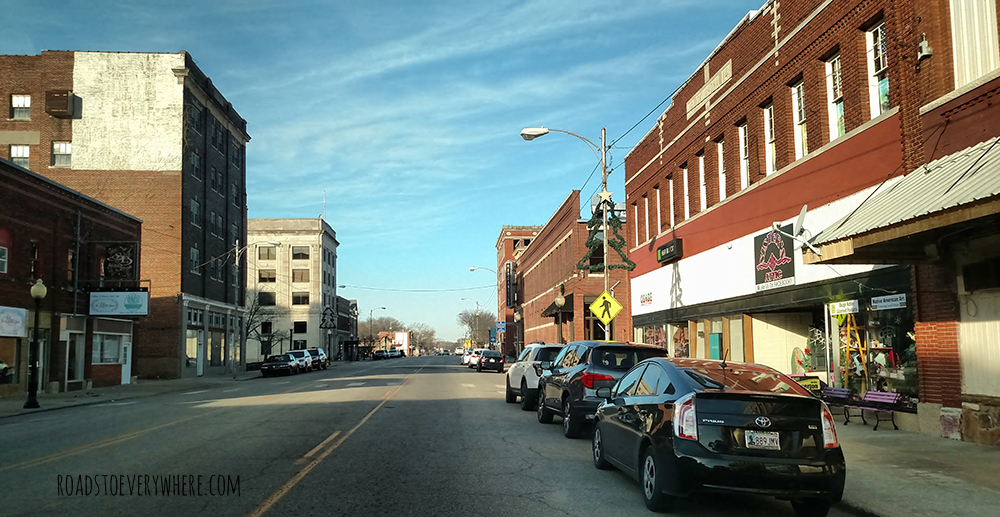 Pawhuska is a typical small town. I eagerly started watching for the Mercantile sign on the corner. Can you make it out in this picture? For those of you who don’t know about The Pioneer Woman, she’s a big-name blogger with a cooking show who lives on a ranch in Oklahoma. She and her family bought “the mercantile” building in downtown Pawhuska and have remodeled it into a gift shop/deli/coffee shop. They just opened back in the fall and I’ve been following the story on her blog. 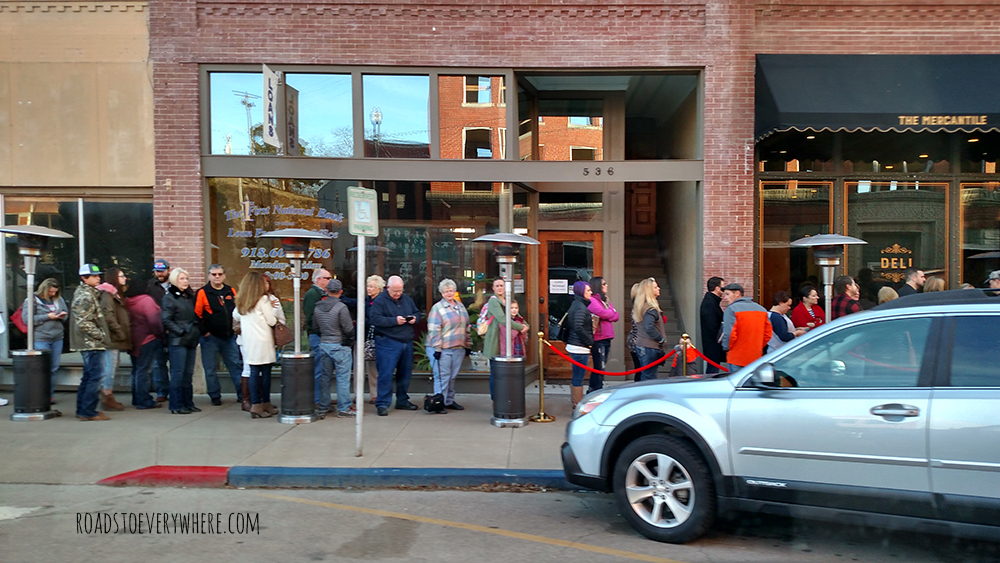 I had heard about the lines out the door the first week the Mercantile was opened, but that was several weeks ago so I hoped it wouldn’t still be that crowded. I was dismayed to see this long line along the building as we turned the corner. I told Lyle, “Forget it. It’s not worth taking the time to stand in line. I’ve seen the outside of it and that’s cool. Let’s just go on down the road.”

He argued with me. “No, I want you to get out and at least go up there. See if you can go in another door. That may just be the line for seating in the deli.”

So I got out and tried to act like I knew where I was going while he parked the car. Isn’t it silly how the simplest situations can make one feel awkward?

But you know what? He was right.

The gift shop part of the Mercantile was certainly bustling, but it wasn’t just jam-packed with people like I was afraid it would be. I texted Lyle to let him know, so he and Rebecca came on in. We enjoyed looking around. Then we went upstairs to the coffee shop area.

I loved that light airy space with the rustic feel. Oh, and I saw Paige barista-ing! (Paige is Ree’s daughter whom I recognized from pictures on her blog.) I didn’t go all fan-girl, but it was fun to see someone I recognized. Lyle bought me a latte. I expect he would have bought me something else in the gift shop, too, but I didn’t see anything I particularly need, though I really liked a lot of it. One thing I did miss seeing was the vintage Nabisco mural. I decided it must be in the deli part of the building, which I didn’t venture into.

It was a fun stop, but we didn’t stay all that long as we had a lot of miles to cover that day, plus we had plans to see some of Lyle’s family in Kansas. So we headed on down the road.

We met up with Lyle’s brother and sister-in-law and their oldest daughter in El Dorado around noon. They have a print shop, too, and had recently moved to a new building, so Lyle was interested in seeing that. Our niece has set up a printing museum with vintage equipment in one corner of the shop. I don’t know why I didn’t take pictures while we were there. Too busy talking, I guess. After touring the building we went to lunch with them… and then continued our trek west. 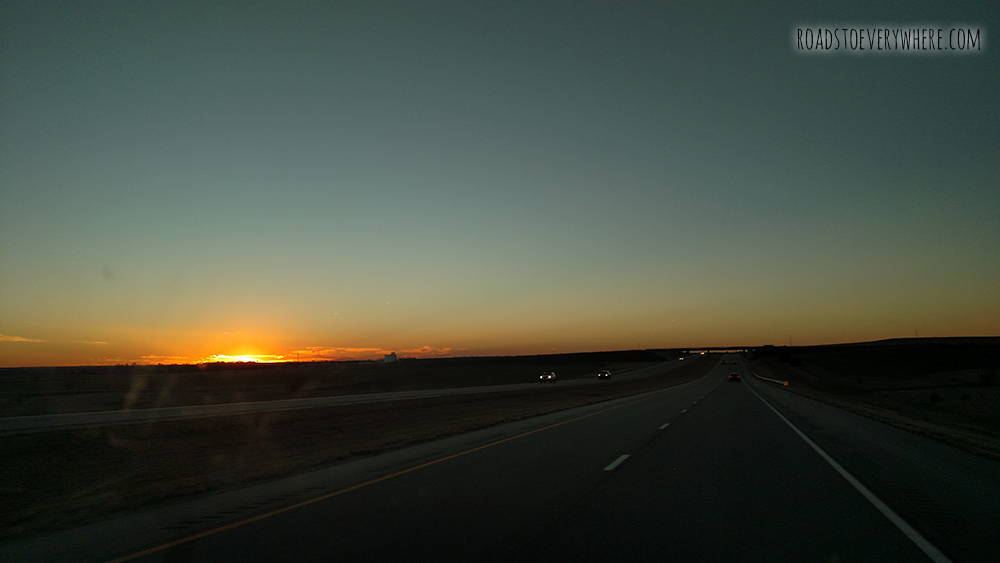 Our destination that day was Limon, Colorado. We enjoyed watching the sunset over the prairie as we drove. We were in bed by 9:00 p.m. Mountain Time and we didn’t even try to stay awake to see the new year in. 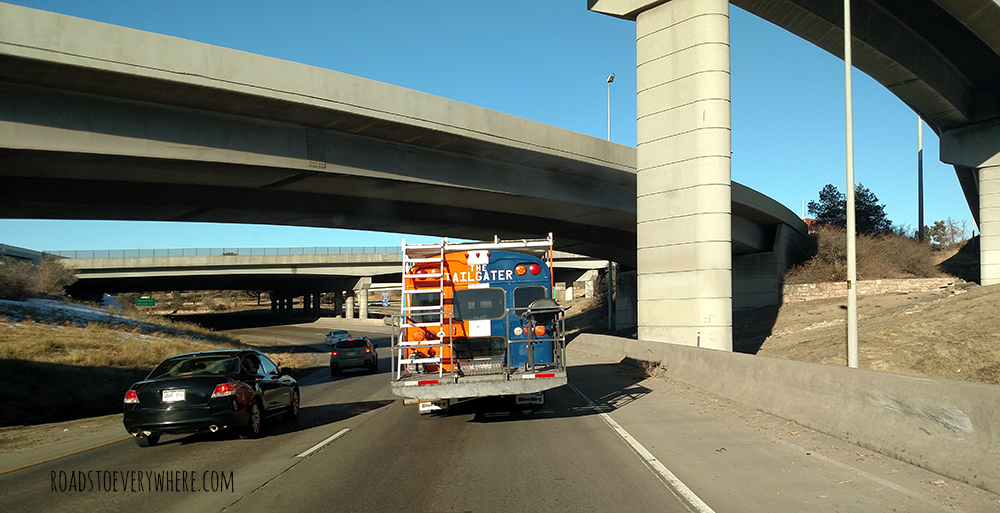 As we came into Denver the next morning we guessed that it must be a Broncos game day. Lyle wasn’t sure, so I googled to find out that yes, indeed it was. There are sure a lot of people in Denver who love their football! As Lyle said later, it felt weird for Denver to feel so familiar to us. For years it was just a city we passed through on our way to somewhere else… and then we lived there for 2.5 years. This was the first time we had been back since we moved.

Since it was Sunday morning we were able to attend “our” church in Lakewood and visit our church family. It was so good to see our friends and catch up a bit. And again, I think I was talking too much to take any pictures. 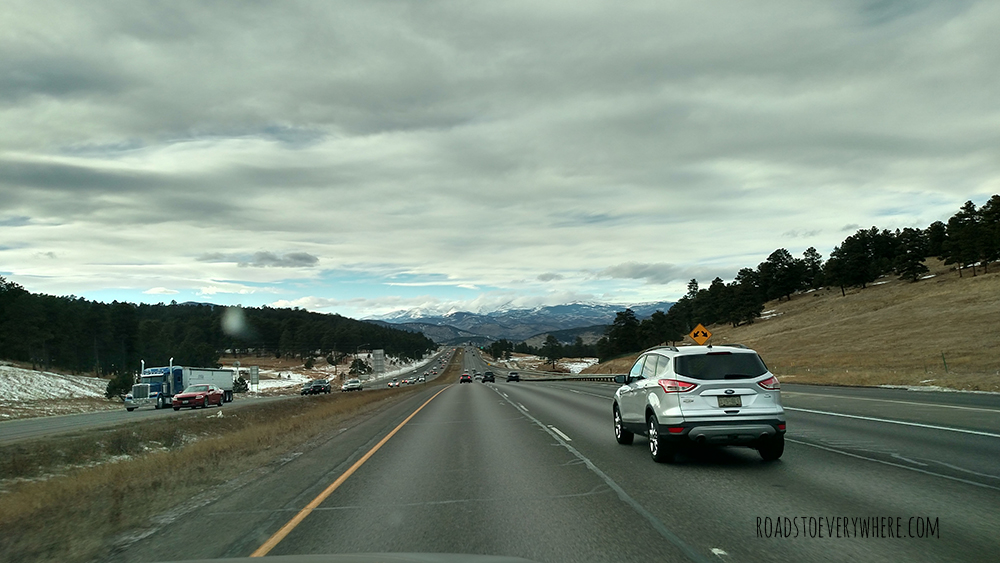 After dinner we got back on I-70 and headed over the mountains. 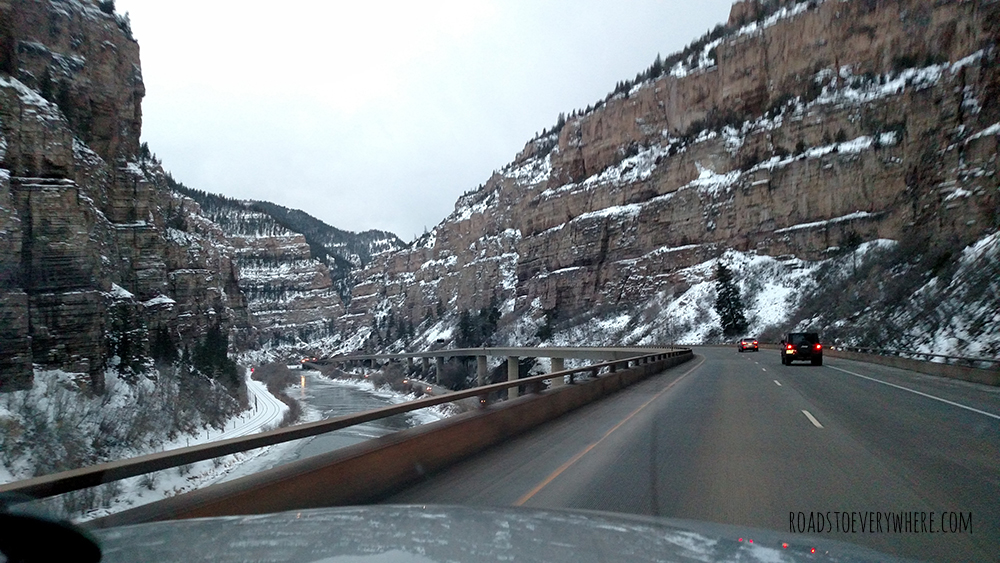 This part of the highway is so interesting to me, with the westbound lane elevated up above the eastbound lane because the canyon is so narrow. The railroad runs along the other side of the river through there. Our destination that night was Price, Utah. 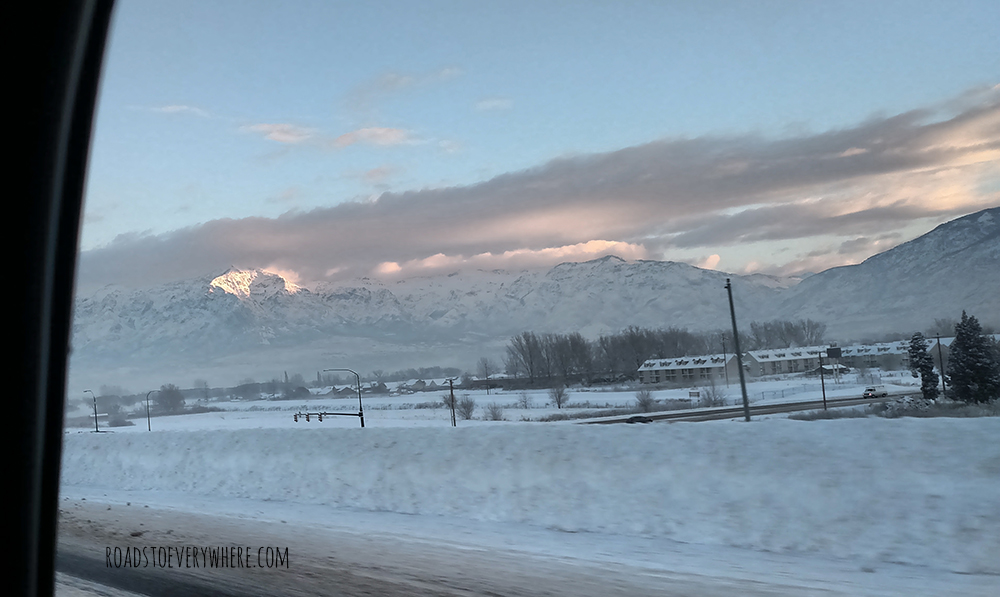 The worst road conditions we had on the whole trip were that morning before daylight. It was snowing pretty hard and our route was a 2-lane mountain highway with poor visibility. We were glad to finally get back on the Interstate about daylight. 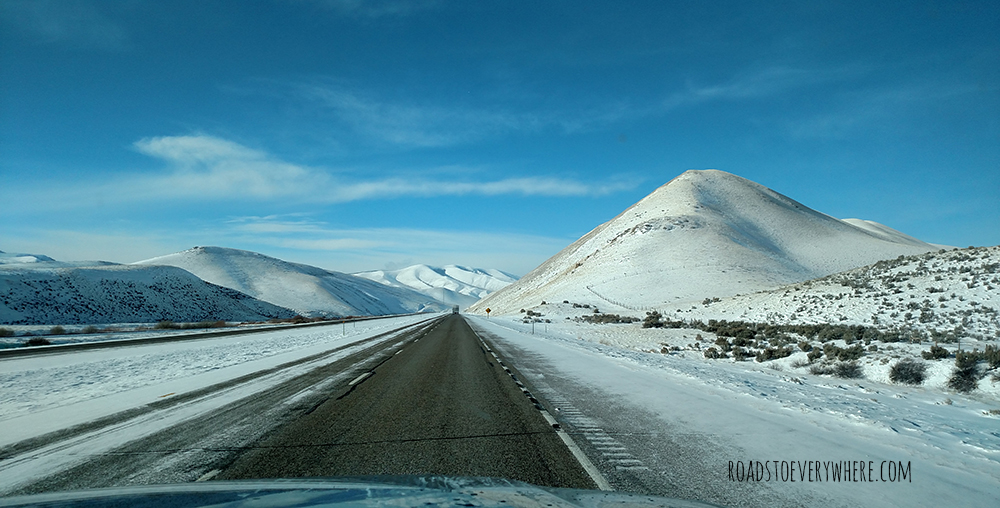 We drove up through Utah, southeastern Idaho, and northwestern Montana. The bright sunshine on the snow made for beautiful (if glaring) scenery, but it was bitterly cold that day.

We crossed Lookout Pass on the Montana-Idaho state line at sunset. (Yes, our route took us through a lower corner of Idaho and then into Montana, before going back into Idaho. Ever noticed what a weird shape the state of Idaho has? Don’t even get me started on the time zone lines!)

And so we made it safely home. It had been a fun winter road trip and we were grateful for “traveling mercies,” as they say.