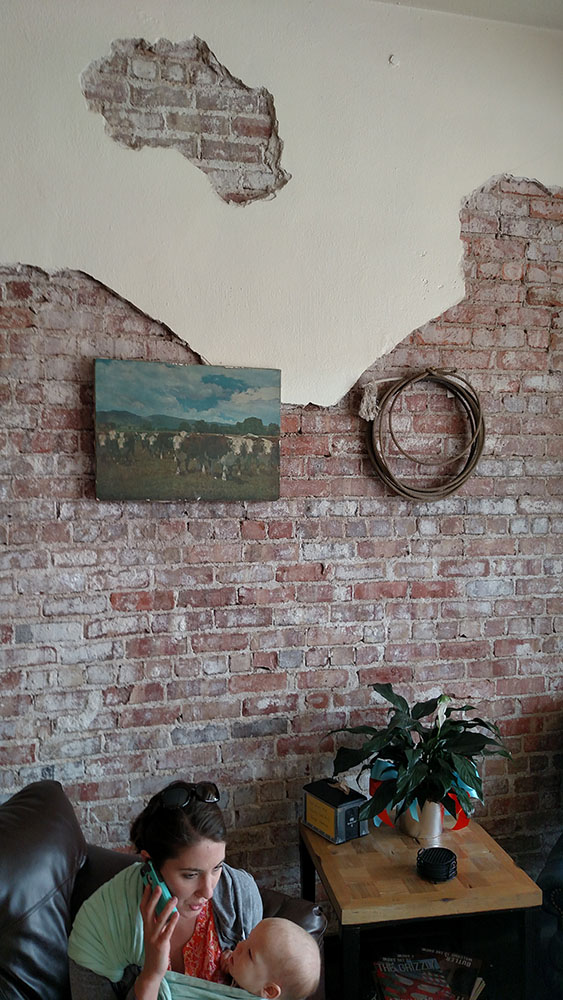 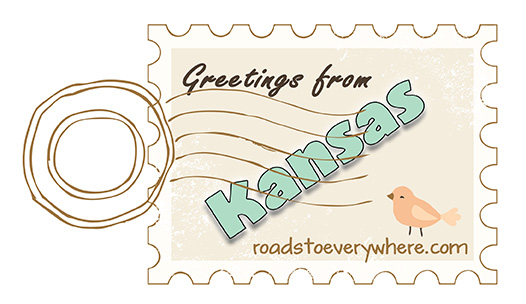 Day 16 of our virtual road trip takes us west from Missouri to Kansas.

For some reason, I had a hard time thinking of a story to tell about Kansas for this series, even though it was the longest I had lived in any one place at that time. Apparently it’s easier to remember things that happened in a specific place when you are only there a short time.

So I asked Lyle: “What should I tell about Kansas?”

“I don’t know. Drive out to the scenic overlook?”

We did do that a good bit. It was just a couple miles outside of town, and we would go out there and sit in the car to talk when we had something we needed to hash out. But I don’t remember any specific stories to tell about that. And since it was before the days of digital photography, I wasn’t as active in taking random pictures then. 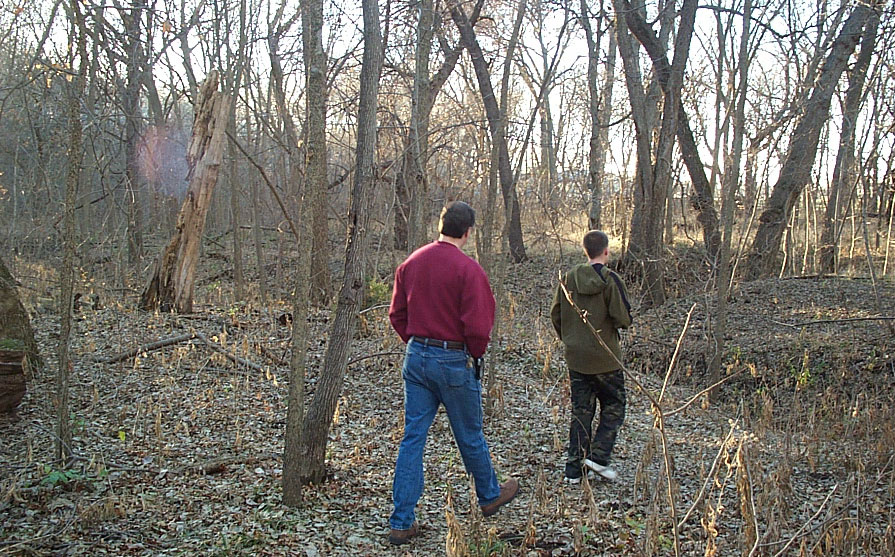 Mm-kay. That was a developed trail out by the lake. Not that you could see the lake from the trail. Or much of anything really, except trees. Which I guess was something, seeing how it’s Kansas. No stories there really. Except the time we took our nephew geocaching there in 2002 when we were back for a visit. And even that wasn’t exactly eventful.

“Kansas is where I learned the printing trade.”

Lyle actually grew up in his dad’s print shop in California and worked for his dad for a couple years as a young adult, but in Kansas he worked for one of his brothers and learned to do pretty much everything in the print shop. I found one of his business cards from 1986… and yes, he did print it straight. I couldn’t seem to get it straight on the glass when I scanned it. He’ll probably wince when he sees it.

“We lived in little cheap houses there.” 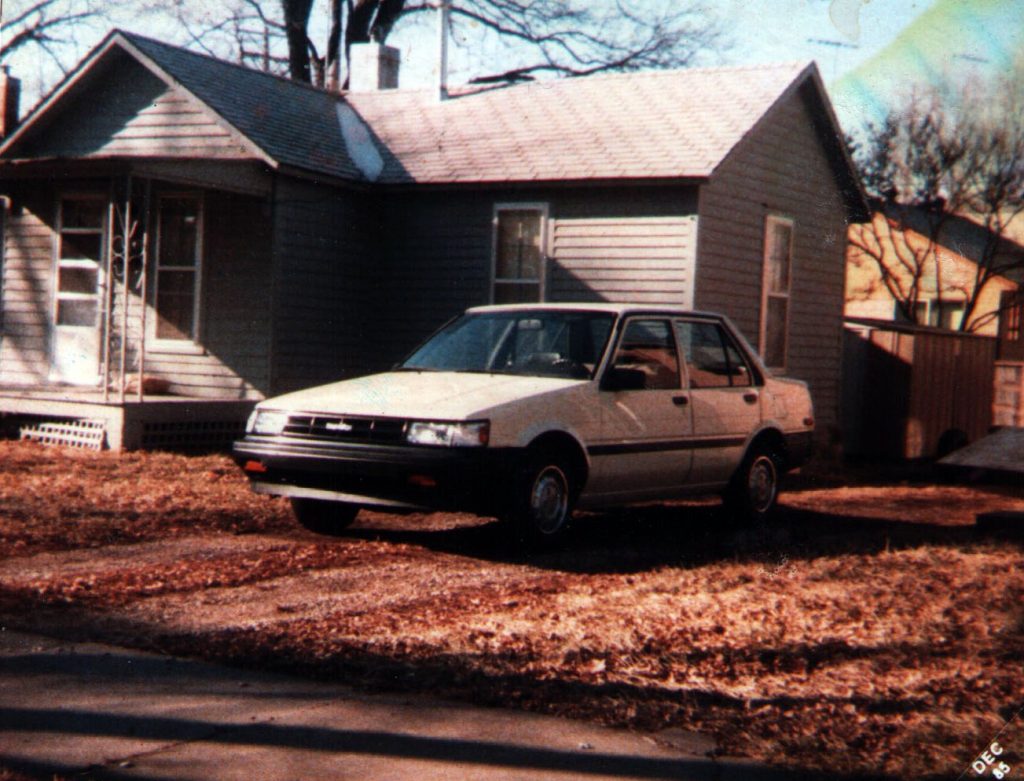 Indeed we did. This was the first little house we lived in. Rent was $175! After a few months we moved from it into a duplex because rent was $145! Granted, that was 30 years ago, but still…

“We lived in Kansas when our babies were born.” 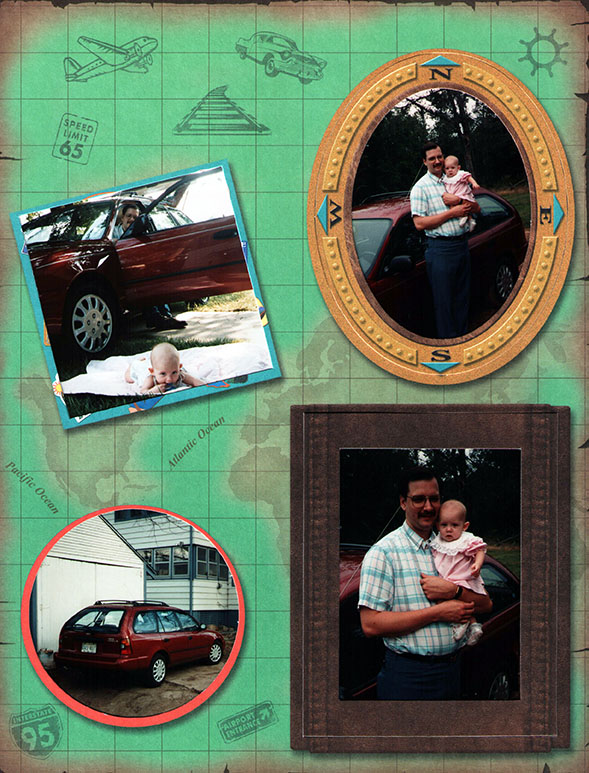 I have lots of pictures of our babies, naturally, but most of them are inside the house… not exactly representative of Kansas. Here are some of Lyle and Laura parked outside the house we eventually bought for $25,000. See? Cheap!

One thing I liked about living in Eldorado was how close everything was. Lyle and I got by with just one car practically the whole time we lived there. Here’s an excerpt from a letter I wrote my parents the week after our wedding:

Dear Daddy, Mother, etc.
Well, it’s been a week now and it still doesn’t quite seem real. We’re just about settled in…

This is a really nice neighborhood. Lots of interesting things within walking distance. The library’s only 3 blocks down the street, and there’s a park two blocks in another direction. The church down the street plays chimes every so often. Yesterday morning I heard “What a Friend We Have in Jesus.”

Lyle’s brother’s family also lived within walking distance and I loved to take their little girls for walks all around the neighborhood, but especially to the library. We would check out stacks of picture books and then take them home so I could read to them.

This past spring we happened to be visiting Eldorado. One of my nieces suggested we go for a walk! This time we took two of her little ones with us.

You can read about that nostalgic walk here:

Have you been to Kansas? If so, please share a memory in the comments! That will make this series even more fun!