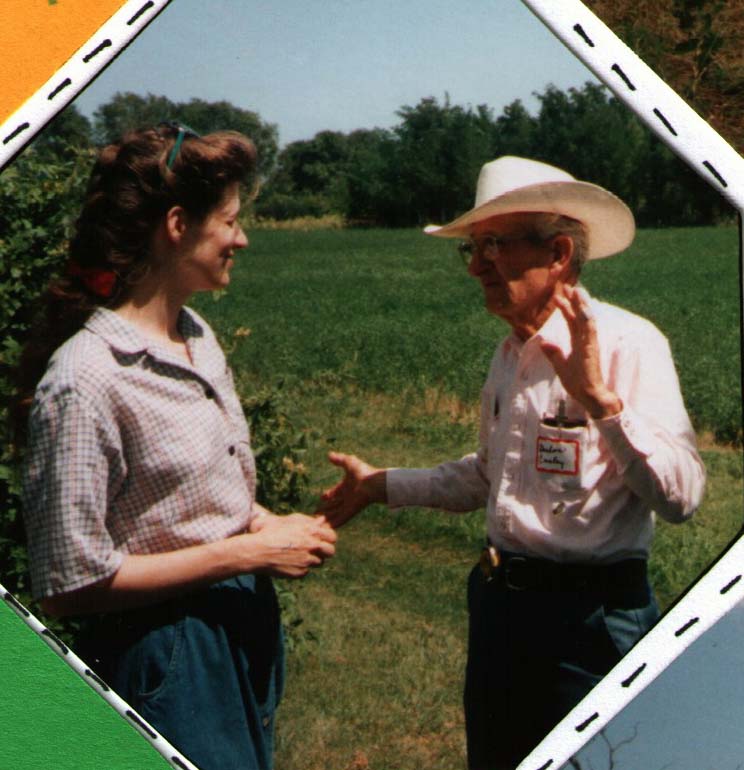 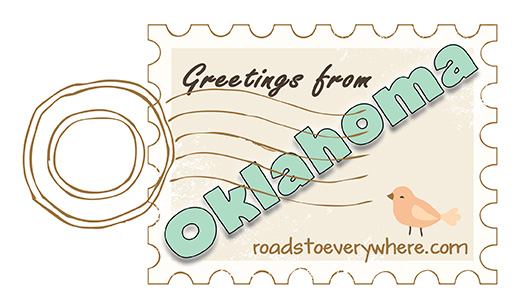 The third day of our virtual road trip takes us north from Texas to Oklahoma.

Three of my great-grandparents were still alive during my growing-up years. They were all three on my mother’s side and they lived in Eldorado, Oklahoma–a tiny town in the arid southwestern part of the state where my mother grew up. We went to visit them several times when I was a child. 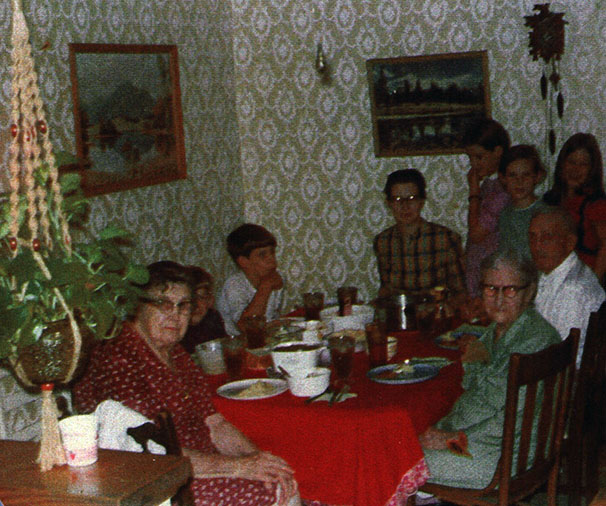 Later, as a young adult, I was able to visit Eldorado again. My great-grandparents were no longer with us, but Granddaddy took me around to the old farms and places of interest and shared some of his memories.

I carried a small tape recorder along to preserve the stories he told me. Later, when I was taking a creative writing class, I fictionalized some of his stories. Here is one of my favorites.

Charlie and the Government Man

The kerosene lamp in the center of the table cast a warm glow in the kitchen. Mama opened the oven and took out a pan of cornbread.

“Mama, when are we gonna eat? I’m hungry!” Gordon asked.

“We’ll eat as soon as your papa and Charlie come in from doing the chores. Now, go get your hands washed.”

Gordon went over to the washstand beside the back door and dipped the tips of his fingers in the water. He reached for the towel.

“Yes, ma’am.” Gordon reluctantly reached for the bar of lye soap in the dish behind the wash bowl. “How did Mama know I didn’t use soap?” he grumbled to himself. “She wasn’t even looking. She was stirring the beans.”

As he was swiping his hands on the towel his heard footsteps outside. The door opened and Papa came in. He was followed by Charlie, the lanky young hired man.

“Mmm. Smells good,” Papa said as he reached for the soap.

“Nothing wrong with that,” Papa declared. “It’s hot and filling. Sounds good to me.”

“Well, it’s ready. Just let me pour the coffee,” Mama said, reaching for the pot on the back of the stove.

Papa pulled out his chair at the head of the table and sat down. Charlie ambled around to the other end of the table to take his seat. Gordon climbed up on the bench along the side of the table.

“Coming, Mama,” was the reply from the other room. Thelma was six and Mama sometimes let her rock the baby’s cradle when Mama was busy doing something else.

“Did Lawton go to sleep?”  Mama asked as Thelma came into the kitchen.

Mama put the cornbread on the table and sat down. She folded her hands in her lap and bowed her head. Everyone else followed suit. Then Papa offered thanks.

When the prayer was over Mama began dipping the steamy hot beans into individual bowls. 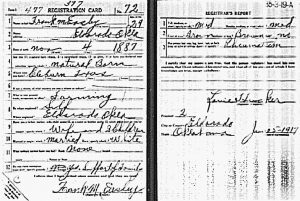 “I know. I had hoped the war would be over before it came to this. But they’ve been fair and allowed me to stay home this long to take care of the farm and the family. Now I guess it’s my turn to help win the war.”

“When do you have to go, Frank?” Mama asked.

“Well, I go next week to Oklahoma City for a physical and mental examination. Then I’ll be on a waiting list to be called whenever they need men,” Papa replied.

“So you don’t have to go right away?”

“Well, that’s a relief, anyway. I just pray that this terrible war will be over soon,” Mama said.

“Mama,” Thelma said as soon as she had a chance to speak without interrupting, “can I have some sugar in my clabbered milk?”

“Me too, Mama. I want sugar in my clabber, too,” Gordon said.

“Not this time, children. We have to be careful with the sugar. But you can have some honey for your cornbread.”

“You kids better be careful,” Charlie spoke up. “The government man, Herbert Hoover, might get you if you eat too much sugar!”

“Why, he’s the man who goes around getting little kids who eat too much sugar!”

Gordon and Thelma looked at one another. They were not sure they believed Charlie. Until the next afternoon…

Dinner was over. Thelma was helping Mama wash the dishes. Papa was stretched out on the floor of the porch with a brick under his head. He always took a little nap after dinner before heading back to the fields. Gordon sat beside Charlie on the steps and played with one of Betty Fay’s kittens. Suddenly they heard a roaring overhead. Papa sat up and called Mama and Thelma to come out.

“Look, children. It’s an aeroplane.” Papa pointed up to the bi-plane as it flew over the farm.

“Where’s it going, Papa? Who’s in that aeroplane?” Gordon wanted to know.

“The government man is in that aeroplane,” Charlie said before Papa had a chance to answer. “And he’s coming to get you kids for eating sugar!”

“Papa, is he?” Gordon was worried. He did not trust the government man. Anybody who denied little kids sugar in their clabber was not to be trusted.

“No, Gordon, I don’t think so,” Papa calmly replied. “I expect the government man has better things to do than going around checking on little kids.”

That made Gordon feel a little better, but he carefully watched the aeroplane to make sure it would not land in one of Papa’s fields. It finally passed out of sight and Gordon relaxed. 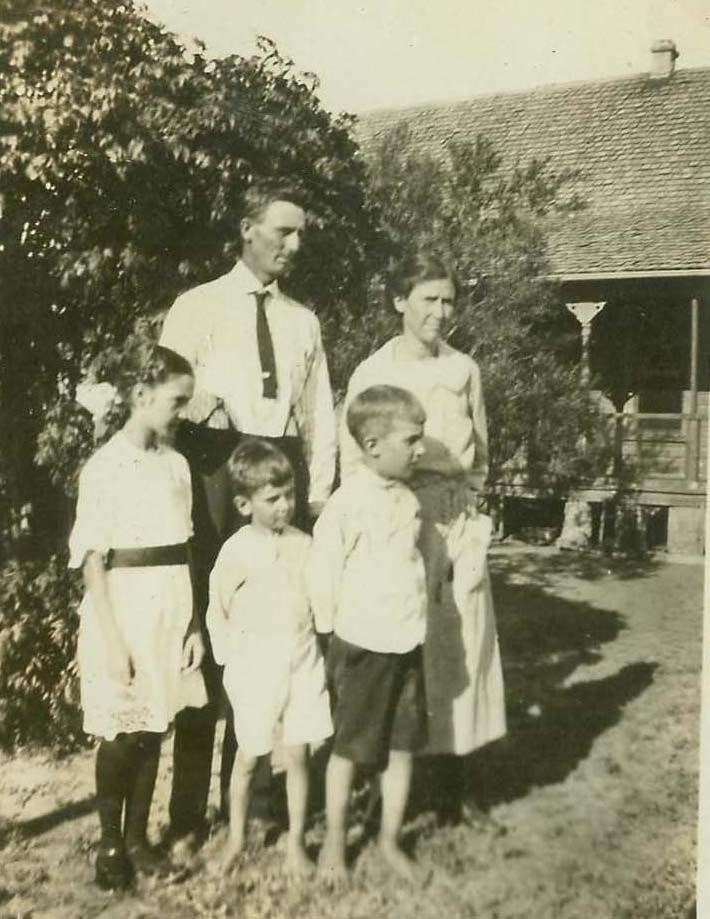 Papa made the trip to Oklahoma City the following week to be tested for the army. When he returned the whole family, along with Charlie, took the farm wagon to meet him at the depot in Eldorado. Papa drove the team home, then unloaded his purchases.

The children gathered around to see what Papa had brought. There was a stick of striped candy each for Gordon and Thelma. He had brought a bolt of blue calico for Mama. The remaining package he unwrapped was for himself.

“Look at these overalls, Kate,” Papa said as he held them up. “This striped fabric is something new. I thought maybe it wouldn’t show dirt so bad.” Papa’s overalls had always been solid blue denim before.

Gordon and Thelma looked at the new overalls once more. It was true. They had seen pictures of Uncle Sam in blue striped pants at the post office.

“Are you gonna be a soldier, Papa?” Gordon asked.

“Well, son, I hope not. It looks like this war is about over. In any case, army suits are drab green, not blue stripes. Soldiers don’t dress like Uncle Sam.”

“No. Charlie’s been pulling your leg again. Anyway, I’d rather be a farmer than a soldier, wouldn’t you?”

“I sure would, ’cause farmers get to wear pretty blue stripes like Uncle Sam!”

Interesting side note: Granddaddy (Gordon in the story) grew up eating unsweetened cornbread. That is, unsweetened except for the honey they would put on it. And so, in our family, we don’t put sugar in cornbread. I wrote about and shared my cornbread recipe back in 2008, if you’re interested.

Oh, and Granddaddy said “clabber” was kinda like yogurt. I can understand why the children would have wanted that sweetened.

Here are a few other posts I’ve previously written about that area of Oklahoma:

Have you been to Oklahoma? If so, please share a memory in the comments! That will make this series even more fun!