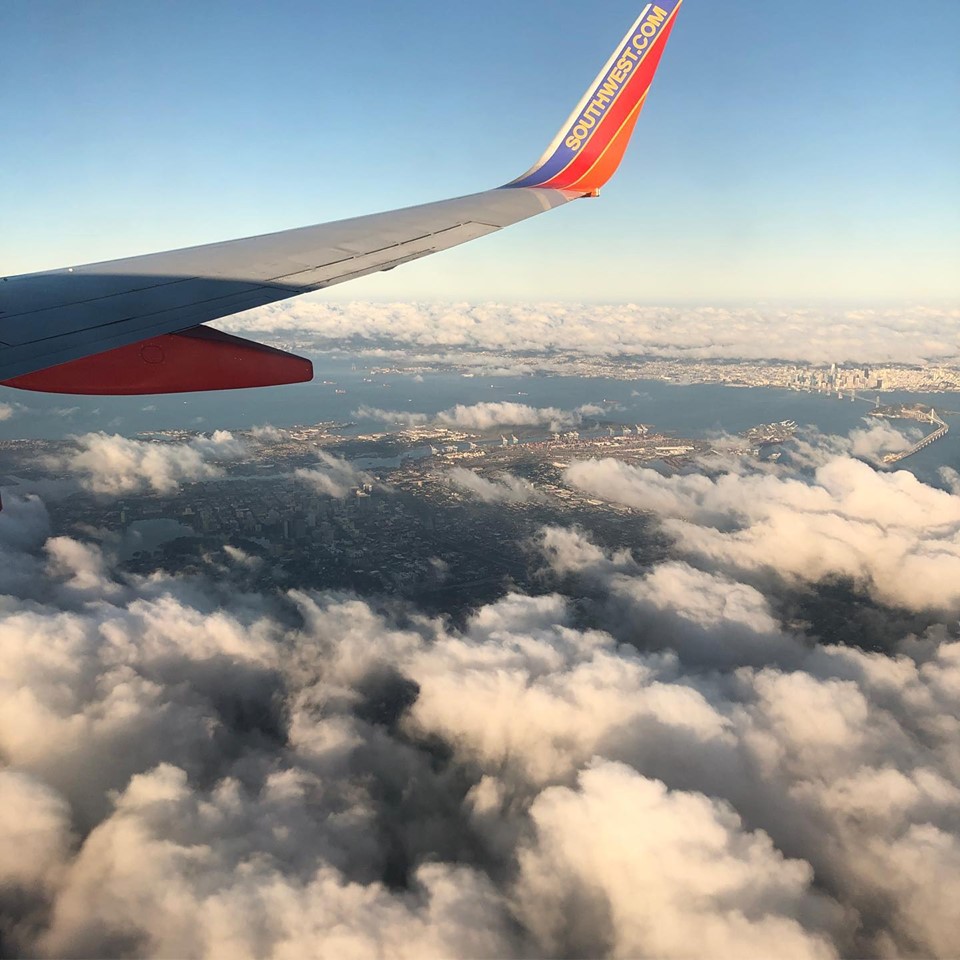 As you may have noticed, we are big fans of road trips.

Flying? Not so much.

In fact, my family of four had never flown anywhere together until this past weekend. We’ve flown individually and in twos and threes, but never all four at once.

Current circumstances are such that it just made sense this summer for us to fly, rather than drive, to our family reunion in St. Louis. (i.e. We had very limited time available.)

We chose to fly Southwest because of their “bags fly free” policy since I had some books and other items that I wanted to take to give away.

We probably won’t choose that airline again because it’s distinctively uncomfortable for “persons of size” such as Lyle and I. You know, taller than average and a little heavier than we’d like to be. But mostly “too tall” at 5’11” and 6’1″. I decided that the seats are about 6″ too narrow with 6″ too little leg room for my comfort. And yes, we’d have to pay more to get that extra space in business class (which Southwest doesn’t offer), which is why we circle back around to preferring to drive.

In any case, we flew west from Spokane, Washington to get to St. Louis because, of course, it makes sense to go to Oakland, California first. The flight to Oakland took about an hour and a half. The flight wasn’t full so we had a little extra elbow room which made that leg of the trip tolerably pleasant.

We had a couple hours to hang out there. We got coffee and set up “camp” in an alcove by the Hands-Only CPR training machine. We tried to convince the girls to go through the training exercises, but nothin’ doin’. After awhile the video-on-a-loop started driving us crazy so we moved to a different area.

Our second flight was close to four hours long. And of course, it was full. Needless to say, I was fidgeting and squirming and trying to stretch my leg out into the aisle every chance I had. I did have the aisle seat but I’m not sure that was an advantage because with the length of the flight people needed to use the lavatory and every single one of them bumped my arm as they passed. It couldn’t be helped.

We finally made it safely to St. Louis and had a lovely weekend, but I sure dreaded the trip back.

An hour or two before time to leave for the airport we got a text that our flight had been delayed 20 minutes, so we dawdled around a bit. Soon another text came that it had been bumped back 35 minutes. More dawdling. By the time we got to the airport the flight was over an hour late. We were very concerned because we had a connecting flight in Las Vegas with originally a 90-minute layover. That layover time had shrunk to 20 minutes. We wondered if we would be spending the night in Las Vegas.

In the meantime, we had plenty of time for even more dawdling. We walked around a little bit and went in the shops.

Something new that airports have added since the last time I flew is the doggy bathroom. Excuse me, I mean “Service Animal Relief Areas.” We saw these in each of the airports we were in.

I wonder if my dog would actually use such a facility. Because she knows the difference between real grass and astroturf, and one is not an acceptable substitute for the other in her mind.

We boarded our flight for Las Vegas. It wasn’t completely full but since Rebecca had gone home with her grandparents there were only 3 of us returning so we sat together. I admired the ingenuity of the guy across the aisle who worked on his music most of the flight.

Sometimes when flights are late and you aren’t sure of your connection the flight attendants will come around with more information or allow those with tight connections to deplane first. They didn’t this time. Lyle looked up a map of the Las Vegas airport and figured out where we needed to head.

And so, we hit the ground running. Pretty much literally. After trotting down the concourse until I was out of breath I told Laura to just catch up with Dad. I knew they would wait for me at the gate.

Soon I noticed another gentleman huffing along not too far behind me. He called to me, “What gate are you headed for?”

“Are you going to Spokane?” he asked as we ran along.

The Las Vegas airport is just enormous and there are all these blinking slot machines that you have to dodge around to get where you’re going.

Finally, I chugged around the last corner and there were Lyle and Laura waiting with the gate attendant. The jetway was still open so I knew they were waiting on us. Thank the Lord!

“There’s another guy coming!” I told the attendant.

“Yeah, there are about five more we’re waiting on,” he said.

“Oh, good! In that case, do we have time to run to the restroom?” I was sure we would be stuck in middle seats for the last flight home and I hate having to crawl out to use the tiny lavatories on the place.

“Sure!” he said. So Laura and I took off for the restroom.

As we boarded the flight we were told, “Probably only middle seats are available.” So we just took the first ones we came to. I did luck out with an aisle seat, but we were all split up, sitting with strangers. Still, we were very thankful to be on that flight.

From July 2009: There and Back Again: An Adventure