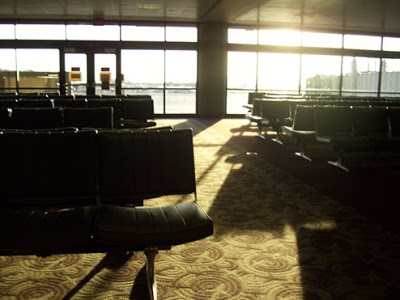 The past couple of weeks have been, to say the least, an adventure! Last Tuesday I bought plane tickets for my daughters and to fly to Louisiana for my grandmother’s funeral. We left on Thursday. Due to such short notice, the cheapest tickets I could find included 4 flights with lay-overs in 3 cities. Not only that, it was an overnight journey.

We left Spokane at 3:30pm. As I printed out our boarding passes we noticed that we had seats together for all the flights except the one from Phoenix to Las Vegas. I asked the ticket agent about getting that changed. He said that the flight was full so he couldn’t change it for us, but to ask at the gate in Phoenix.

The girls enjoyed the novelty of the first flight. In Phoenix we talked to the gate agent, who wasn’t able to get us seats together, but he moved us around a bit so we were closer together and with 2 aisle seats which made it more likely someone would be willing to trade as we boarded the plane.

We were in the last group to board and it was so crowded that I didn’t have the heart to ask people to trade with us, so I began to stow our carry-ons and tell the girls where to sit. I was so grateful when 2 ladies who were sitting in the row with one of my daughters offered to trade with us. I had the impression they were together, but they were willing to sit in different rows and give us their seats.

The funny thing about that flight, from Phoenix to Las Vegas, was how short it was. The flight attendants barely got the drinks served before they were coming through taking up the cups again. Another interesting thing was the sunset. It was dark when we left Phoenix, but as we flew west we watched the sun set again! It lasted for a long time, too. I suppose because we were traveling with it.

We knew we were in Las Vegas as soon as we stepped off the plane because of all the slot machines in the airport. We were to change airlines there, and we had a 3-hour layover. I did not see our flight listed on the Departures monitor yet, so I had no idea what gate to head for. I knew it was not the concourse we landed at, as those were all US Airways flights.

Some portions of the airport were completely abandoned at that time of night. Finally we got to the end of the C concourse and while I could see signs for D concourse, I still couldn’t find where to go. It seemed like every sign either pointed to a dead-end or had us walking in circles. So I asked someone else. Turns out there was a train we needed to ride, but the normal doors to the train were closed for construction and it was a quite obscure detour. No wonder I had such a time finding it.

So we rode the train and walked and walked some more. I was beginning to wonder if it would take us the full 3 hours to get to our gate! It didn’t. We still had plenty of time. The girls stretched out on the floor for a bit before time to start boarding.

The flight from Las Vegas to Atlanta was a red-eye. It was over 3 hours long. My under-the-seat bag did not fit under the seat in front of me, so I just put it under my legs for take-off, and then held it in my lap during the flight. It made a good platform to put my pillow on!

Our sleep that night consisted of mostly cat-naps on that oh-so-very-long flight. I know, 3 hours is really not all that long… but when it’s the middle of the night and you’d like to be sleeping, it seems endless.

The first order of business in Atlanta was to find a Starbucks. I felt much better after I had a cup of coffee. And I could tell we were in Atlanta because the airport announcer sounded just like Jimmy Carter!

Our flight from Atlanta to New Orleans was uneventful, but we were sure happy to get off the plane for the last time that night. As we stepped outside to wait for my mother to pick us up we were nearly knocked over by the heat and humidity that is standard summer weather in southern Louisiana.

We had a special time together with my dad’s family the next few days. The girls stayed with my parents to go home with them for a visit, while I flew back home.

My return flight was supposed to be much shorter, leaving New Orleans at 6:45pm CDT, with only one layover in Denver, then home by 11pm PDT.

As soon as I walked into the airport in New Orleans I noticed that my flight was already delayed by 45 minutes. Since I only had an hour to change planes in Denver, I was concerned about making the connection, but I knew that sometimes they can make the time up in the air.

We were nearly an hour late getting into Denver, and the last flight to Spokane for the night was the one I missed.

The airline put me up in a very nice hotel and gave me a $15 voucher for a meal. I would have much rather been home, but I decided to consider it an adventure. The meal voucher had to be used all at once. I couldn’t use half of it for supper that night, and the other half for breakfast the next day.

I didn’t need $15 for one meal, but the restaurants would not give change. So I decided to see if I would be allowed to spend it at the Rocky Mountain Chocolate Factory on candy. Sure enough, I was! So I blew the whole thing on chocolate to take home to my husband!

I finally made it home by early afternoon the next day. Whew!

That’s the end of that adventure… but stay tuned! We are setting off on another road-trip (our long-planned summer vacation) this evening, and I’m sure there will be many adventures along the way!