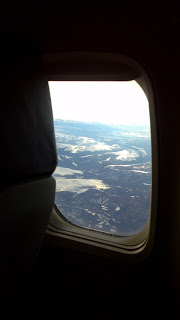 It’s been a busy, productive week. No time on Friday to post fragments… but who says they have to be posted on a Friday, right? I mean, it’s not like I get around to posting fragments every Friday anyway. Today’s fragments are related to travel. Mostly because I doubt you’d be very interested in the nitty-gritty of the workshops I attended in my training this week.

I love to people-watch when I fly. The airport is such a melting-pot of cultures and lifestyles. You just never know what you might see. The cutest reunion I witnessed was the little boy tightly clinging to Nana’s hand and gazing up at her adoringly, while Daddy walked ahead of them with Nana’s luggage. Nana was talking to her tiny grandson and clutching a hand-lettered sign reading “Nana” in large letters. Apparently, the little fella had stood beside the limo drivers holding up his sign as they waited for Nana to come from her gate.

As I stood in the line to go through security at the Denver airport, dreading the indignity of the ordeal, I smiled as I watched a family in line ahead of me with two young children. The mother was holding two tiny backpacks. The little girl asked for hers. “You can have it back after we go through security,” her mother told her. “The security people have to check it first.”

“Why?” the little girl wanted to know.

“It’s their job,” was Mommy’s simple reply. I guess that’s really what it boils down to, isn’t it? I tried to have a pleasant attitude as I took off my shoes and disassembled my luggage to pass through the scanners and x-rays, and then put it all back together again on the other side.

Flying Southwest airlines this time, I had been told that if you check in online 24 hours before your flight, you can board sooner. Seats are first-come/first-serve, so the early boarders get the pick of the seats. I checked in at exactly 24 hours (to the minute!) before my flight, and my boarding number was still B17, so there were a lot of people ahead of me… but a lot behind me, too. That was okay. Mainly I wanted an aisle seat (to have room for my long legs) toward the front of the plane.

As I boarded, the first aisle seat available was in the front row with plenty of leg room. I was tempted, but I didn’t see a place to put my carry-on bag, so I decided on move on back a bit.

Row 4 had a pleasant-looking older gentleman in the window seat with both the middle and the aisle seats open. I chose that one. I was hopeful that the flight wouldn’t be full, so that the middle seat would stay empty. It did.

My seatmate and I exchanged friendly hellos and then we both took out books to read as we waited to take off. Once we reached cruising altitude the old guy took out his iPod and put in earbuds. Then he started bopping his head and softly singing along with his music. I was smiling on the inside. Before long he dozed off.

After a bit the flight attendant came along and offered tiny bags of pretzels and peanuts. She didn’t disturb my seatmate. Later as she was serving drinks he woke up. Then she came around again to finish distributing snacks. She started to offer them to me again and then noticed that I already had some. My “friend” said, “I didn’t get any!”

“How did we miss you?” the attendant wanted to know.

“I think she brought hers with her,” the old guy told her, referring to me.

“No. You were snoozing when they came around before,” I told him.

“Oh! Was I sleeping? Well, that’s what old people do!” he said. I had to laugh because that’s exactly what I was thinking.

As we approached Spokane, I noticed the flight attendant taping to the wall a page from a spiral notebook featuring a neatly drawn and hand-colored picture of a Southwest plane in blue-crayoned sky. Aww… some child on the flight had presented it to the staff and they were putting it up where everyone could enjoy it.

After we landed I made my way to baggage claim. Soon after I got there, the red light starting blinking and the whistle sounded to alert us that the carousel was starting to move. Three little boys standing nearby started jumping up and down in excitement. I turned to smile at their mother. She smiled back, “The highlight of their day!” she said.

“Do they happen to be the ones who drew the picture that the flight attendant taped to the wall?” I asked.

“Yes,” she said. “My oldest did that. We had a flight from Florida to Denver this morning, and he did one on that flight, too. Keeps ’em busy!”

By then the boys were bumbling about their Daddy trying to “help” him claim their luggage. They desperately wanted to be the one to grab the bags off the carousel but Daddy wouldn’t let them. He lifted each bag onto the floor and then told the little guys to “take that to Mommy.” Immediately, they would come back to offer more assistant. Reminded me of puppies.

Those are the incidents that kept me smiling as I traveled to Denver and back this week.