Today, boys and girls, we are going to learn the alphabet. There will be a quiz, so pay attention, please!

This is a “weekend re-run” from 2009 featuring a darling vintage picture book that was among some other old books that were given to me that summer. The cover is missing and there is not a copyright date on it, but the title page lists the author as Dorothy Hope Smith. With a little sleuthing online I found another edition of the same book that says it was published in 1927.

I love the vintage pictures with the bright primary colors. Total eye candy. But the thing that fascinates me most about this little book are the names. Naming trends intrigue me. Apparently these were popular children’s names in the 1920s. A lot of them remind you of “old people” names, don’t they? And, of course, that would be because the children of the 1920s are senior citizens today. I did a little more research and discovered that at least half of these names were on the top 100 names list for the 1920s! 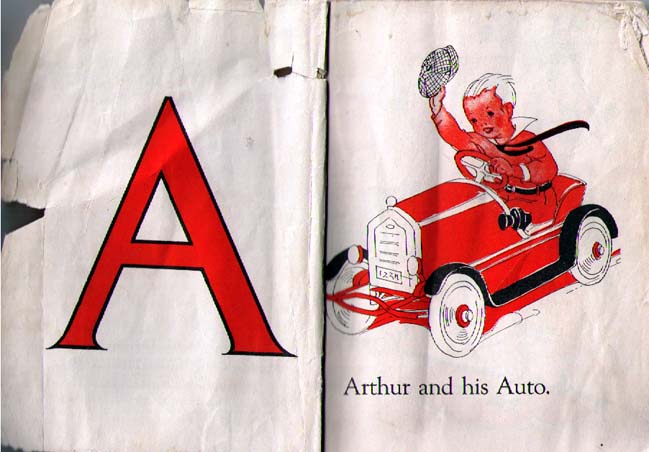 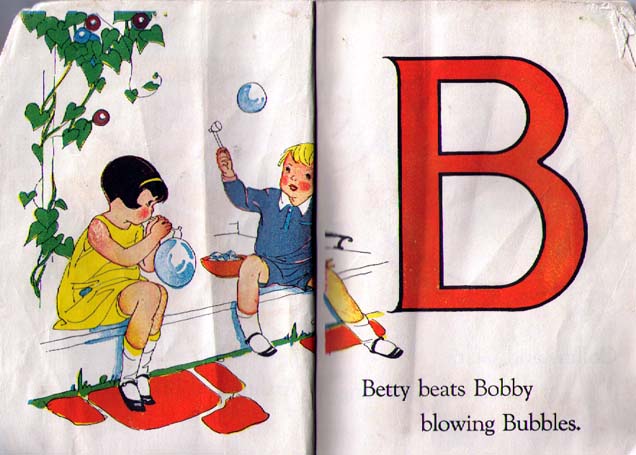 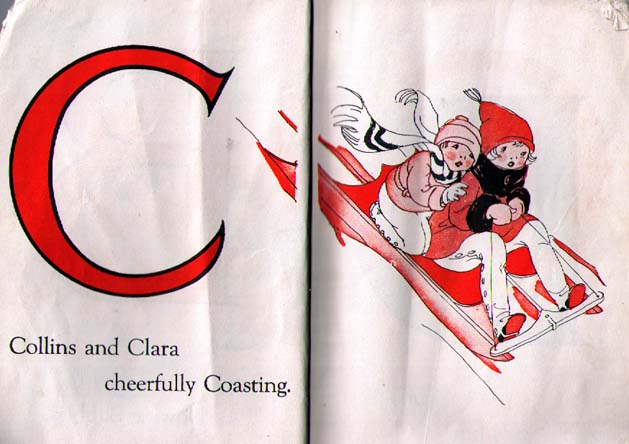 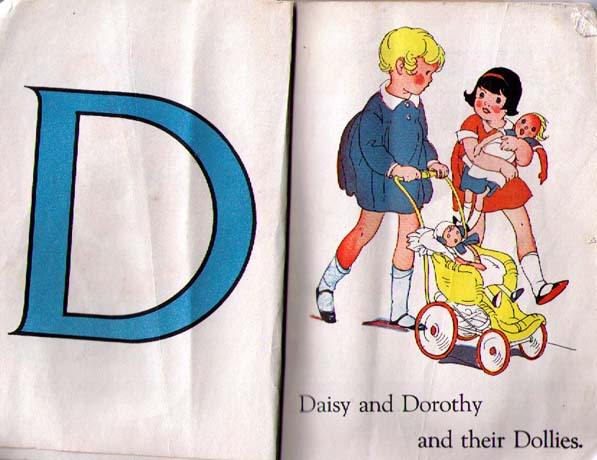 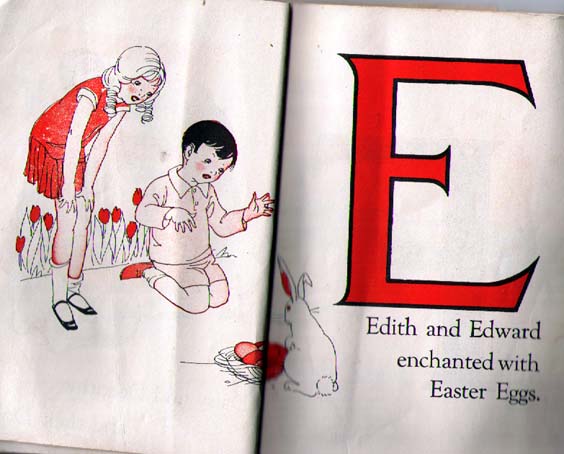 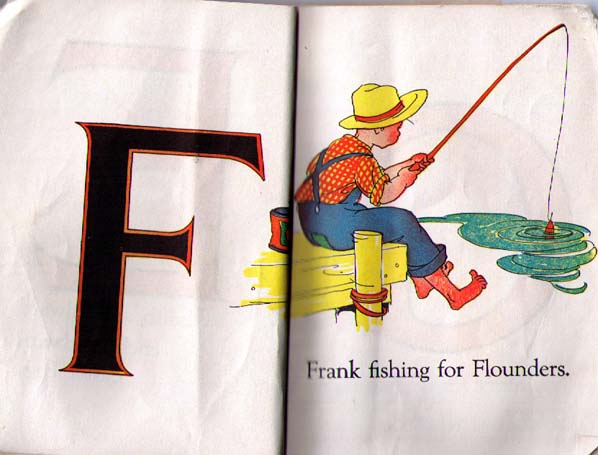 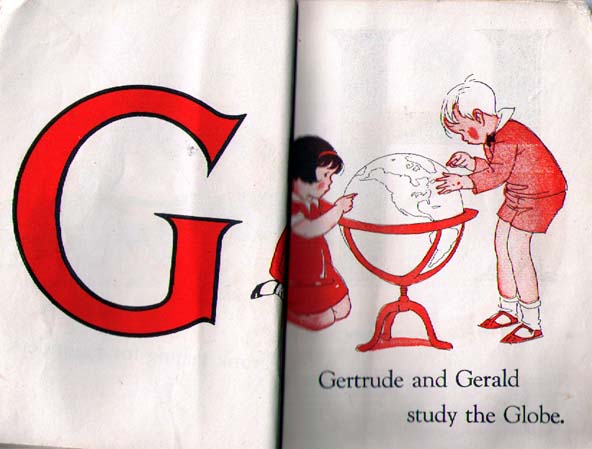 Apparently she couldn’t come up with a good verb that started with G to continue the alliteration. Let’s see… how ’bout, “Gertrude and Gerald gaze at the Globe”? Well, okay, it’s not quite as good a verb as “study” but still… 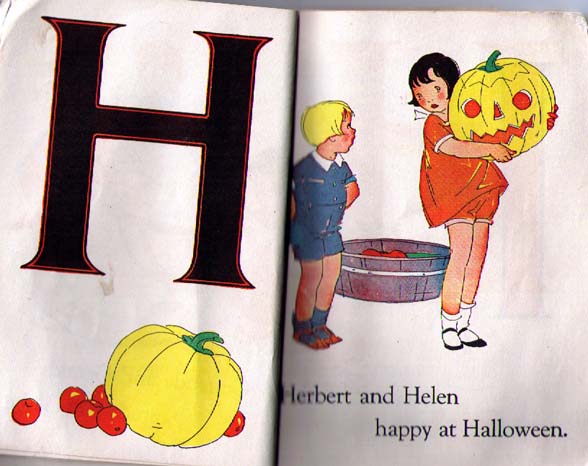 Those yellow pumpkins worry me! Helen’s dress is orange, but the pumpkins are yellow. 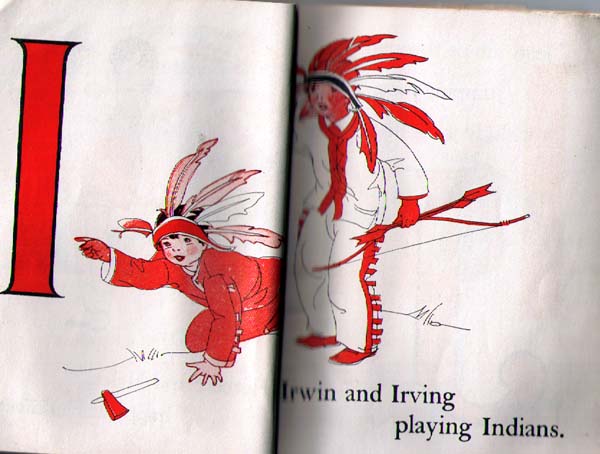 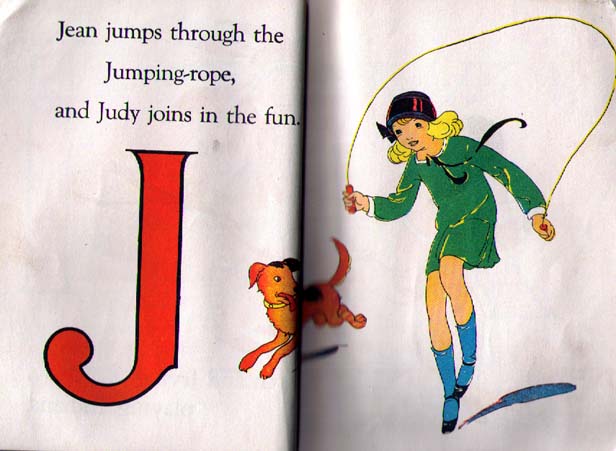 I never met a dog named Judy before, did you? 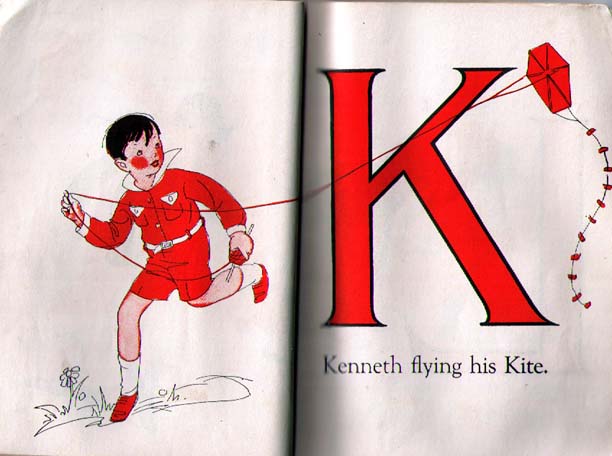 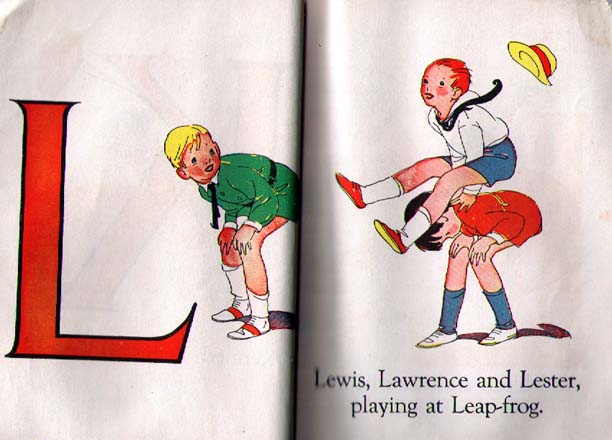 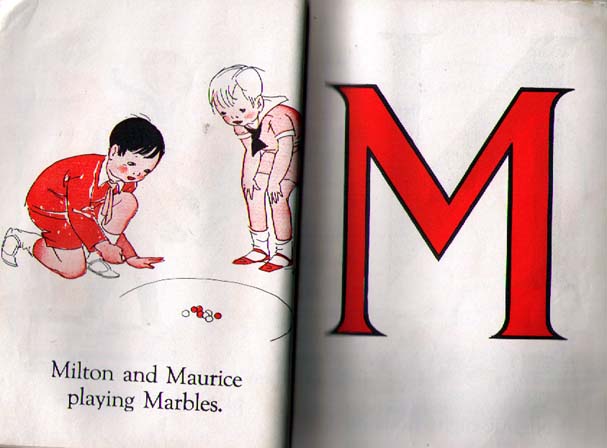 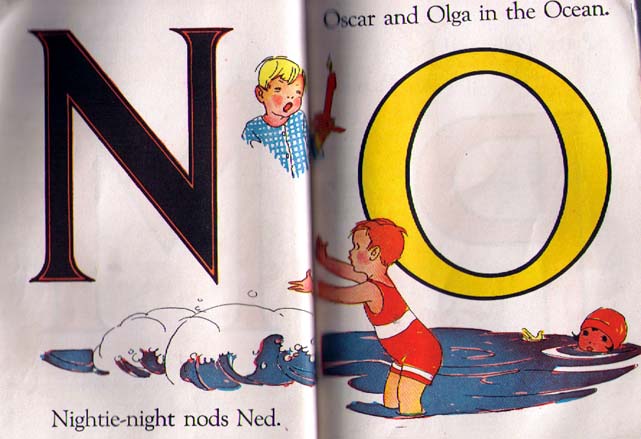 This page layout is just a little strange. For some reason N and O don’t get their own pages, so we having yawning Ned with his candle hovering over the ocean! 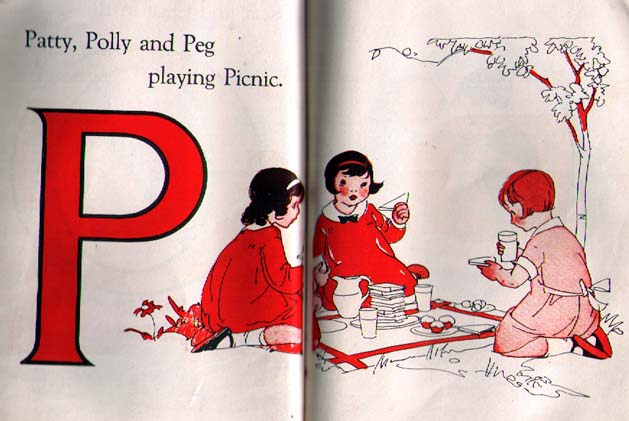 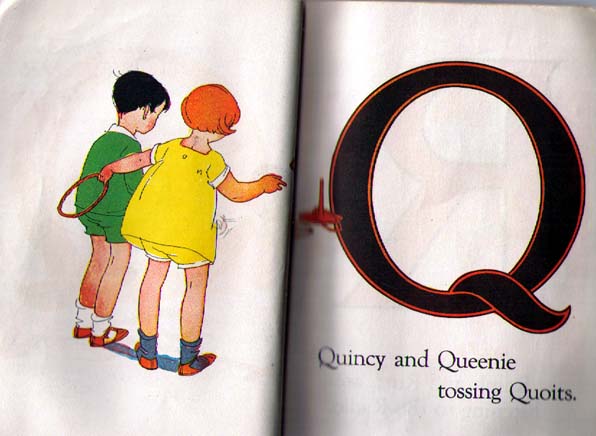 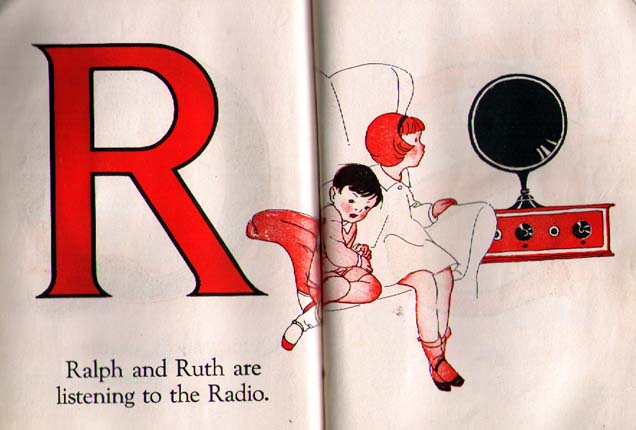 Awww… I love the old timey radio. So neat! 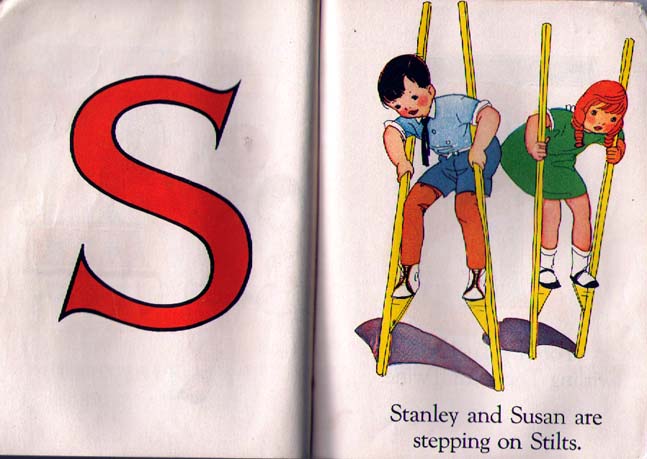 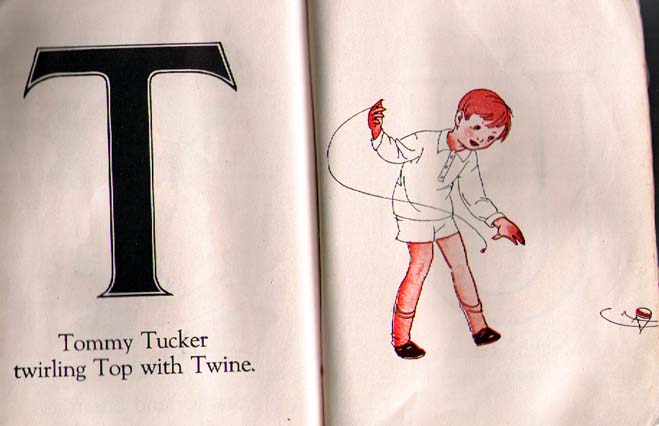 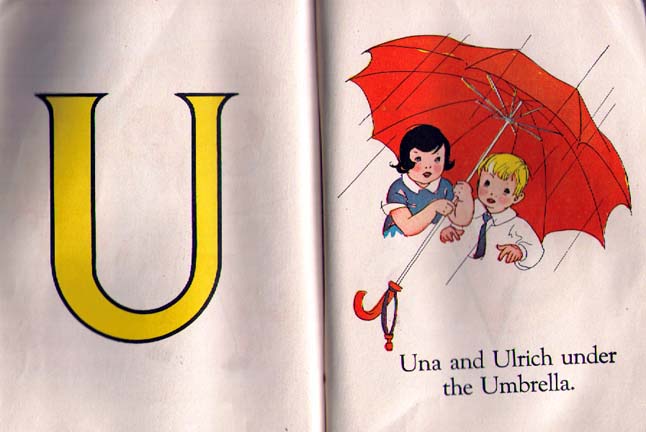 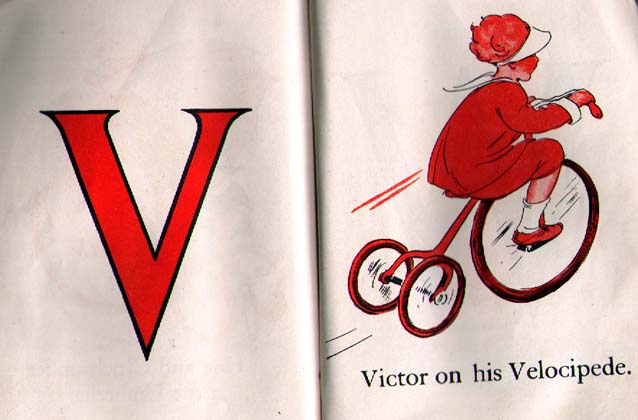 Can we assume that a velocipede is a tricycle?
No, we cannot!
A tricycle is a velocipede, but not all velocipedes are tricycles.
Betcha didn’t know that, didja? Or maybe you’re smarter than me! 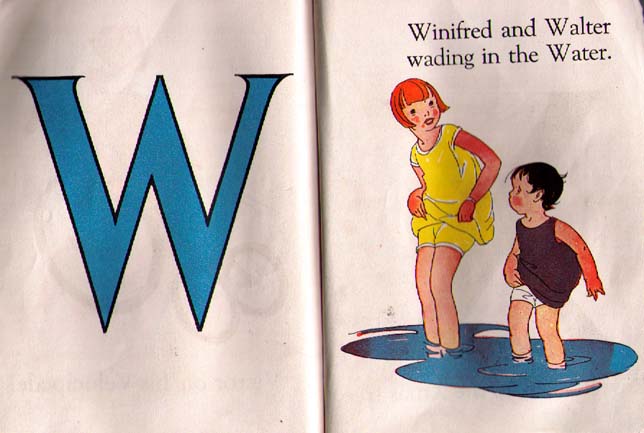 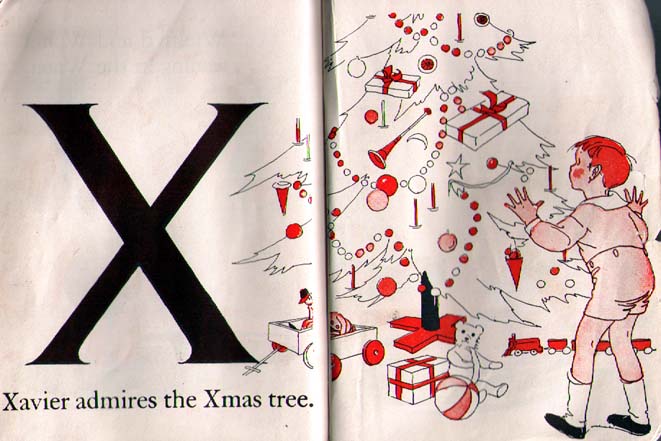 Also, I have a coworker whose little boy is named Xavier.

Names do come back in fashion sometimes. 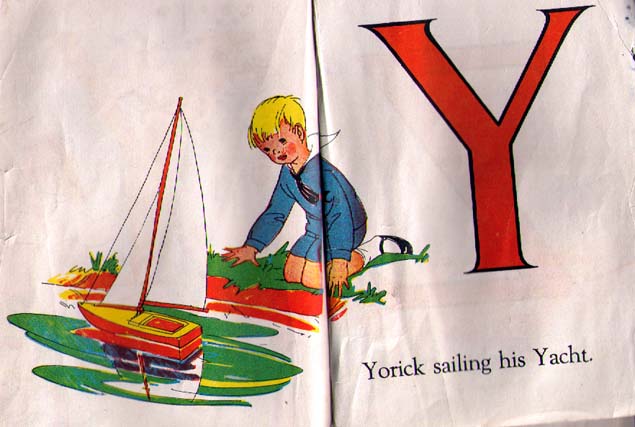 Don’t know anyone named Yorick, though. 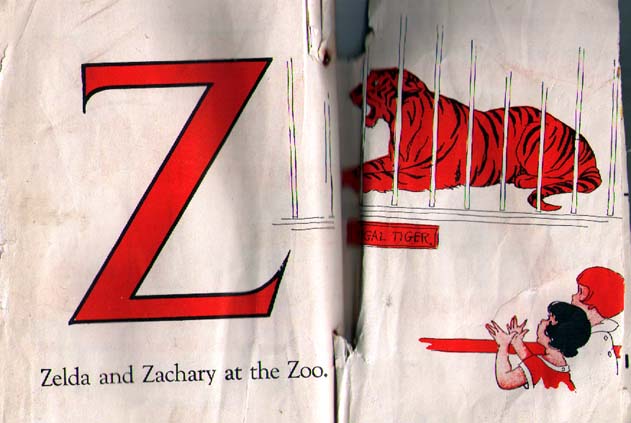 Now we know our ABCs… and it’s time for the quiz! Just two questions: