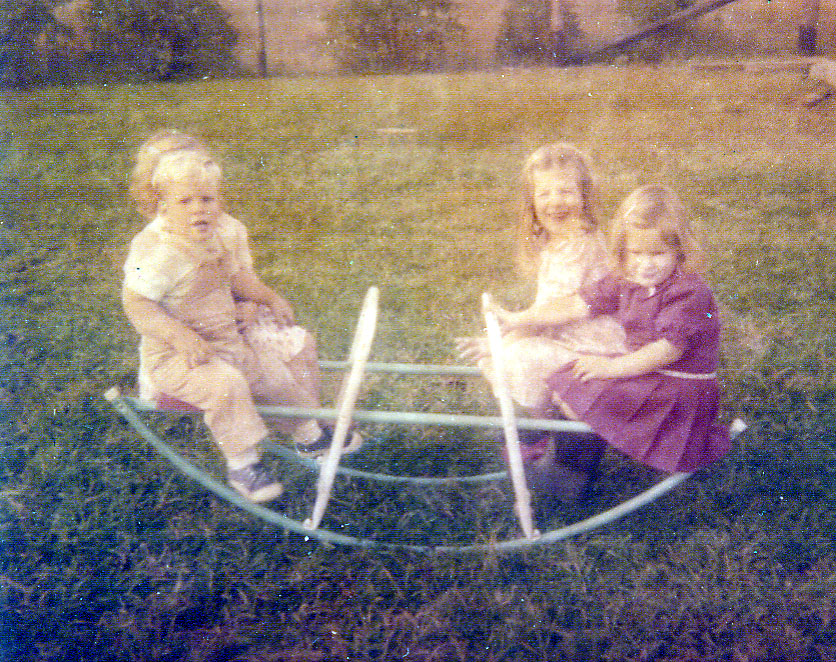 As you know, I’ve been blogging for awhile. During the month of October as I’m participating in Write 31 Days, I am sharing “re-runs” of some of my past posts on the weekends. Today’s post is one of my favorites. Here’s the back story:

Early in 2008 I had encouraged my aunt, Rachel, to start a blog. She’s only a few months older than I am so we grew up “together.” One day as I was helping her with her blog over the phone we were laughing about some of the silly things we used to do as kids. Good memories! I was telling her that I had participated in NaNoWriMo in November 2007, but instead of writing an actual novel I wrote my memoirs. Several of the stories in my memoirs naturally involved her, as well as my sisters and brothers. Just for fun, the next day I shared this one on my blog.

One time, when I was about 7 or 8, Rachel and we girls played a funny game of Let’s Pretend. It wasn’t funny to us then… just fun! …but as I got older and remembered the incident I had to laugh.

We were The White Sisters. This was an actual trio of sisters (with beautiful voices and close harmony) who had made some records in the 1950s or maybe early 1960’s. There were two or three of their records at Grandmother’s house and we were fascinated to read on the record jacket that their names were Joyce and Fay and I don’t remember what the other sister’s name was. Janet, maybe. But two of them were twins and the other was their older sister, just like us! So we were pretending to be The White Sisters. But with Rachel, there were four of us, so we decided Rachel could be the mother and she could play the accordion for us.

Because, of course, you couldn’t have special music without an accordion.

We believed this to be so because our church worshiped in the local old-country-school-house-turned-community building. Granddaddy had started the church just a few years earlier and the congregation would not have their own building for another ten or twelve years. The community building did not boast of a piano or organ, so our next oldest aunt–who was in high school at the time–played an accordion to accompany any singing, both congregational and special songs.

So. Rachel began to look around in the yard for something that could serve as her accordion in our debut as The White Sisters. Yes. The Jolly Rocker was the very thing! It was a teeter-totter made of metal tubes formed into a rocker shape with a plastic seat and a handle-bar at both ends. Rachel picked it up and held it against her chest, with the curved side of the rocker out and swayed back-and-forth with it as we sang.

I’m sure we made beautiful music.

Imagine my surprise to discover that The White Sisters are still around and they have their own website. You can even still buy their music. Also, my dad now pastors the church Granddaddy started all those years ago.

Before I get to that, here are some pictures that tie in with the story. I didn’t have them in 2008, but they will help you visualize the situation. (Also, I should explain that there’s a reason the pictures are so poor. You see, we didn’t have a lot of money. Or a camera. Every one of these pictures were taken on a borrowed camera and then the rolls of film laid in my mother’s drawer for years waiting for the day we would have enough money to have the film developed. Obviously, we eventually did, but it was almost too late by that time.)

And now… for the Rest of the Story:

In our little-girl minds The White Sisters were big celebrities, so I was very excited to get an email a few weeks after this story appeared on my blog from Fay White herself. Check it out:

One of my family members found your site today and forwarded it to us.

The article on the trio is so special and we were blessed!

Your website is very interesting and I look forward to going there again.

My sisters and I all live in Brooksville, Fl. and are together so much. Our health has not been real great for a few weeks but up until then we were singing in our church “The Wesleyan Church.” The Lord has continued to use our music via CD’s or articles like yours.

It was soooo special. Thank you,

Fay for Joyce and Janet
The White Sisters

Imagine that. I feel almost-famous myself.