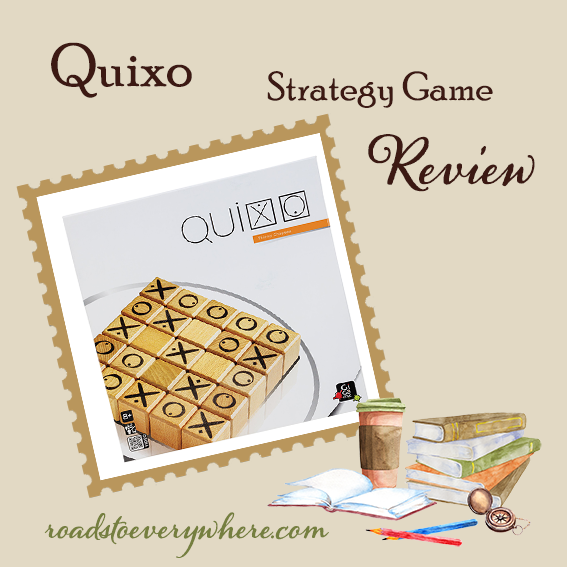 Disclosure: I received a complimentary game for review from Timberdoodle. All views expressed are my own.

Quixo is a two-person strategy game with a tic-tac-toe premise. It can also be played with four players in two teams.

A round wooden board with a square playing area carved out in the center holds 25 wooden cubes, each marked with an X and an O on two sides. The other four sides of each cube are blank.

At the start of the game, you set up the board by arranging all the cubes with a blank side up. Gameplay is simple. As with tic-tac-toe, you first decide who will be X and who will be O. The objective, of course, is to get five in a row.

The first player chooses any cube around the edge of the board. This leaves a gap on the board. The player turns his piece around until his symbol (X or O) is facing up. Then he slides the cubes from any end of the row to close the gap and places his piece in the new opening.

On subsequent turns, a player can either turn another blank cube over or remove a cube he has already claimed from its current place and slide it in at the end of the row.

It’s possible for all pieces to be turned over, and gameplay continue until someone gets five in a row. It’s also possible for some of the cubes to still be blank when someone wins.

First of all, I love how beautiful this game is. The wooden pieces are nicely polished and fit into the tray so well that it’s perfect for leaving out on a side table for a quick game whenever the notion strikes you. Out of the box, it’s a pretty decorative accent that might tempt kids to put down their phones for a minute to mess around with it.

We took it camping and found it great for that as well. Game set-up is quick and straightforward, and there aren’t cards or other pieces that will blow away or get lost if dropped. For that reason, it would also make a good travel game if space is not an issue. (It’s not a compact game.)

We also liked that there wasn’t a huge learning curve to get started. Our favorite part was that there is some strategy involved, and you don’t end up in a stalemate like with traditional tic-tac-toe.

Quixo is recommended for ages eight and up, but I’m confident younger children could easily play. They may not understand the strategy involved, so that it would be more of a chance game for them. Very little ones would probably enjoy simply playing with the blocks.