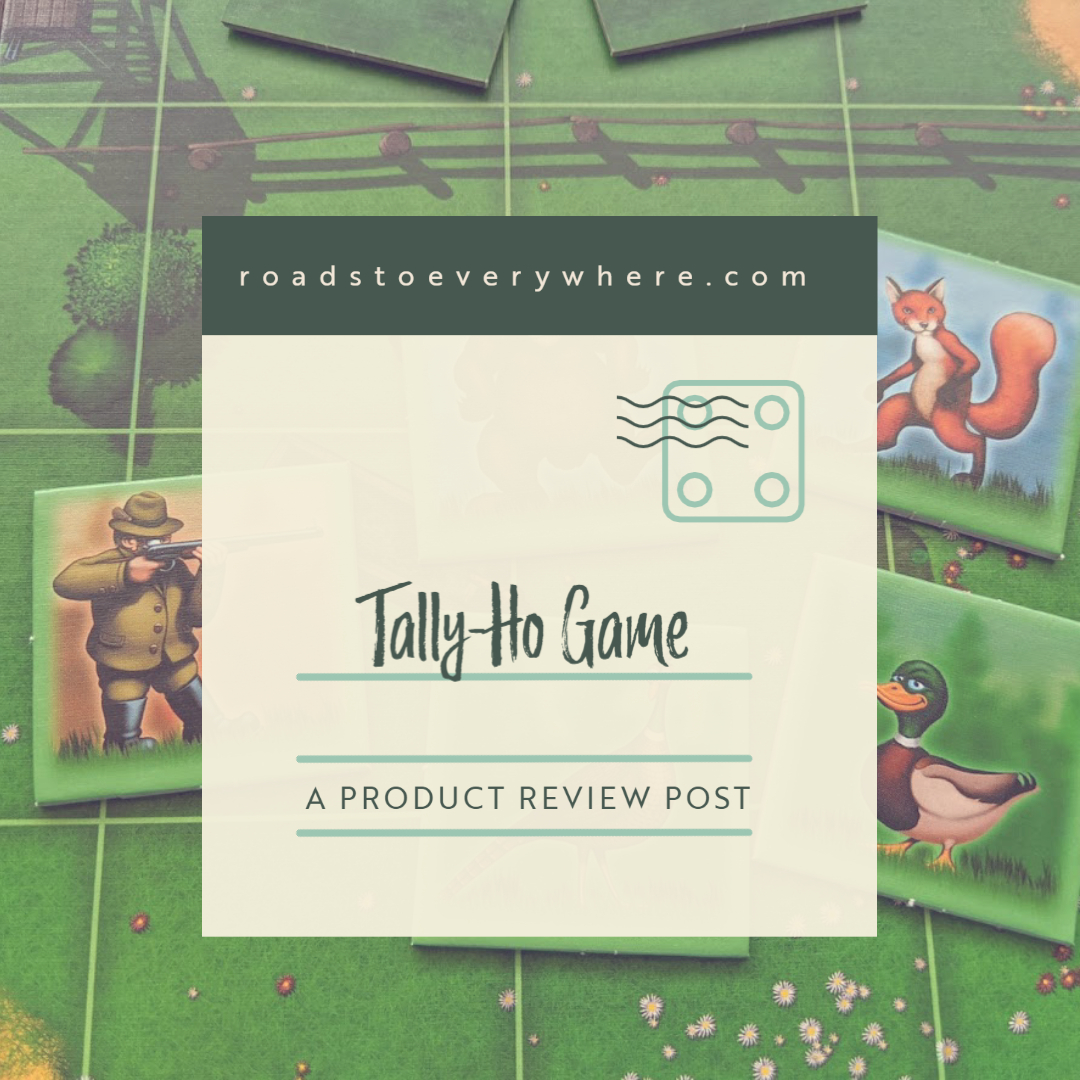 We’ve accumulated a number of great critical-thinking single player games over the years thanks to Timberdoodle’s careful curating. What I’ve found, though, is that these games rarely get played solo style. Almost always it turns out that a couple kids will put their heads together to work on a game as partners. I love that!

For that reason I was excited to learn that Timberdoodle is adding several two-player (or multi-player) games to their line-up for the 2020-2021 school year. Today I’ll be telling you about Tally-Ho which they sent me in exchange for my honest review.

I have to admit that game box is a little ominous looking. A giant smirking bear creeps up on the bug-eyed hunter who is peers down his double-barreled shotgun. A sketchy-looking fox and duck skulk on the sidelines. *shudder*

The game itself, though, is really a lot of fun. It’s a strategy checkerboard game with rules for the different pieces, similar to chess but not that complicated.

The game pieces are printed on squares of heavy cardboard. There are 2 bears, 2 lumberjacks, 8 hunters, 6 foxes and then an assortment of birds and trees.

You set up the board with the squares face-down on the grid. Before you start you need to decide which player will be blue and which one brown. It doesn’t really matter because a full game consists of two rounds. You trade colors for the second round.

On each turn you may either turn over or move a game piece. Obviously, at the beginning of the game you will start by turning over pieces. As you uncover pieces you’ll begin to have opportunities to capture other pieces based on their relative position on the board.

Who can capture whom? That’s where the strategy comes in.

The fox can capture the pheasants and the ducks.

The bear can capture either of the men.

The hunter can capture any of the animals.

The lumberjack can capture trees.

A piece can capture another piece if it’s adjacent to it. Or, for some pieces, if it’s positioned further down the row with open spaces in between. The fox can just slide right over into the square where the pheasant is. The captured pheasant is removed from the board.

One feature that adds a twist to the strategy is that the hunter can only capture animals in his direct line of sight based on the direction his gun is pointing. Since the pieces are face-down to start with it’s important that they are always flipped over in the same direction which helps randomize the direction the hunter’s gun might point.

In this particular game set-up there are 6 hunters revealed so far and not a single one of them is in a position to capture anything. The one closest to the middle is adjacent to two ducks but he can’t get either of those because his gun is not pointed at them. Same with the hunter towards the top. In fact, the only piece on the board at this time that is in a position to do any capturing is the fox in the upper middle. He can capture the duck above him.

Of course, the game is far from over because all the pieces except the trees are capable of moving and the more spaces that open up the more opportunities there are for capturing your opponents pieces.

Tally-Ho is recommended for ages 8 and up. The estimated playing time is 30 minutes. I would say that’s pretty accurate. As with any game it took us a few practice rounds to learn the rules, and winning was pretty much by chance. It’s much more fun now that we are beginning to learn the strategy of the game.

If you’re looking for something different in the way of a two-player game this would be a good one to add to your collection.