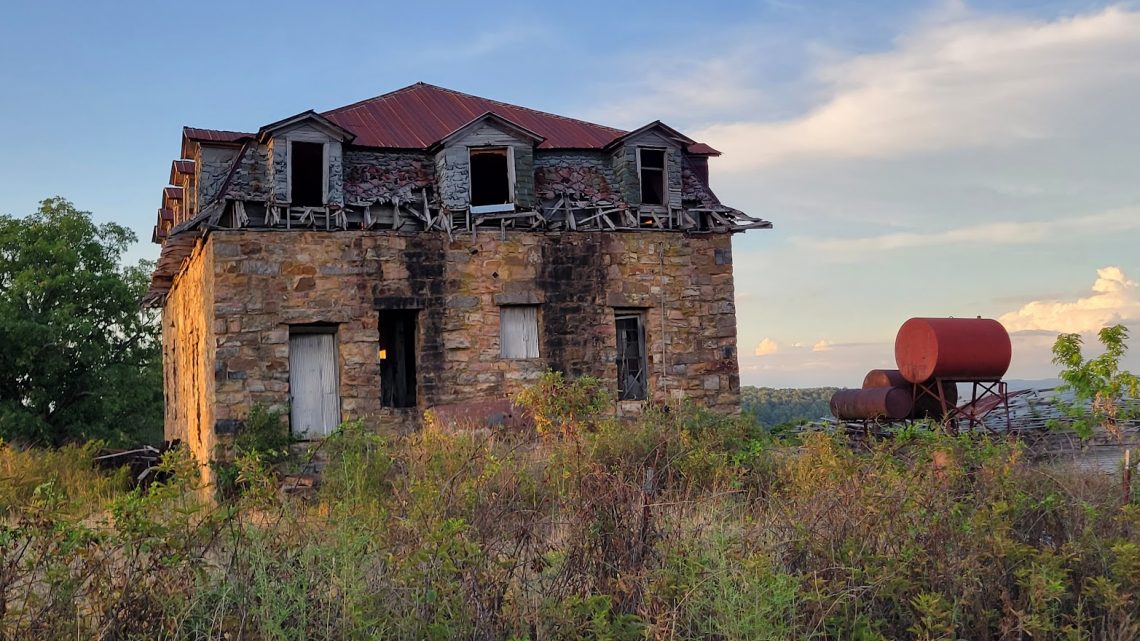 A few weeks ago, we went for a backroads drive with some friends and discovered Mountain Crest Academy. We were hunting elderberries, but the ones we found were so tiny we decided we didn’t want to mess with them. Instead, we just enjoyed the lovely Ozark scenery and the fascinating stories our friends had to tell.

It was the time of evening when the deer were out. We lost track of how many we saw.

As we drove deeper into the backwoods, our friends told us that an old “Girls’ College” was coming up. We had been on dirt roads for at least an hour, and the GPS didn’t indicate any towns or settlements nearby, so I couldn’t imagine what they meant. A one-room schoolhouse, I could visualize, but a college?

Soon enough, we approached it. This large stone building was at the top of a mountain (well, what they call “mountains” around here, anyway) on a dirt road across from a farmhouse. It was in an overgrown field fenced off with barbed “bob” wire. Various pieces of farm equipment were scattered around. If I hadn’t been told differently, I would have assumed it was just a fancy old barn.

That was the “Girls’ College.”

I had to know more.

I was tickled to see that Google has a listing for it. The name is Mountain Crest Academy. (Not “college”?)

Also, it’s “temporarily closed”! That cracks me up. Reckon when they plan to reopen?

That’s all the information on the Google listing, but I did find a few tidbits about it on other websites.

From what I’ve learned, Mountain Crest Academy was a private school for grades 1-12, not a college at all. Also, it was co-educational. I’d be very interested to know how the rumor started that it was a girls’ college.

The academy was one of a large number of schools founded by the Presbyterian Church to serve the “backward classes” of the rural mountain South.

A Presbyterian mission school, Mountaincrest Academy opened its doors in September of 1915. The academy sits atop a plateau at an elevation of 2,362 feet, one of the highest in the Ozark National Forest of the Boston Mountains. This large academy is 35 miles from the Franklin county seat of Ozark.

~The Boston Mountains: Lost in the Ozarks by Velda Brotherton

There were originally two buildings. This one had classrooms on the first floor and the boys’ dormitory on the second floor. The other building was the girls’ dormitory. It was across the road, but it’s no longer there. That makes it especially puzzling why this building is thought of as a “girls’ college” when it wasn’t even the girls’ dorm.

There was a local public school nearby when the academy opened. Probably it only went through eighth grade, as many rural public schools of the time did, so students who wanted more education could attend the academy for high school.

The articles online were very brief. I wondered if I could find out more at the local library. We’re not in the same county, but our closest library (in Mountainburg) is only about 25 miles from the academy, so I thought there was a good chance they would have something on it.

Sure enough, a couple of non-circulating reference books had a little more information:

The Boston Mountains: Lost in the Ozarks

Sometime during the heyday of the academy, the small school in Frazer burned… After the fire, students who had attended school there walked up the steep hill to attend the academy as day students.

Other students lived on campus, the boys in dormitories on the top floor, the girls in a separate dormitory that is no longer standing. While day students paid a tuition of $1.00 per month those in residence paid a rate of $12.50 per month… Classes were taught first through twelfth grade.

The school boasted a kitchen and dining room on the ground floor of the two-story girls’ dormitory, which also had a library and two classrooms. Two upstairs bedrooms were occupied by the girls and a matron who was also the school cook. Mountaincrest always enjoyed an excellent reputation and its proficiency was rated far above the local tax-supported schools.

A brochure dated 1920 states: “Mountaincrest begs to announce her Sixth Annual Term of School. Faculty: Rev. J.E. Jeter, Supt., Mrs. Jeter, Advanced work, Miss Susan Bunce, Primary. School opens Sept. 5. Students will care for their own rooms and give as much as one hour’s work to school each day and three hours on Saturday.

Pupils will not be permitted to visit home oftener than once a month, exception on account of sickness. All students will be required to attend religious service. Tobacco and unsanitary habits are barred from the school.”

The well-educated teachers were very dedicated, as is evidenced by the small salaries of from $30 to $50, which they accepted. It is obvious they were inspired by a religious and missionary enthusiasm. One was a retired teacher from Cornell University; others were equally outstanding in their fields.

Mountaincrest would live on until the end of the spring term, 1931… For some time after that, the auditorium on the first floor played host to community activities, both religious and general.

Former students have only high praise for the school, its instructors and the education they received.

~The Boston Mountains: Lost in the Ozarks by Velda Brotherton

An obscure minister named John Ernest Jeter pioneered the Southern Presbyterians’ mountain mission work in Arkansas. A former student at Chicago’s Moody Bible Institute, Jeter founded Mountain Crest Academy on a rugged ridge of the Boston Mountains along the Madison/Franklin county line in 1917, one year after he and his wife, Callie, established a mission church in the community. Though today Mountain Crest ranks as perhaps the most remote location of all Arkansas’s mountain mission schools, at the time of its founding it was only six miles from the nearest depot… In 1918, the Woman’s Synodical of the Southern Presbyterians’ Synod of Arkansas adopted the academy and began raising funds for its operation and expansion.

As is the case with most mountain mission schools in Arkansas, little documentary evidence survives to provide insight into Mountain Crest Academy’s curriculum and day-to-day operations. From the few denominational records that reference the school, it is apparent that by 1922 the school consisted of a three-story girls’ dormitory, a $9000 native-stone academic building containing an upstairs boys’ dormitory, and the principal’s residence. The Woman’s Synodical provided provided the bulk of the funds necessary for the buildings and surrounding farmland, which grew to 240 acres in the mid-1920s. By mid-decade, the student body, consisting of grade school children through high school boarders, took classes in a range of subjects from music and Bible to domestic science and standard academic subjects under a faculty of two men and three women. Boarding students paid $10.00 to $15.00 per month, all or part of which could be worked off in the dormitory (for girls) and on the farm (for boys)…

In 1925, the founders of Mountain Crest, John E. and Callie Jeter, left the school and were replaced by the Reverend and Mrs. Holly Hunter Patrick… Upon their arrival at Mountain Crest, the Patricks inaugurated a program that had become standard practice at many settlement schools, the production of handicrafts by students. The handicraft of choice at Mountain Crest was the handweaving of rungs by female students. (Boys continued to devote their labors to the school farm, on which Reverend Patrick installed an experimental apple orchard to go along with existing agricultural activities.)

I still have more questions! How many students were there? Why did the families send them away to boarding school? Also, besides tobacco, I wonder what “unsanitary habits” they meant to prohibit? What do you think?

I need to know (or make up) these things if I’m going to write a novel about it. Which I’m probably not, but you never know. If I find more information, I’ll update this post.

Other Adventures We’ve Had in Arkansas