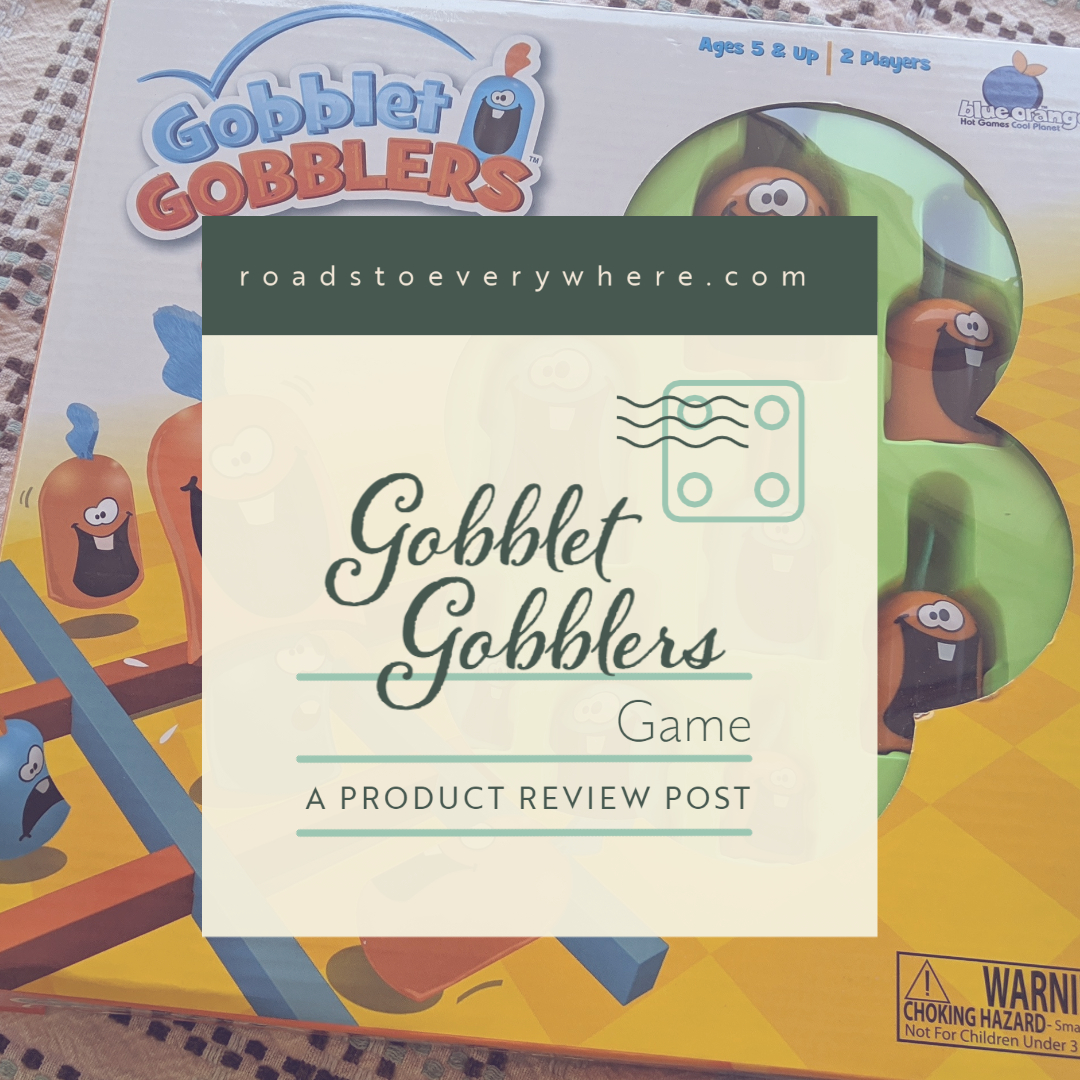 Gobblet Gobblers is a fun, and more challenging, spin on the classic tic-tac-toe game. It’s a unique two-player game from Timberdoodle. I received it in exchange for my review.

What usually happens in tic-tac-toe, especially if the players have similar skill levels, is that “the cat gets it.” How many games of tic-tac-toe can you play without getting tired of the stupid cat getting it every single time? That doesn’t happen with Gobblet Gobblers.

The game style is very whimsical with thimble-shaped playing pieces in orange and blue. (Oddly enough, it’s manufactured by Blue Orange Games. And no, this isn’t the only game they make. I’m pretty sure they’re not all actually blue and orange, but this one happens to be.)

Each piece has a goofy one-tooth grin and a little felt “feather” sticking out on top. The feathers make me think they are supposed to be turkeys maybe–hence, “Gobblers”–but the faces don’t look like turkeys. I dunno.

The pieces are nestled nicely in a tray that slides out of the outer box. I’m not a huge fan of game boxes with cellophane windows and the tray itself is pretty flimsy, but I do like that the pieces all have a place to “live.”

There are 3 sizes of playing pieces. The medium size ones can cover the smaller ones, and the large ones the medium ones, much like Russian nesting dolls. And that’s where the added challenge to the game comes in.

You start off playing just like standard tic-tac-toe. You can play any size piece whenever you like. We tried to figure out if there was an advantage to starting with a larger or smaller piece but we couldn’t decide.

On your turn you can add a piece to an empty space on the grid or you can move one of your pieces that’s already in play to cover one of your opponent’s pieces. Part of the strategy is remembering which pieces have other pieces under them.

When the grid is full and it appears that “the cat got it” after all, look again.

If he’s thinking ahead he’ll figure that out and consider other options. Like moving the large piece from the lower right corner and covering the medium orange piece in the center right–and getting 3 in a row horizontally. Ta-da!

Gobblet Gobblers is recommended for ages 5 and up. I can’t imagine 2 adults playing it together–though they totally could–but it’s one that an adult could truly enjoy playing with a child.

Find this and other crazy-smart games and materials at timberdoodle.com.