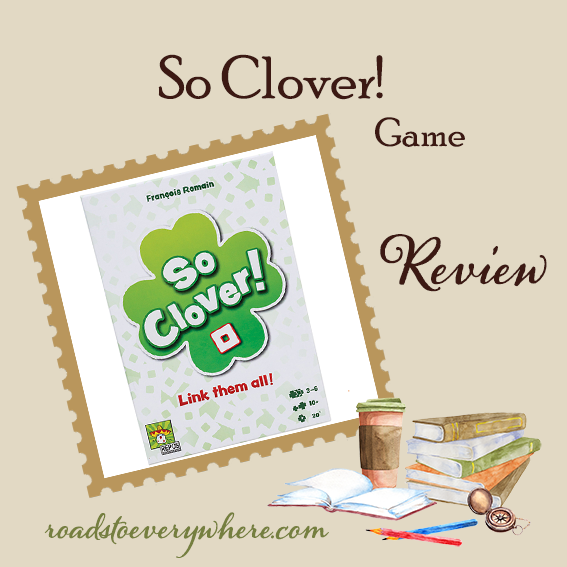 Today I’m reviewing a fun family game called So Clover. It gets thumbs-up all around from my crew!

Disclosure: I received a complimentary game for review from Timberdoodle. All views expressed are my own.

So Clover is a cooperative word-association game for 3 to 6 players. Being a cooperative game it’s non-competitive which doesn’t sound like it would be much fun. I love word games so I was pretty sure I would like this game but I wasn’t sure how well it would go over with my family.

There are six clover-shaped plastic boards designed to hold four word cards and six dry-erase markers to write on the game boards. The 220 keyword cards are square with a cut-out in the middle to fit onto the boards. The other item is a “Record of Legends” card to record the score of each game.

Each player takes a clover board and then draws 4 word cards. Players place their word cards on their boards without looking at them. Once everyone is ready, all the players look at their own boards and privately try to make word associations that connect the two random words on each side of the board.

For example: Lyle came up with “green” to connect “cabbage” and “vegetable,” “move” to connect “dance” and “stroke,” “polish” to connect “foam” and “clean,” and “round” to connect “story” and “crown.” (Those mostly made sense to me, except I didn’t get the “round” one. I suspect he couldn’t come up with a word to connect both words so just went with one of them. We found out that does happen.)

Once everyone has written four words on their boards all players remove the word cards from their boards. Then everyone draws a fifth card to mix in with the four they just played.

Then it’s time to try to figure out what everyone else played. The first player is the Spectator. He puts his board and his five cards in the middle of the table. Then he sits back and silently watches while everyone else works together to deduce how his cards were placed. This involves much discussion and debate. Once everyone has agreed to the placement the Spectator verifies whether or not the placement is how he had it.

If everything is correct, yay! Six points! If any of the cards are wrong, the Spectator takes off the wrong cards, and the rest of the players get another chance. On the second attempt, the score is the number of correct cards, one to four. Then the score is written on the Spectator’s clover board, and the next player becomes the Spectator.

After all the boards are guessed the scores are all totaled up and written on the Record of Legends card. The idea is to see if you can beat your score the next time.

As expected, I really enjoyed this game. I was surprised at how well my family liked it. The kids said it was a little like Apples to Apples in that you have to think outside the box to make connections.

We also thought it was interesting how we could figure out word placement based on what we knew about each player. “He would think this way…” or, “No, she wouldn’t make that connection.” That’s what makes it a particularly great game for families.

So Clover is recommended for ages 10 and up. That’s probably pretty accurate because of the spelling and vocabulary needed.

We enjoyed playing So Clover on Thanksgiving and I’m sure it will be pulled out for family game play on many holidays and game nights to come.