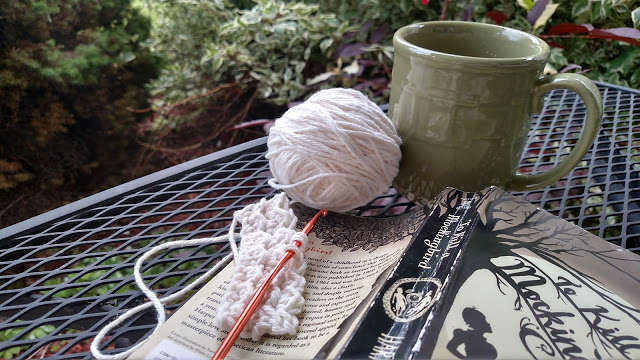 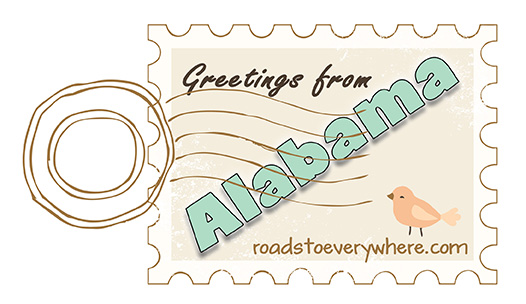 The fifth day of our virtual road trip takes us east from Arkansas to Alabama.

I know I’ve been through Alabama traveling from Arkansas to Louisiana, but I really have no specific memories related to Alabama. However, my dad’s dad was born in Alabama. For today’s stop on our virtual road trip, I decided to share a post I wrote last year.

Those of you who are into literature are probably aware of the hubbub and controversy about the release of the sequel to Harper Lee’s To Kill a Mockingbird. I blogged about it a little bit a few weeks ago. It was a rambling post in which I mentioned:

As it happens, my dad’s people were from the Monroeville area couple of generations back. I don’t know a lot about them, but I have the sense they would have been more like the Ewell family in the book, rather than the Finches. (Now that I type that out, it is kind of eerie that my family name is Ezell which is just one letter different than Ewell. Kinda makes you wonder!)

Obviously, that was just wild, off-the-cuff speculation on my part… but one of my blog readers knew something I didn’t, and referred me to another blog post from last summer. According to Allen Porter Mendenhall, the characters in To Kill a Mockingbird were based on real people. And guess what?

Well, let me just share an excerpt from the article:

Ezell, like Ewell, was, in Papa’s words, “poor white trash.” He was an alcoholic who never worked. He and his family lived outside of town and were supported by Mrs. Ezell, who ironed, washed clothes, and undertook other odds-and-ends to make a living. Ezell’s family lived in a house that someone else abandoned, and the Ezell children started school each year but always dropped out within three weeks on account of the other children laughing at them. The Ezell children never had proper clothes. Papa claimed that their family lived in that once-abandoned house until about the year he left for college. Then they disappeared, and nobody in Monroeville, at least to Papa’s knowledge, knew where they went.

Oh, yes. That’s who I want to be related to. Wouldn’t you?

The thing is… I have a sneaking suspicious that I very well could be. Related to them, that is.

Great-Grandpa Ezell was born in Monroe County, Alabama in 1864. I found his family in census records in that area through 1940. His youngest son, my PaPa (Dad’s dad), had married and moved to Louisiana by 1940. Great-grandpa died in Florida in 1949. Some of PaPa’s siblings also ended up in Florida. So… if they were the Ezell family mentioned in the article, they would have “disappeared” from Monroeville in the 1940s. Allen Mendenhall doesn’t mention first names or dates, so I really have no idea if that’s a possible connection or not.

I’ve asked around a little bit, and no one ever heard of Great-Grandpa being an alcoholic, but of course, that’s not exactly anything to brag about. According to the census records, as well as what I’ve been told, PaPa and his siblings did not graduate from high school which would fit with the story above. Dad says PaPa was smart as a whip, though, and could do mental math like nobody’s business.

I have never heard how my grandparents met or the story of when and how PaPa ended up in Louisiana. All I know is that he definitely rose above his circumstances and went on to make something of himself. Whether or not he belonged to the family that Harper Lee based the Ewells on, it is my understanding that he did come from a very poor, underprivileged family.

My grandparents were “just plain folks,” but they were clean, hard-working, church-going people. Their children were educated and went on to become respected leaders in their various communities.

We may have started off like the Ewells… but happily enough we did go on to become more like the Finches in the end.

O Lord, You are the portion of my inheritance and my cup;
You maintain my lot.
The lines have fallen to me in pleasant places;
Yes, I have a good inheritance.
Psalm 16:5-6

Have you been to Alabama? If so, please share a memory in the comments! That will make this series even more fun!