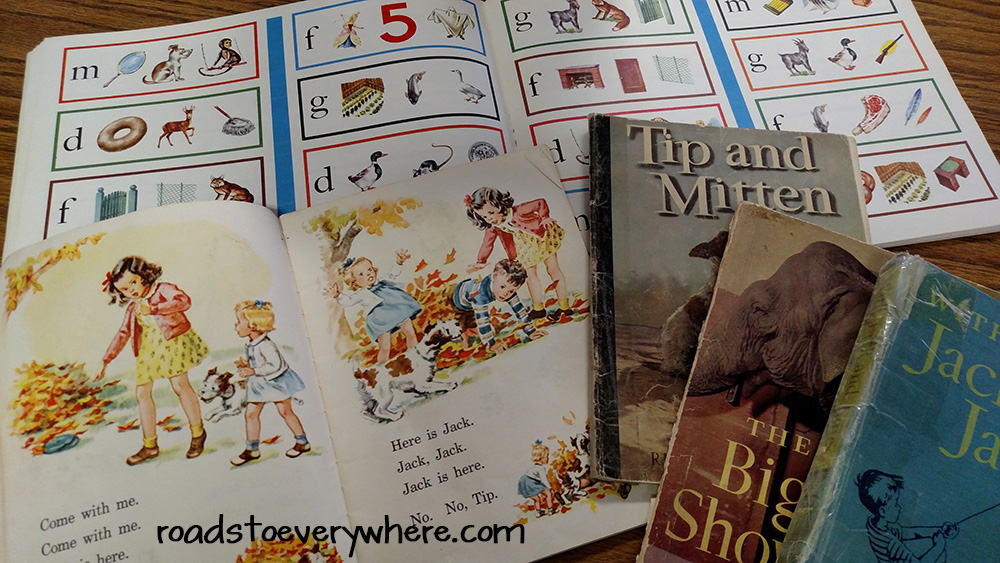 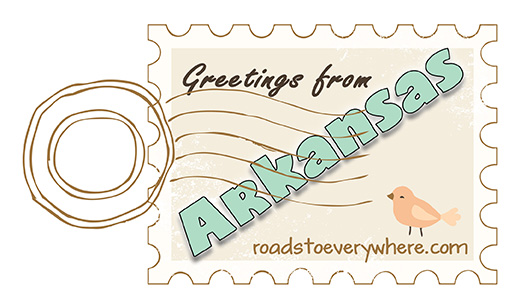 Day 4 of our virtual road trip takes us east from Oklahoma to Arkansas.

We moved so many times over the years that no one place really seems like “home” to me unless it would be Grandmother and Granddaddy’s home place in the Ozarks. They lived there as early as I can remember, and when they finally sold it in their retirement years, it was to my parents. 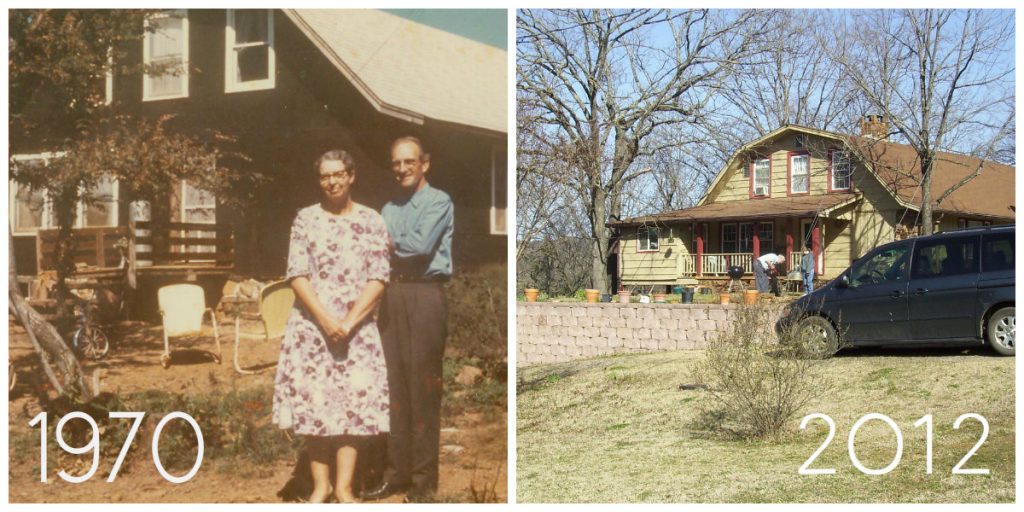 Even though I don’t necessarily consider myself to be from Arkansas, that’s the place that seems like home to me. I have so many memories of being there and it’s hard to put them in any kind of chronological order. Some things happened while we lived there when I was in first and second grade, some when we visited there after we had moved away.

My grandparents had 10 children, of whom my mother is third. Some of Mother’s siblings were teenagers when I was a child and, of course, still lived at home. My youngest aunt, Rachel, is only a few months older than I am.

(Side note: Rachel happens to be participating in the Write 31 Days project also. You can read her series on An Oasis at Home at racheleasleygoing.com.)

We moved into a small mobile home just down the road from Granddaddy and Grandmother, on their property, in the fall of 1972. Dad was between pastorates. I was six. My first introduction to the Little House on the Prairie books was while we lived in that trailer. Mother checked the books out from the library and read them to us, a chapter a night. Oh, they were such good stories. One chapter at a time was not nearly enough. If only I knew how to read myself.

I started school that year. I rode the school bus with Aunt Rachel, Uncle David, and Aunt Esther, all of whom went to Mountainburg School. It didn’t have a kindergarten at that time and besides, I was almost 7, so I started in first grade.

My class didn’t learn to read the first day of school, much to my disappointment. Instead we were supposed to learn to write our names and color a picture of a squirrel. I had been writing my name for years and I knew how to color perfectly well. I thought we were supposed to work hard and learn things at school. This was just way too easy. But it was fun.

Later that week we started with a pre-reading workbook with interesting, colorful pictures–but the work was oh-so-boring. I was told we had to finish those workbooks before we could learn to read actual stories. I thought we would never get through with them. Needless to say, I was in the first group to finish the workbooks and start on our first primer reader: Tip. Finally, a real story. The phonics rules made sense to me, and with that code in mind I could read practically anything.

By the end of first grade I was ready for chapter books. Mother was so good to take us to the library frequently. Much to my satisfaction, I could read the Little House on the Prairie books all by myself– and read the entire series the summer between first grade and second grade. I’ve been a voracious reader ever since.

Livestock at Granddaddy’s house usually included several goats, a flock of chickens, and a dog or two. In the early years there was also old Red, the cow, and a couple of horses and for awhile Uncle Paul and Uncle David raised meat rabbits.  The uncles always had chores to do morning and evening. In my mind “chores” meant taking care of livestock. I don’t think heard the word used for other kinds of daily work until years later. Sometimes I got to help with the chores. I could scoop out feed and gather the eggs, but I never learned to milk. I did try it. It was harder than it looked, and there were always boys around to do the milking, so I didn’t have to learn.

Grandmother was well-known in the family for the little jobs she had for everybody to do. Apparently, tending to livestock was “chores” and everything else was “a little job.” In the winter there was always firewood to be carried in. In the summer there were rocks to be picked up out of the garden, and a wide variety of garden jobs: hoeing, pulling weeds, picking beans, snapping green beans or shelling pinto beans.

For awhile Grandmother had a wringer washing machine. It was out in the yard one summer. It was fun to use to wash the clothes, but you had to be very careful pushing them through the wringer. Then, of course, we hung the clothes on the clothesline to dry. Remember, this was in the 1970s, so this was pretty unusual for that time period, although maybe not for that place.

We had no air conditioning and summers in Arkansas are hot and muggy. The house would not be any cooler than outdoors. If you were outdoors you might catch a breeze, so we lived outside much more than we do now. We would gather under a shade tree to shell beans or whatever other job could be done sitting down.

There was always plenty of work to be done, but we children had lots of time to play, too. We mixed water with the red clay dirt and made mud pies and sculptures. We romped through the pastures and played in the creek. To get into the pasture, though, required crossing an electric fence, put up to keep the goats in. One kid had to get brave enough to quickly touch the fence to see if it was on. If it was, we knew we had to carefully shimmy under it without touching it, or maybe go down to the barn and go in through the gate.

We ran barefooted all summer long, except when we went somewhere. It was just more convenient, I guess. I never thought anything about it until I grew up and found out that Lyle had never gone barefooted.

Snakes were always a big issue on the Arkansas farm. You see, Aunt Donnie (Mother’s older sister) had been bitten by a rattlesnake when she was just a little girl, 8 years old. The doctor could lay a fifty cent piece between the fang marks on her leg. She nearly died from it, but since she did survive, and the story had a happy ending, we begged to hear about it often. In the telling and retelling of it, you might say we were also being brainwashed to hate snakes. I think some of the kids, the boys especially, may have gotten off with a simple “healthy respect” for the reptiles, but I for one, loathe and despise and fear the nasty things.

On the Arkansas farm rattlesnakes weren’t so much the issue as they had been for the previous generation in southwestern Oklahoma, but we were made to understand that copperheads and water moccasins were just as bad and any snake ought to be strictly avoided, if not killed. Any time a snake was spotted we would run for the adults, and great drama would ensue. One of the adults would scramble for a hoe or other likely weapon and hurry to the location of the snake’s most recent appearance with all the children trailing along behind to watch the spectacle. Usually the snake would be long gone, but occasionally it would be found and summarily executed to the great satisfaction of all.

One of the “little jobs” we hated most was having to pick up rocks out of the garden. That Arkansas red clay was just full of rocks, and every year when Granddaddy plowed up the garden more rocks would come to the surface. He and the uncles would round up any available kids to lug those stupid ol’ rocks over to the tractor. They tried to encourage us along by telling us how big our muscles were getting by working so hard. One summer Uncle Keith promised us the treat of a ride on the tractor when we were done. We thought that sounded fun, so you can imagine our great disappointment when the ride turned out to be only about a quarter mile down the road. 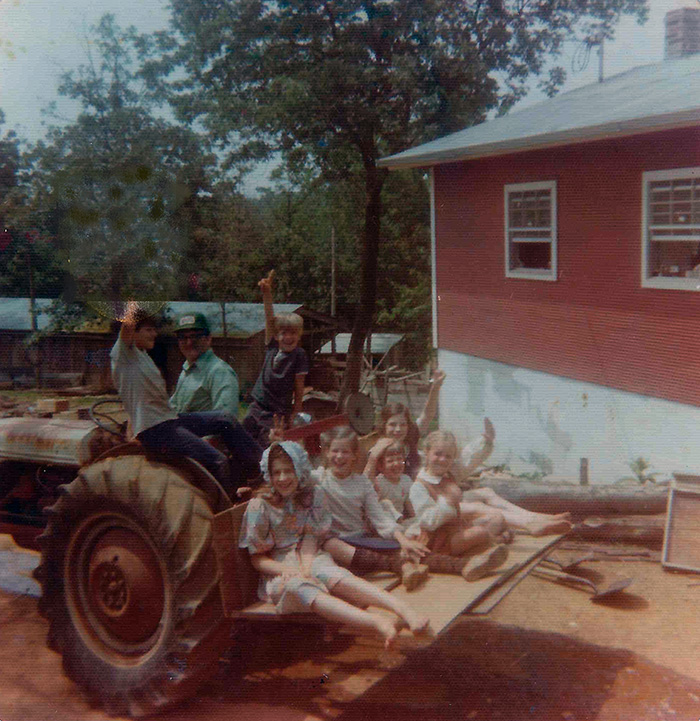 My mother took a picture as we happily set off, not knowing what a let-down it would be. I’m modeling a sunbonnet because that was the era of the Little House on the Prairie TV show and many girls our age had sunbonnets. (Not that we watched TV. We didn’t. I just knew about the series and loved the books.) I guess I thought picking up rocks was pioneer work and I needed to protect my “fair complexion” from the harsh rays of the sun. Or maybe I was just channeling my inner Laura Ingalls running barefoot like that. I don’t know. If I were truly being Laura Ingalls wouldn’t that sunbonnet be hanging by the strings behind my neck?

What I can’t figure out is where Rachel was when it came time to take the picture. Being the youngest aunt she was often lumped in with the grandchildren, and I was pretty sure she helped pick up rocks that day. So I called and asked her. Oh, yes. She definitely remembers the lame tractor ride. She said she was probably hiding from the camera because she hated having her picture taken.

Quite a few years later some of us were bitterly complaining about that poor reward during a storytelling time at a family reunion. Uncle Keith protested. “I did the best I could!” he claimed. “That old tractor wouldn’t go any further. I got to the bottom of the hill and that’s as far as it would go.”

The thing that amazed us most was the reaction of some of our younger cousins who were either babies or not yet born. “We never got to do anything fun like picking up rocks on the farm!”

I do feel sorry for them, don’t you?

Have you been to Arkansas? If so, please share a memory in the comments! That will make this series even more fun!