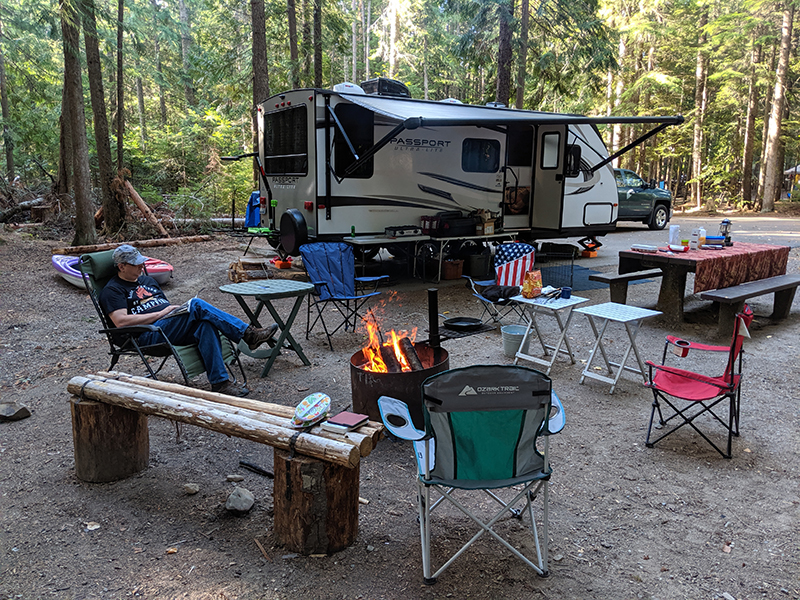 September whooshed by so fast around here! Did it for you, too? It wasn’t quite so busy as the summer months but we still managed to pack a good bit in.

We had a lovely, relaxing camping trip to Priest Lake over Labor Day weekend.

The weather was perfect and the scenery was spectacular.

As an added bonus we were supposed to be able to see the Northern Lights on Saturday night that weekend. The skies were clear and Lyle had scoped out a break in the trees with a view of the northern sky. About 10:00 p.m. we drove up the mountain hoping to enjoy the show.

The aurora borealis was indeed on display, but all we could see was a flickering very similar to lightning off behind the mountains. We did, however, see several shooting stars.

Rebecca and I spent a couple of Saturdays pretending to be pioneer women. We put up several jars of plum butter, plum jelly, and pear butter. Rebecca also made a double batch of pico de gallo. I’m hoping to make applesauce this weekend. And maybe some pumpkin butter a little later on. Is that even a thing?

One morning I had a few minutes to spare before a business luncheon so I explored a little local bookshop, The Well Read Moose. I refrained from buying books but I did buy a fountain pen just for fun. I’ve never had a fountain pen before. Have you?

Lyle invited me on an ATV ride to the top of Marble Mountain one weekend. It involved a little hiking and low-key rock climbing when we got to the top, but the view was spectacular.

I’ve been enjoying being on the leadership team with Post Falls Women in Business this year. We had a fundraiser for the library’s new teen room and presented them with a giant check for a photo op. (Of course we also gave them a real check that they could deposit.) I love supporting the library!

We had planned to go camping again last weekend. Lyle built these snazzy kayak racks for the pickup in order to be able to carry them along with the ATV.

Yes. Indeed that is snow. In September.

It doesn’t look like much but it was very windy and snowed most of the day Saturday and for a good while Sunday morning. We hadn’t even had a frost yet so it didn’t stick in our yard, but it did start to accumulate on the mountain.

I’m not ready for this.