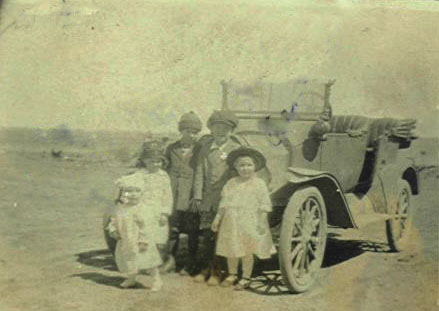 My “Granddaddy” Gordon Easley was born in 1915. He had a sharp memory and was a great storyteller. About 30 years ago I sat down with him and turned on a little tape recorder. With just the slightest prompts from me he would launch into his experiences of long ago. Over several sessions we managed to fill several cassettes. He told me this story in June 1989 when I was 23 and he was 73. (I’m somewhat older than that now, and Granddaddy has been in heaven more than 12 years.)

In the early days of automobile travel there were no pavements. Really not even gravel roads. Everything was just a rough road bed through the country, meandering from one farm house diagonally across to another. The road would wind its way back and forth in the general direction of the next town.

There were no road markers directing traffic. You just had to know that your destination was south of you or west of you. And you headed that way.

You’d stop along and inquire, “Does this road go to this certain place I’m trying to get to?”

And some would say, “No. You’re on the wrong road. You go…” and they would direct you in the proper direction.

The first road trip I remember was in July 1918. I was not quite 3 years old.

We went down to Comanche County, Texas to visit my mother’s parents. As we went down on vacation that summer, somewhere the old car got stuck in the loose sand on the road. I don’t know if it was pulling down or actually got stuck, but it broke the main drive shaft.

I guess Dad patched it up to get home. I don’t remember how they got it home. Maybe I went to sleep.

In the early part of 1920 Dad bought a new Dodge car. The Dodge dealer had driven it as a demonstrator and sold it at a discount. It had 1000 miles on it.

It was a touring car. It was open around the sides and the top would fold back. In case of rain there were side curtains, one above each door, and a panel between the doors. It was not completely dry in a big stormy rain, but it was better than nothing.

In those days cars were only driven for special occasions. Top speed was 15 or 20 miles per hour on the rough country roads.

Dad owned that car for 12 years and in that length of time did not put much over 50,000 miles on it.

In the summer of 1923 we made a trip [from our home near Eldorado, Oklahoma] to see my mother’s brother out in Brownfield, Texas, a distance of about 200 miles.

We left in the dark part of the morning, before daylight. We drove all day long.

At sundown Dad took out at Lubbock and bought a hotel room. We spent the night in the hotel and got up the next morning and drove on till about the middle of the afternoon to get to Brownfield.

Part of the time we were having to push that car to help it through the loose sand beds in the road.

Well, right now you can go through the same cities, the same distance, in our automobiles in 3-and-a-half uours on 4-lane paved highways right where we used to go through the sand beds, pushing the old car a lot of times.

There have been a lot of improvements in the past sixty-some years.

A note to my family members who probably noticed: The vintage car photos in this post are actually of Grandmother as a little girl (along with her brother and cousins). The pictures are unrelated to the story other than they are about the same time period. I don’t seem to have photos of Granddaddy with cars from this era.