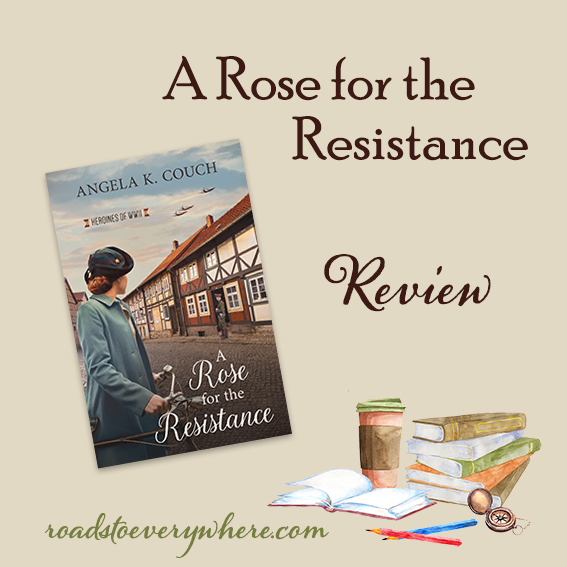 Today I’m sharing a book review for A Rose for the Resistance, a Christian historical romance novel by Angela K. Couch. It is part of the Heroines of WWII series published by Barbour but can definitely be read as a stand alone novel.

It’s hard for me to comprehend the courage and strength required of those involved in the French Resistance movement during World War II. During a time like that how could one know what was right and worth the risk of opposing those in power? Wouldn’t it be easier to just go with the flow? To go along to get along?

A Rose for the Resistance explores those questions in a compelling story about a young woman who reluctantly finds herself taking such risks for the sake of freedom and those she loved. It is also the story a Nazi soldier who gradually comes to realize that the principles he was trained to stand for are the not principles he can live with.

With her father in a German POW camp and her home in Ste Mere Eglise, France, under Nazi occupation, Rosalie Barrieau will do anything to keep her younger brother safe. . .even from his desire to join the French resistance. Until she falls into the debt of a German solder—one who delivers a wounded British pilot to her door. Though not sure what to make of her German ally, Rosalie is thrust deep into the heart of the local underground. As tensions build toward the allied invasion of Normandy, she must decide how much she is willing to risk for freedom.

To keep from freezing in the great white north, Angela K. Couch cuddles under quilts with her laptop. Winning short story contests, being a semi-finalist in ACFW’s Genesis Contest, and a finalist in the 2016 International Digital Awards also helped warm her up. As a passionate believer in Christ, her faith permeates the stories she tells. Her martial arts training, experience with horses, and appreciation for good romance sneak in as well. When not writing, she stays fit (and toasty warm) by chasing after five munchkins.