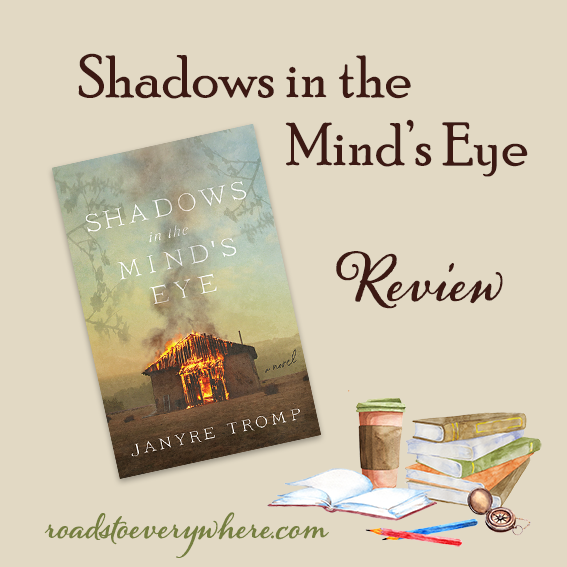 Disclosure: I received a complimentary copy from the publisher as part of Read with Audra blog tours. This post includes Amazon affiliate links.

Shadows in the Mind’s Eye tells the story of a sailor, Sam, who returns home to his young wife, Charlotte, and their little girl after World War II. It is set on the family farm in the Ouachita Mountains just south of where I live, which made it especially interesting to me. It was an intriguing plot with several unexpected twists. Working through PTSD while also observing sinister criminal activity would be enough to make anyone doubt his sanity. I especially appreciated Charlotte’s loyalty to Sam throughout the story, even when she didn’t understand what was going on. It’s an inspiring story of faith and family.

Charlotte Anne Mattas longs to turn back the clock. Before her husband, Sam, went to serve his country in the war, he was the man everyone could rely on—responsible, intelligent, and loving. But the person who’s come back to their family farm is very different from the protector Annie remembers. Sam’s experience in the Pacific theater has left him broken in ways no one can understand—but that everyone is learning to fear.

Tongues start wagging after Sam nearly kills his own brother. Now when he claims to have seen men on the mountain when no one else has seen them, Annie isn’t the only one questioning his sanity and her safety. If there were criminals haunting the hills, there should be evidence beyond his claims. Is he really seeing what he says, or is his war-tortured mind conjuring ghosts?

Annie desperately wants to believe her husband. But between his irrational choices and his nightmares leaking into the daytime, she’s terrified he’s going mad. Can she trust God to heal Sam’s mental wounds—or will sticking by him mean keeping her marriage at the cost of her own life?

Janyre Tromp (pronounced Jan-ear) is a historical suspense novelist who loves spinning tales that, at their core, hunt for beauty, even when it isn’t pretty. She’s the author of Shadows in the Mind’s Eye and coauthor of It’s a Wonderful Christmas.

A firm believer in the power of an entertaining story, Tromp is also a book editor and published children’s book author. She lives in Grand Rapids, Michigan with her husband, two kids, two crazy cats, and a slightly eccentric Shetland Sheepdog.