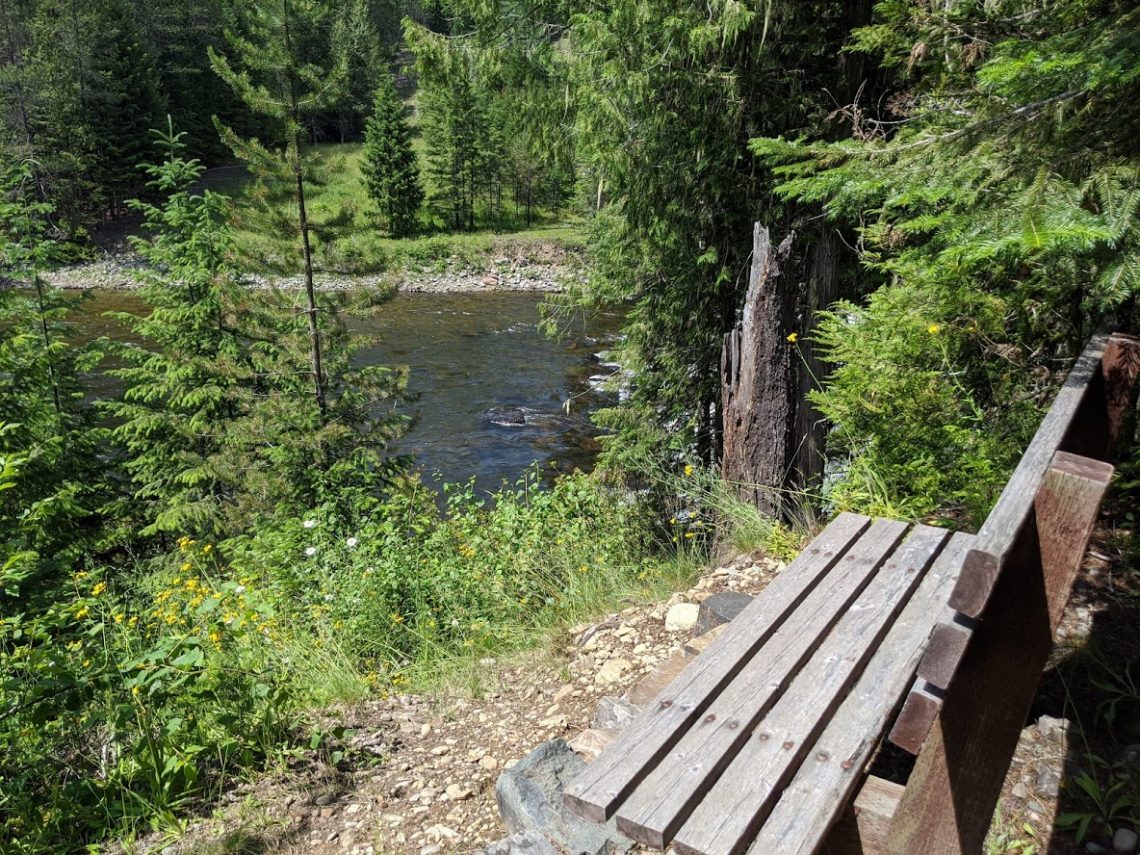 Such good intentions I have! My follow-through is not always all that good, but oh, my intentions are!

I had intended to keep you posted on our adventures each month this summer, but did that happen? Not exactly. I shared an overview of each month in April, May, and June but I kinda dropped the ball during the summer.

My good intentions oughta count for something, ought’n they? No? *sigh* Okay, then, let me get you caught up and then we’ll see what will happen this fall. I still have good intentions, but no promises.

Over 4th of July weekend we went camping on the Moyie River outside of Bonners Ferry, Idaho. We had a prime campsite on a bluff right on the river. A little hiking trail meandered along between our site and the river, so we had the opportunity to greet a number of friendly hikers throughout the weekend.

We got in a few little hikes and ATV rides ourselves. And there was this charming flirting bench situated so picturesquely not too far up the trail.

Another weekend, later in July, we took the ATV “up the river” for a 30-mile ride on forest roads. We were about halfway done with the ride when we realized we had picked up a stick. Sometimes small loose branches get caught in the underside of the ATV, but this time the stick had actually gone straight into the tire.

We didn’t dare pull it out because we were sure a hole that size would cause an immediate flat tire.

Fortunately, Lyle carries a small hacksaw in his supplies kit, so he sawed the stick off even with the treads and we kept going. No point in turning back because we were right about halfway. We prayed the whole time that the tire would hold air long enough to get back to the truck. Otherwise we would have been in for a really long hike. Thankfully, we did make it.

When we got home Lyle pulled the stick out and discovered that it had gone in about 2 or 3 inches. He had the tire repaired and we haven’t had any more issues with it.

The first weekend of August we made a quick weekend trip to Tacoma, Washington, and then came home via Mount Rainier. It had been several years since Rebecca had been that way, so she was thrilled to enjoy the beautiful scenery again.

We love the long summer evenings and made time for several drives to enjoy the sunset during August.

We fit in another camping weekend on the Moyie River before Labor Day. We didn’t have quite as nice a campsite this time. It was interesting to see how far the river had gone down since we were there in July.

We took a vacation the week of Labor Day to take Rebecca to Arkansas to stay with my parents for awhile. They are needing some help and she is very excited for the opportunity to spend some time in the country being a “farm girl.”

There are several routes one can take between Arkansas and Idaho. This time we chose to travel across Oklahoma, the Texas panhandle… (What’s up with the rest areas across there not having restrooms?! So weird! And inconvenient! My goodness!) …and then across New Mexico, turning north at Albuquerque, traveling through a corner of Colorado, then on up through Utah, southern Idaho, into Montana, and then back into the panhandle of Idaho.

We noticed the smoke rolling in from the west the further north we went.

By the time we got home it was almost as if we were fogged in. The crazy thing is, the fires were over 1000 miles away… yet the smoke was worse than it was 2 years ago when we had so many wildfires locally. This time it hung around about a week before clearing out. Two years ago it lasted weeks and weeks. It’s gotten to where late summer wildfire smoke is just “a thing” around here, but this was much worse than usual.

And, ready or not, pumpkin spice season has arrived! Laura brought me this adorable candy corn cookie one day to enjoy with my tea.

During September we’ve helped her move into an apartment with a friend… which means we’re empty nesters now, at least for the time being! We’ve attended a wedding… and we’ve gone camping one more time.

It was just the two of us for the camping trip. Lyle made a delicious skillet meal on the camp stove one evening. Laura and a couple of her friends did come out for s’mores around the campfire later that night, so we weren’t totally alone.

It will be interesting to see what adventures are in store this fall!