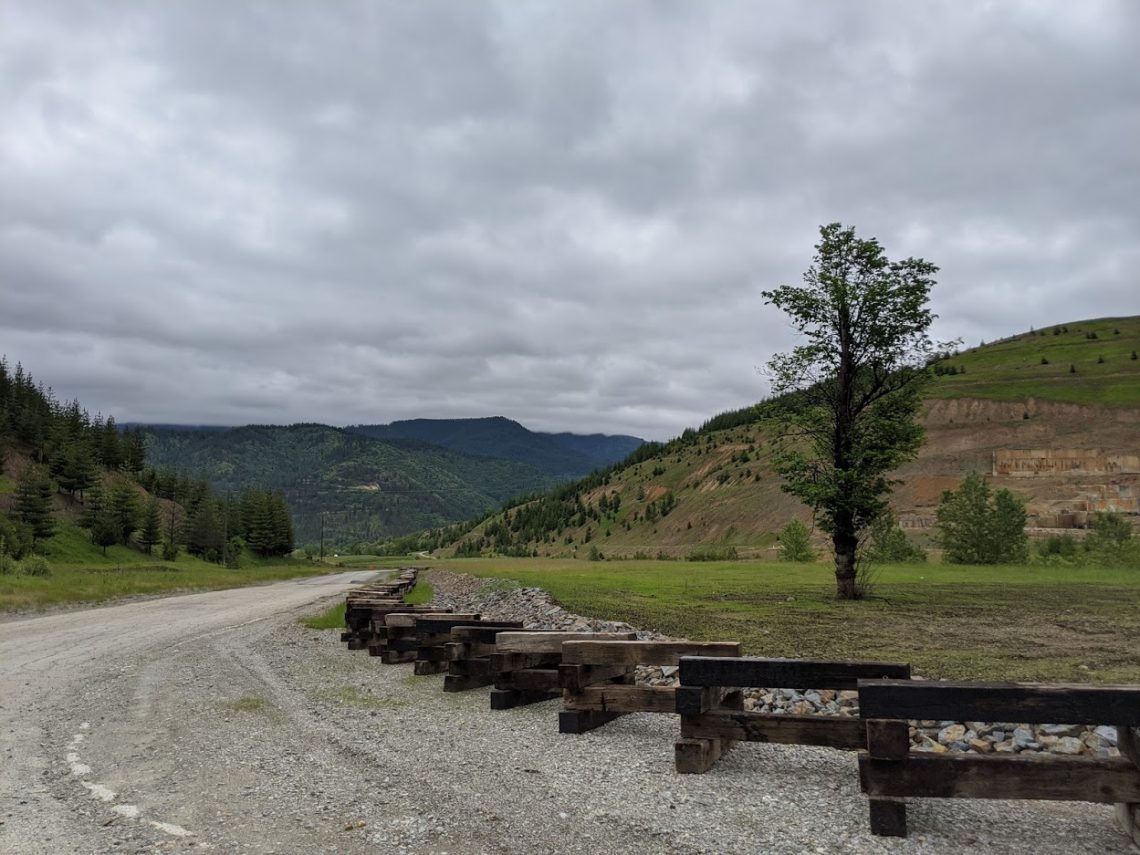 I didn’t mean to leave you hanging with our tour across the Silver Valley!

And now… coming into Pinehurst (a small town to be sure, but not quite so tiny as Cataldo and Kingston) we found…

It is nestled between two ordinary houses. The story is that it was originally built along the river and was used as a sauna (of all things!) for a boarding house. The boarding house was destroyed in a flood in 1933 but the sauna survived. The owners then turned it into a two-room rental cabin. In the late 1970s it was sold, dismantled, moved, and reassembled in this neighborhood in Pinehurst.

On down the street is this historic log church built and organized in 1933. It is now known as Community Bible Church of Pinehurst. I wonder if there’s a bell in the tower.

Let’s see… apparently this was Morbeck Grocery in Pinehurst from 1937 till 1970. Then it became Wilbur’s… and then Crown Electric. The signs on the side now say Almost Anything Handyman Service. I don’t know if that’s the business that occupies the building now, or if they are just advertising on that space.

Watt’s Applicance is kitty-corner across the street from Morbeck Grocery (or whatever it is now). Back in 1937 a man named Lee McClain “opened a grocery store in a 15-foot by 30-foot space with $500 in groceries.”

Just visualize what $500 worth of groceries looks like now. Maybe two shopping carts full? But maybe it was enough to fill his space back then. Lee’s wife, Nettie, ran the Pinehurst Post Office out of the grocery store. She was postmistress for 34 years but the grocery store became an appliance store in the early 1940s, so I don’t know when the Post Office moved.

Was there ever a more obvious name? Though I’m pretty sure the tall pine wasn’t nearly this tall in 1957 when this ice cream stand opened!

Do you see the cedar stumps in the field over yonder? Yeah, me neither. Maybe we just weren’t close enough. Apparently there used to be cedar groves along in through here. The landowners cut them down in the 1890s and early 1900s to sell to mines to fuel their steam engines.

The next little town we come to is Smelterville. Wayside Market was built in 1931 and included a grocery store, a post office with living quarters, and a drug store. It was built by Harry Brown who lost the place during the Great Depression. However, 3 generations of women related to Harry worked in the post office over the years: his sister, niece, wife, sister-in-law, daughter, and granddaughter! The building is currently for sale.

“Before the 1930s this building was a dance hall where families came and children often slept outside on benches piled with coats while parents danced inside. In the late 1930s it was converted to apartments. During WWII many war brides lived here while they waited for their husbands to return.” (From Roads Less Traveled Through the Coeur d’Alenes by Dorothy Dahlgren and Simone Kincaid)

Surely there were more trees, or something, growing close around this log cabin when it was built in 1928. It appears to still be a private residence.

One more site before we head into Kellogg… What we’re looking at here is “remnants of foundations and a concrete flume” that had something to do with mining. I’m not sure what kind of mill is related to silver mining, but it was active in the early 1900s.

In my next installment I’ll take you on a brief tour of Kellogg. That will probably be next week… if I manage to follow through on my good intentions!