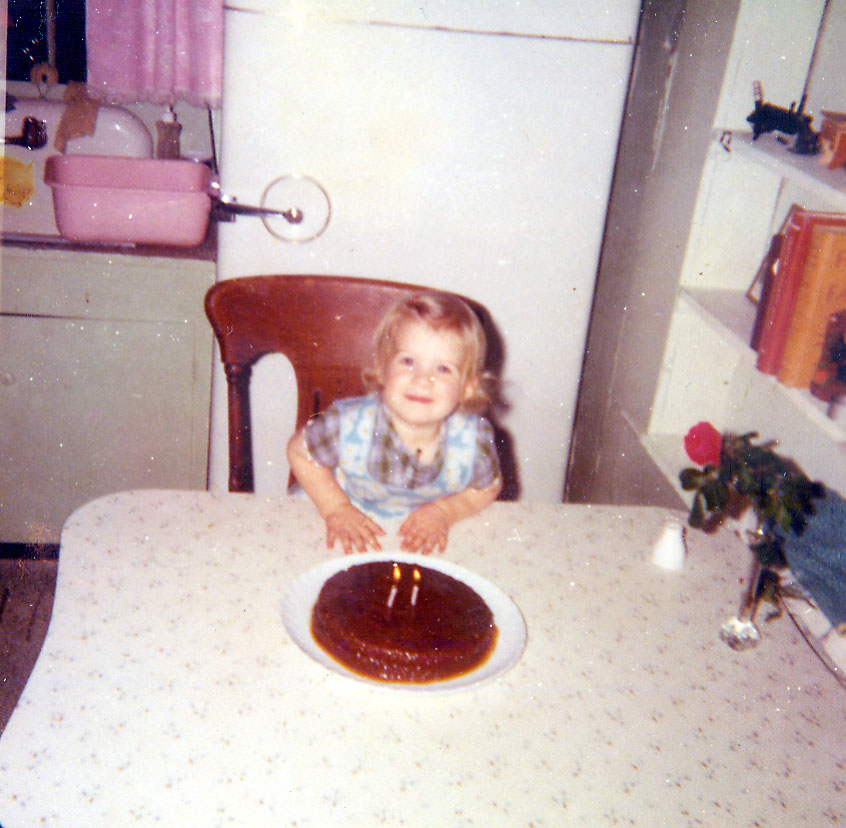 For today’s post I gathered all the pictures we have of my childhood birthday cakes. We always had a birthday cake, but we rarely had a party, and we didn’t have a camera for a lot of years… which is why there aren’t very many pictures.

I am told we had two “parties” for my first birthday. One with a cousin who is 3 weeks younger at MawMaw and PawPaw Ezell’s house in Louisiana… and then one at Grandmother and Granddaddy Easley’s house in Arkansas. I think we were moving between the two places about that time, maybe. 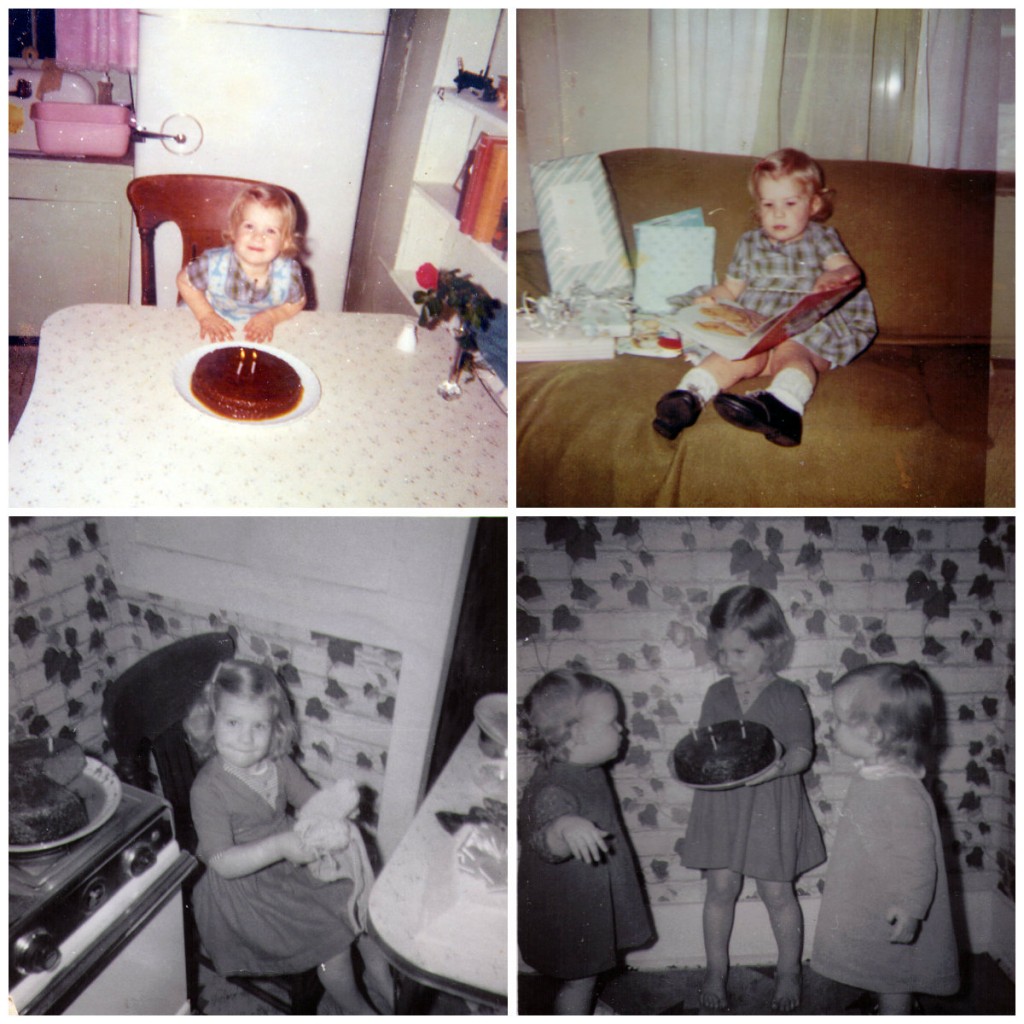 I had the same kind of cake for my 2nd and 3rd birthdays, and I specifically remember having that same kind on my 8th birthday. Probably other years, too, but I remember asking for it on my 8th. From the pictures, you might guess it’s a chocolate cake, but it’s not. It’s a yellow cake with a caramel-y made-from-scratch brown sugar icing that was oh-so-yummy. It’s my Grandmother’s recipe, and yes, I’m going to share it in a minute. 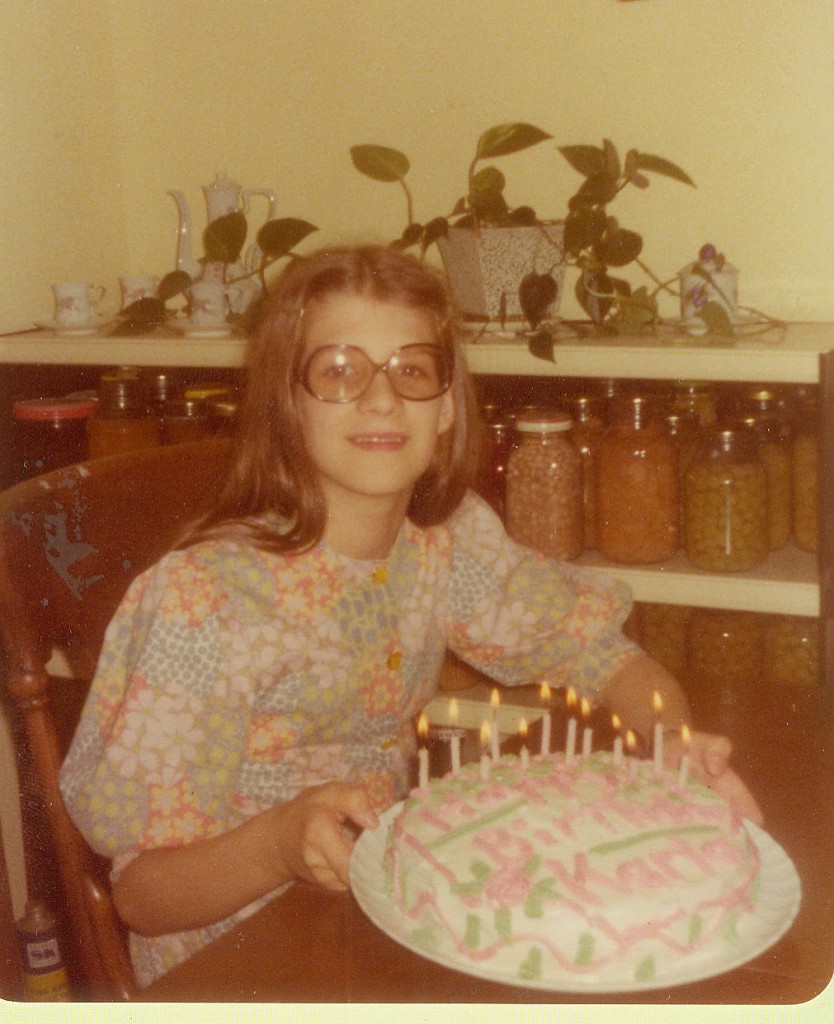 Mother got creative and made a girly cake for my 12th birthday. I thought it was beautiful. There are so many other things about that picture that I enjoy as well.

Not the glasses. You didn’t have to bring that up, did you? I mean, it was 1977, for cryin’ out loud, and those were the style.

I love the rows of home-canned jars behind me. Mother spent weeks every summer preserving food and we didn’t have a pantry or really any storage area at all in that little house, so the canning jars lined shelves in the kitchen. After she finished canning a batch she would line them up and admire them. “Aren’t they pretty?” she would say. I didn’t get it. Jars of fruits and vegetables didn’t seem pretty to me. But they are. I get it now.

Notice the philodendron plant on the top of the shelf behind me in that picture. It’s not just a casual houseplant. Oh, no. Grandmother had sent me a dollar for my 6th birthday (six years previously) and don’t ask me why, but I bought a little “ivy” with my dollar. That was the result half a dozen years later. Pretty cool, huh? But that’s not the end of the story. Seven years later I went away to college and my “ivy” went with me. When I got married I still had it. Fast-forward another 30 years… and that faithful little plant is currently gracing the corner of my bedroom. I came the closest to losing it when we moved from Idaho to Colorado in January 2014. It got too cold during the move and lost every leaf it had. All the vines turned black but I could still see the faintest bit of life in the very center stalk, so I cut it all the way down to just a fraction of an inch of stalk and carefully kept it watered. I was so happy when it started putting out leaves again, and by now it’s as happy as it ever was. Happy 44th birthday, little Ivy.

And now, here’s the recipe I promised you: