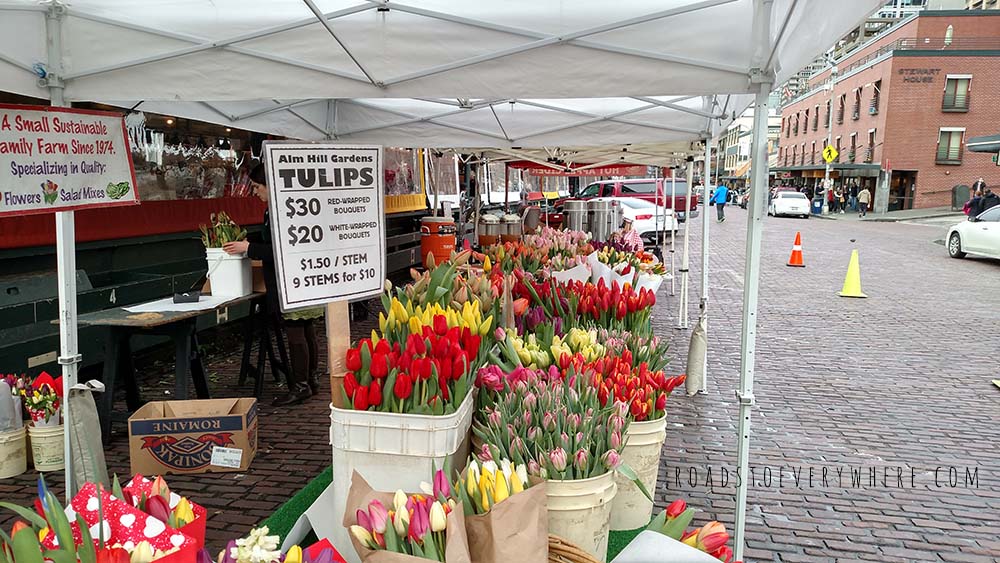 It all started on a whim.

“Hey, why don’t we run over to the Seattle RV show this weekend?” he suggested

To be honest, I wasn’t all that interested in going to the RV show, but I knew the weather in Seattle, gray though it likely was, would be warmer than it is here. And I remembered the spring flowers at Pike Place Market. Maybe they would have some early blooms. I am very ready for spring.

To get the most out of our trip, and since it was the weekend before Valentines Day, we decided to spend the night. We chose a hotel near the airport, close to a light rail station, so we could leave our car there and take the train into the city. After living in Denver, our experience is that is easier than trying to find parking downtown in a big city.

We checked into our hotel about 1:30 and we headed for the train station. We hadn’t eaten lunch yet, but Lyle found there were several places to eat near the train station that was 2 stops beyond where we needed to go. Our plan was to go eat first, then take the train back to the stadium where the RV show was.

It was an easy 3-block walk to the train station near our hotel. We could just take the elevator up and there we would be, ready to catch the train. Except the elevator was out of order. So we unexpectedly had to hike up 4 flights of stairs. I have to admit that was not easy for me. I am way more out of shape than I ought to be. But we made it and caught the train going into the city. So far, so good.

Turns out the restaurant where we had planned to eat was closed, but we easily found another one. As we were eating, Lyle was checking Google maps again. 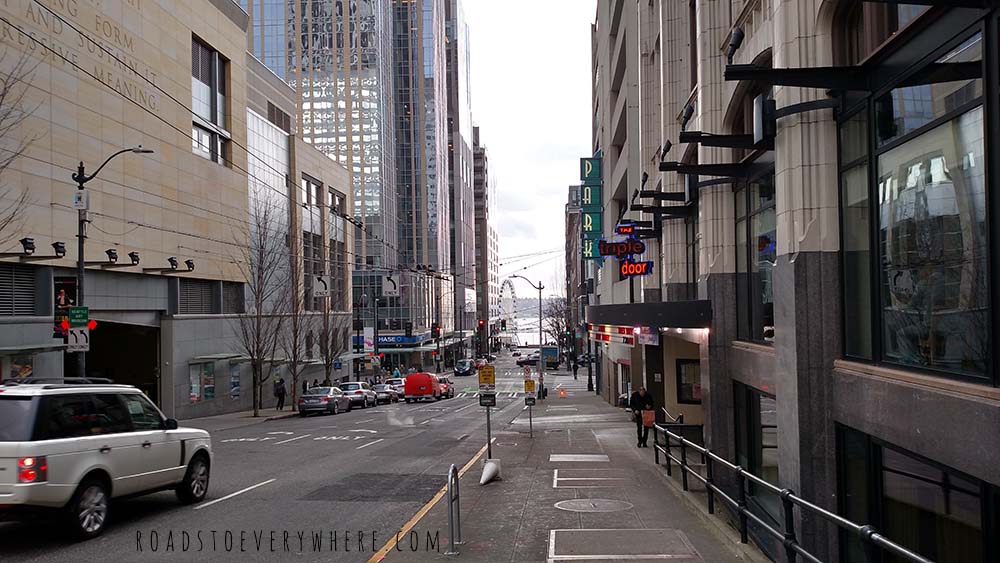 “We could catch the train where we got off and ride it back to the stadium like we talked about. Or we could walk. If we turned at the corner, we could go down to the waterfront and walk along there to the stadium,” he suggested.

“Yes, I like that idea,” I readily agreed. It was a pleasant afternoon in the low 50s, which felt quite balmy, and the Seattle waterfront is always interesting. 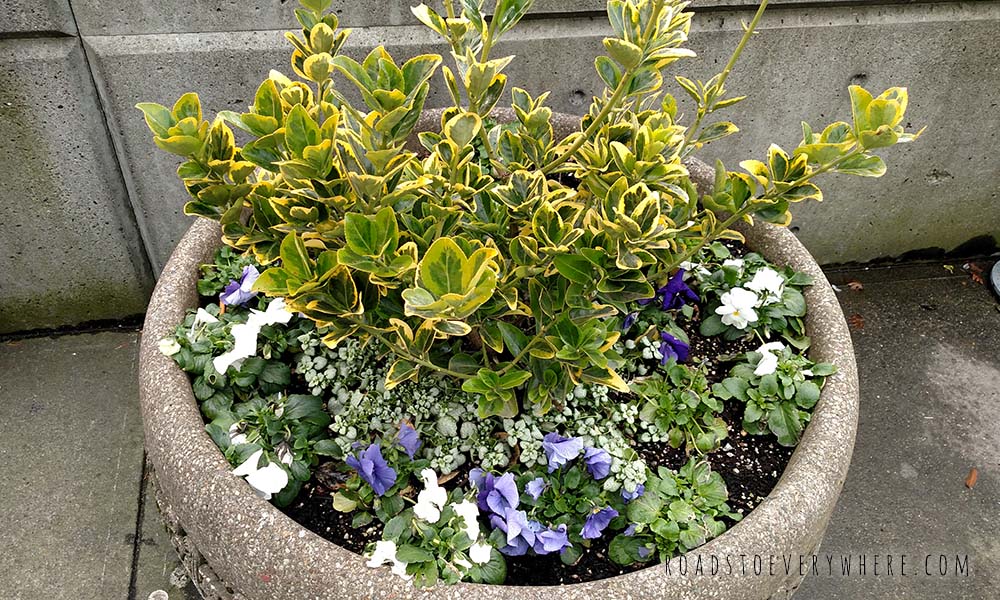 So we set out.

I was thrilled to see clusters of pansies happily blooming in pots at various places. Any flower that will bloom in February is a favorite of mine.

The RV show would be open until 8:00 so we had plenty of time to amble along and stop to look at whatever caught our interest.

I was intrigued by a little shop called Paper Hammer so we went in. It specializes in letter-press printed cards and gift items made with historical printing equipment. Coming from a printing background we found it interesting to see the creative ways the artisans had incorporated the vintage methods into their products.

We also stopped to explore an exhibit at Milepost 31 about Big Bertha, the massive machine that is currently boring a tunnel under the city for a new highway. 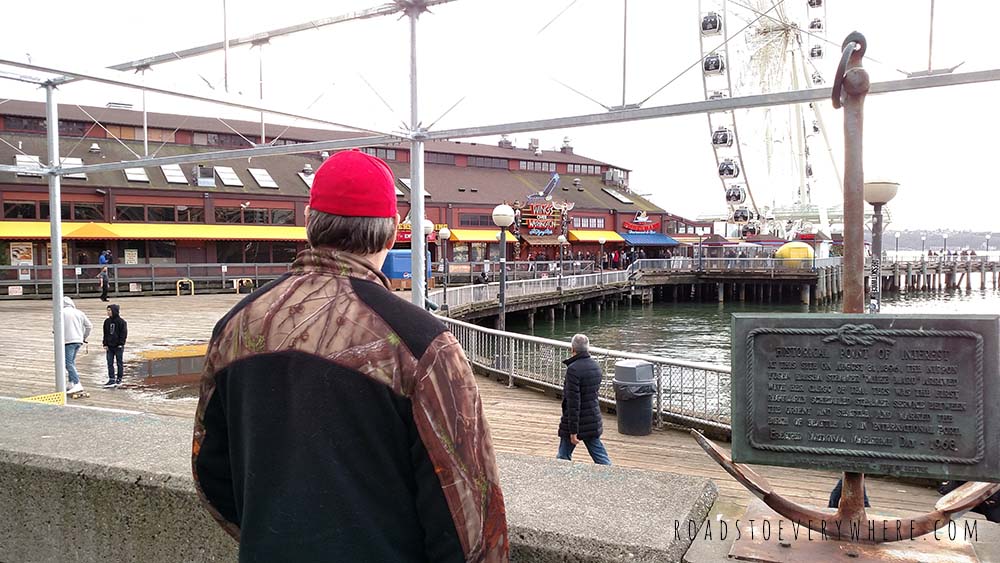 We watched the Great Wheel for a few minutes, remembering the time we rode on it. And we stopped in at the Pier 55 Starbucks for a cappuccino to sip as we strolled along. 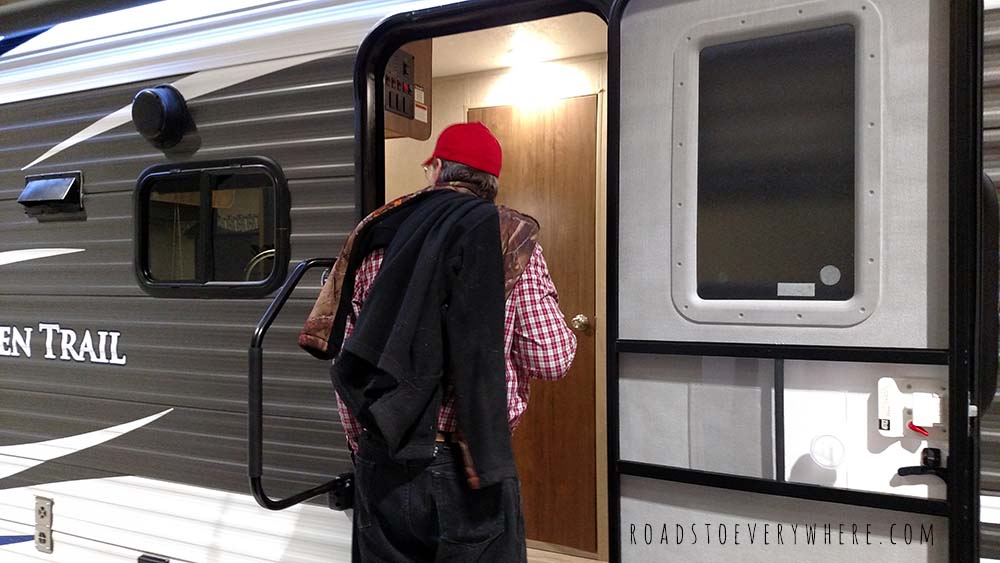 Finally we made it to the RV show at the Seahawks Stadium. By then we were just a little tired from all that walking, so we took opportunities to sit down on plush couches and recliners as we climbed in and out of RV after RV. 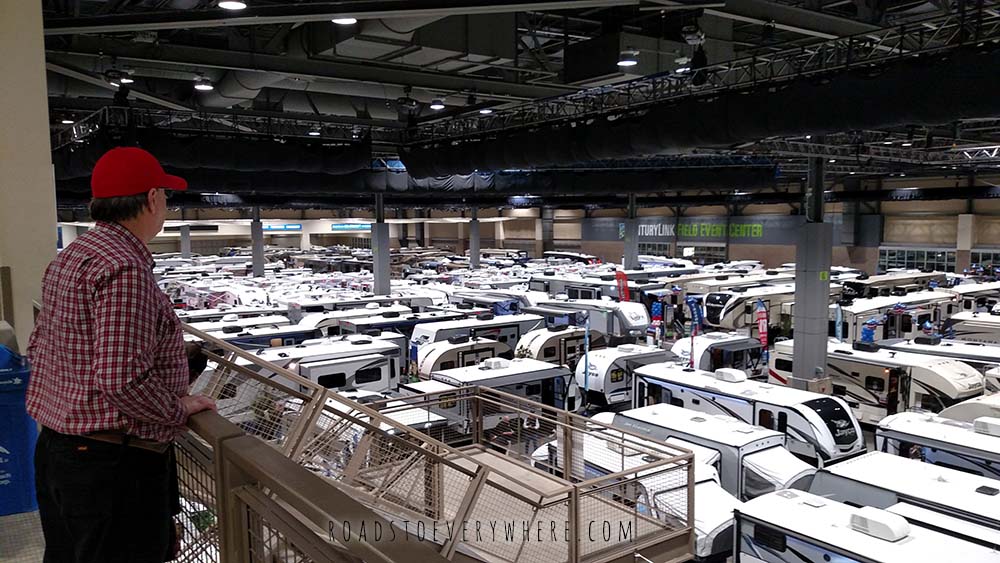 There were so many options to consider… from tiny pull-behind-your-car trailers all the way up to bus-class motor coaches. We came up with big ideas for any and all of them. 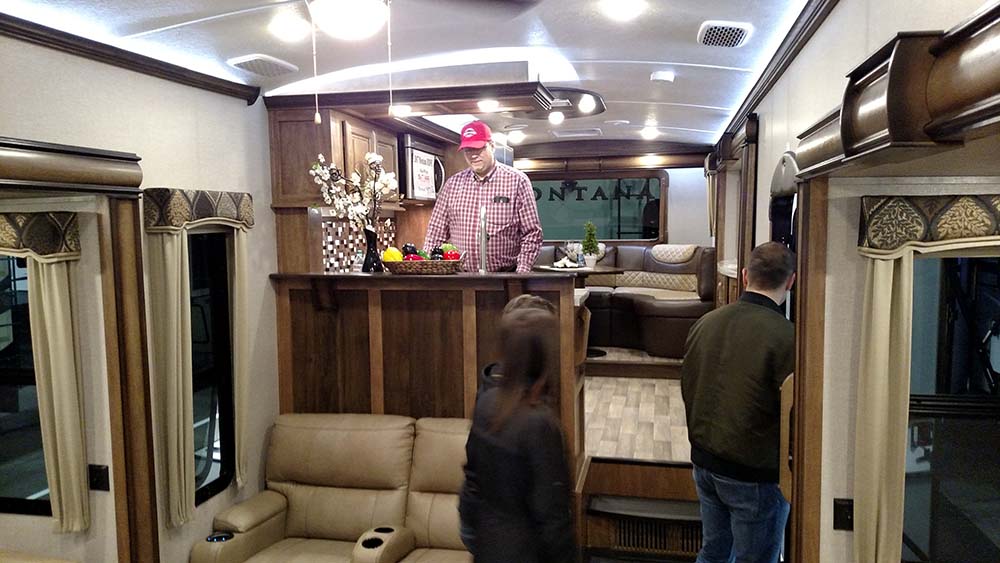 Our favorite unit was a long trailer with a kitchen in the front, living room in the middle, and bedroom in the back. It was nice enough to live in full time. Which we would love to do if we could only figure out a way to make a living on the road. (Any ideas for us?)

After 3 or 4 hours we were definitely tired and had seen most of what we wanted to look at, so we decided to head back to our hotel. 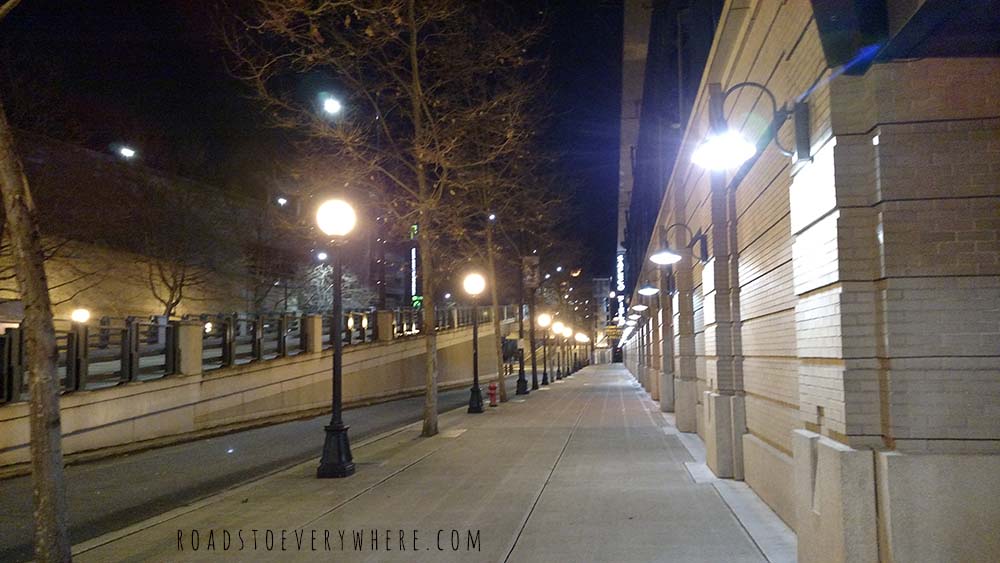 By then it was dark, but we knew there was a train station near the stadium. The street was well lit and Lyle thought he knew where to go. We headed down the street along Mariners field, which was at least 2 blocks long. When we got to the end we couldn’t get to where Lyle thought the station was because there was a fence along the tracks blocking our way. There was also a very tall flight of stairs nearby.

“Do you think we need to go up and over?” he wondered.

“Oh, probably so,” I figured, thinking of all the many blocks and flights of stairs we had already walked that day. (Seattle is built on the side of a hill, so there are lots of stairs if you are on foot.)

At the top, we still couldn’t see where to go. Google was no help because it can’t tell what level a person is on in a situation like that.

“Maybe we have to go around Mariners field,” Lyle speculated.

And so, we went back down the stairs and two blocks back the way we had come. When we got back to where we had started Google claimed that was not right. We were so confused. I said something about being lost.

“We’re not lost,” Lyle said. “We know where we are. We just don’t know how to get where we’re going.”

“Isn’t that the definition of being lost?” I asked. “Not knowing how to get where you’re going?”

He didn’t think so. His theory was that being lost was when you were disoriented and didn’t know east from west.

It didn’t matter. We were on foot and way too tired to want to wander around much more. The street was quite vacant for the most part, but finally we saw some people coming towards us. I’m usually hesitant to speak to people on foot in a big city, but I decided these people looked like they knew where they were going and probably weren’t vagrants who would try to hit us up for money.

“Excuse me. Would you happen to know where the light rail station is?” I asked. “Are we headed in the right direction?”

Fortunately, I had judged right and the people were happy to try to help. They had only ridden the light rail to the stadium once before so they couldn’t give us exact directions, but yes, we were headed in the right direction. We needed to go back down the street and up the stairs… and then on over the bridge and it would be in that area.

So we started out again. We got to the stairs and Lyle said, “I saw an elevator over here. If it’s working.”

He pushed the button. The doors opened and we stepped inside. “Hallelujah,” I said.

At the top we went over the bridge and then around under an overpass. Where there were two tents set up with presumably homeless people sleeping in them. That was a little scary. The truth is, many homeless people (not all, but many) are mentally ill and you never know what they might do. Thankfully, we were not accosted, and so finally arrived at the train station and were soon on our way back to the hotel.

According to Lyle’s smart watch we had walked 6.5 miles that day. That doesn’t account for all the stairs we climbed.

The next morning we went back downtown to see the flowers at Pike Place Market. I was happy to see the masses of tulips and a few daffodils, but it is still too early in the season for the full spring bouquets I got the other time. 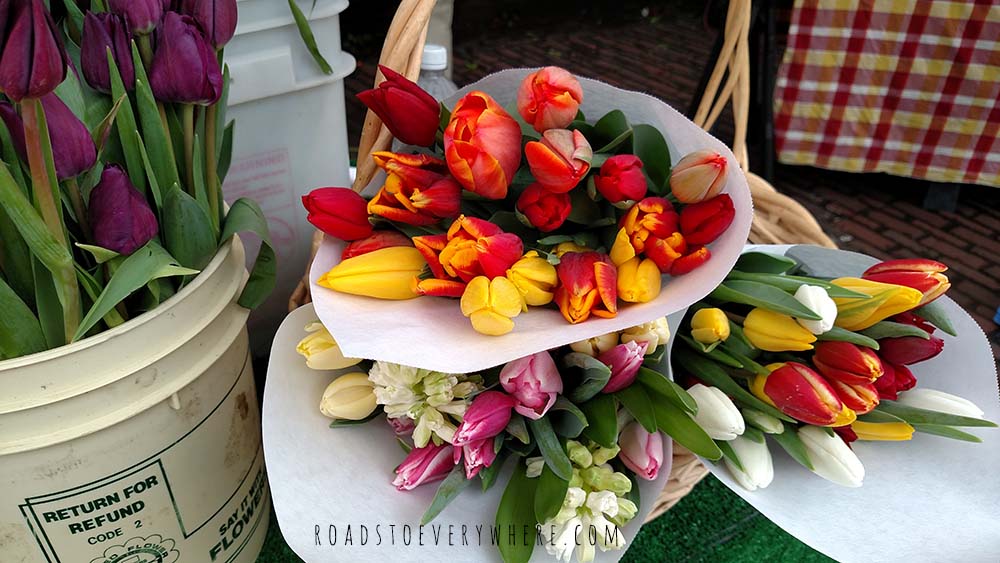 I love the vivid colors of the tulips this time of year when everything has been so gray and dreary for so long.

After walking around the Market for just a little bit, we headed home. 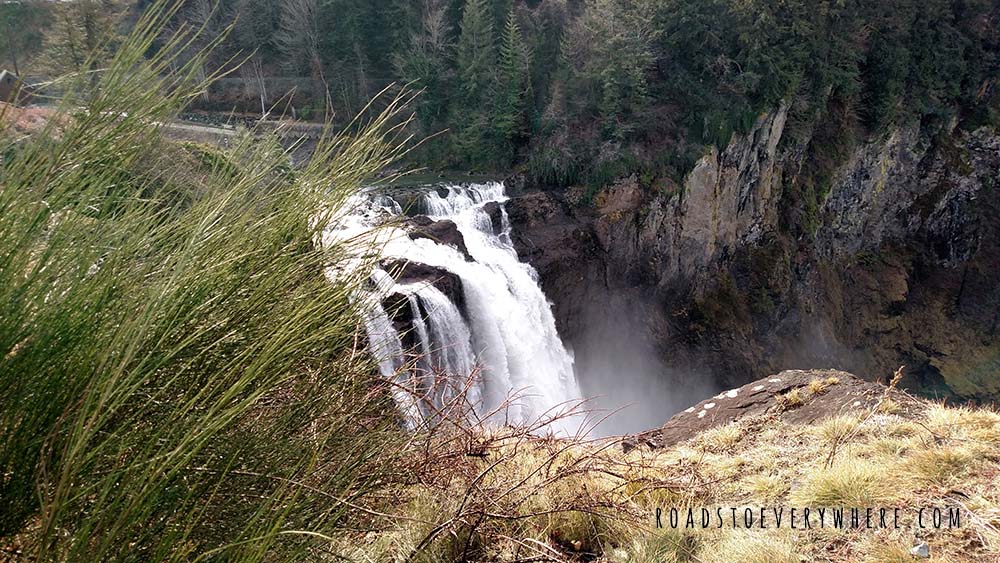 We did make one more quick stop to see Snoqualmie Falls which is glorious this time of year.

We agreed the weekend had been a fun adventure. After all…

So, what’s your opinion? Were we lost? Or not really?