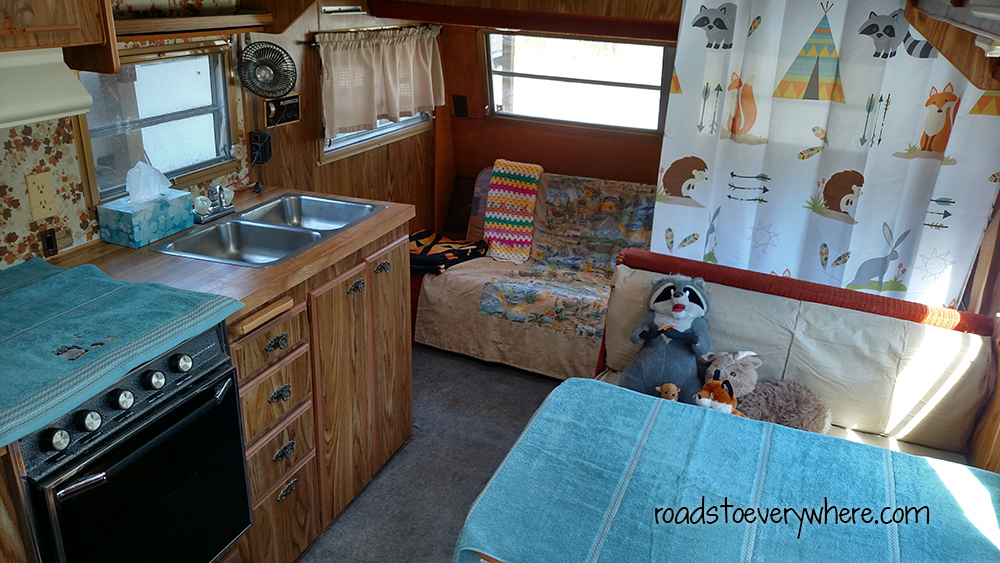 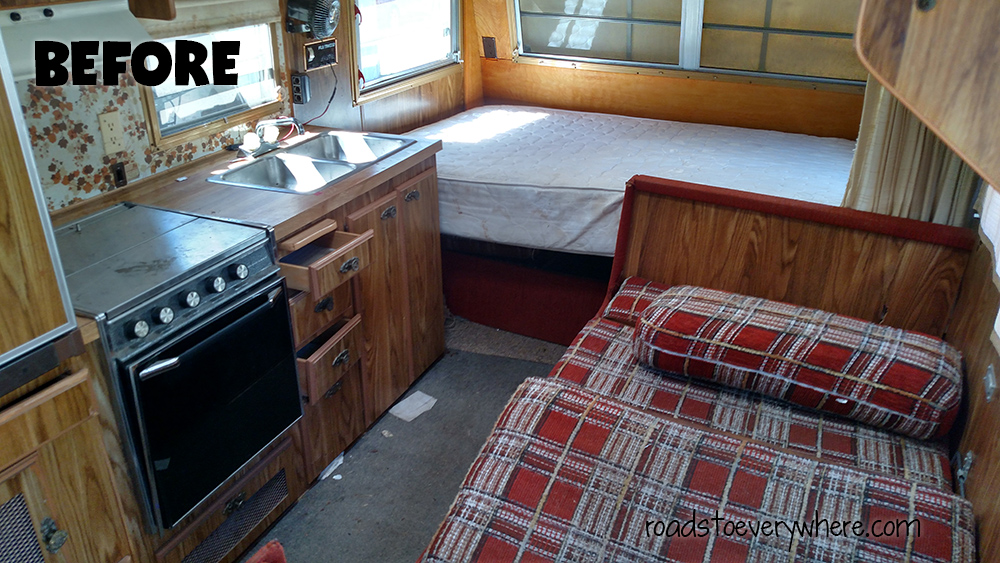 We still haven’t decided how extensively we are going to remodel the old trailer we bought last week. It really does need a lot of work, but we think it will be usable without a complete overhaul, so that’s our first objective–to get it to where we can at least use it for the basics. The first order of business was a thorough cleaning. 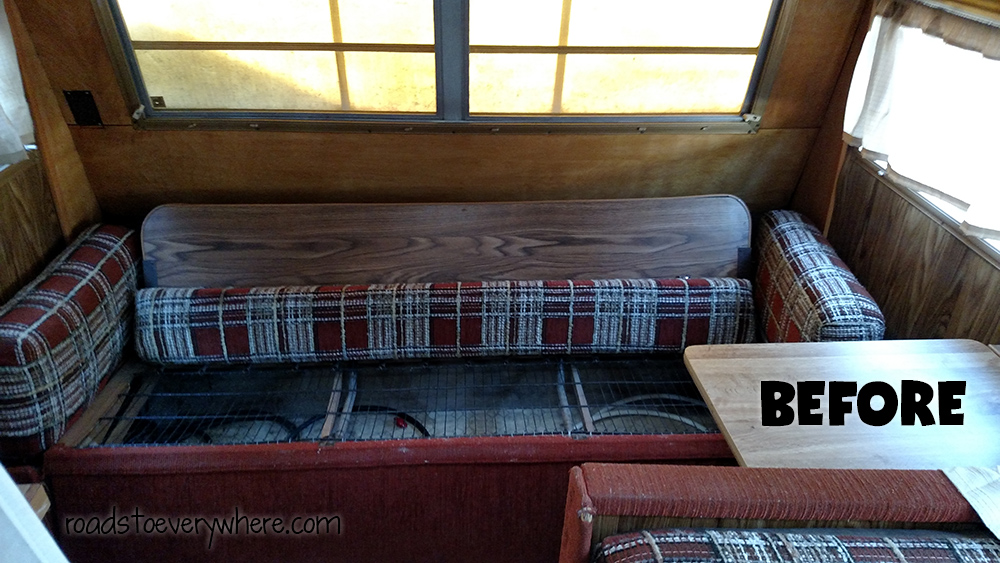 Like I mentioned in my previous post, the mattress is clean and in pretty good shape. However, it’s a regular full mattress (not a trailer mattress). Not only does it hang off the edge of the couch frame when it’s pulled out into a bed, it also does not fold up. In order to use it, we’d need to figure out a way to add support to one edge of the mattress and be willing to leave it set up as a bed. The original couch seat cushions are no longer in the trailer, but even if they were, the couch pulls out into a pretty small bed for two adults. Also, we’d like to have the use of the couch for seating in the daytime and access to the storage underneath. So we’ve decided to take out the existing couch and build a U-shaped couch kinda like this one, with a board in the middle that can be pulled out to make a bed. We’re hoping to tackle that project this weekend.

I was trying to come up with ideas to freshen up the interior without repainting everything. The curtains on the windows are in decent shape even though they are really too short for the windows. I took them down, washed them, and hung them back up until I get a chance to make new ones. The privacy curtain between the table and the bed was pretty tattered so I didn’t try to salvage it. 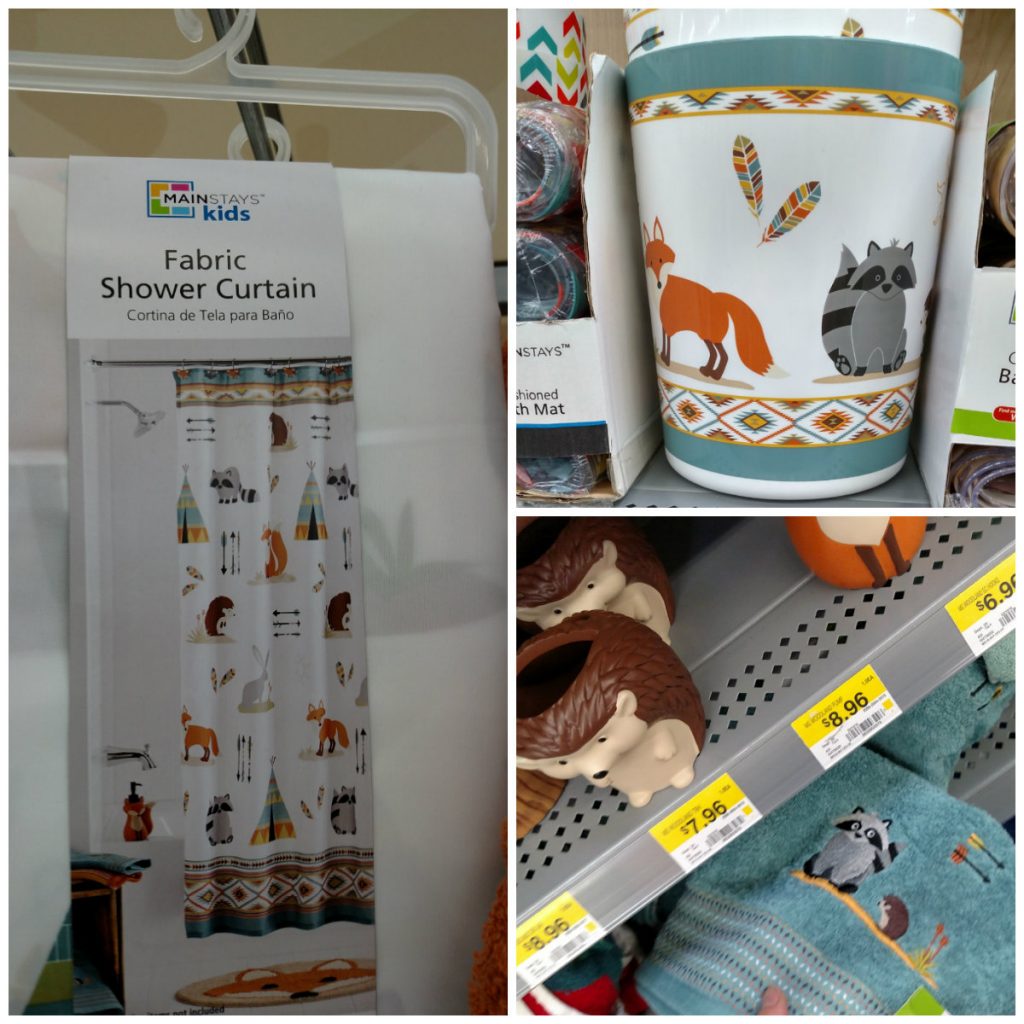 While browsing the home department at Wal-Mart I found this darling Forest Creatures bathroom set. The colors are perfect to go with what’s already in the trailer. The teal accents give it a modern feel. I love the small animals theme and I was pretty sure it would tie in with my Route 66 quilt that my mother made for our previous trailer. I checked to see if there was bedding to match, but no such luck. So I began to brainstorm how I could possibly incorporate the bathroom stuff. 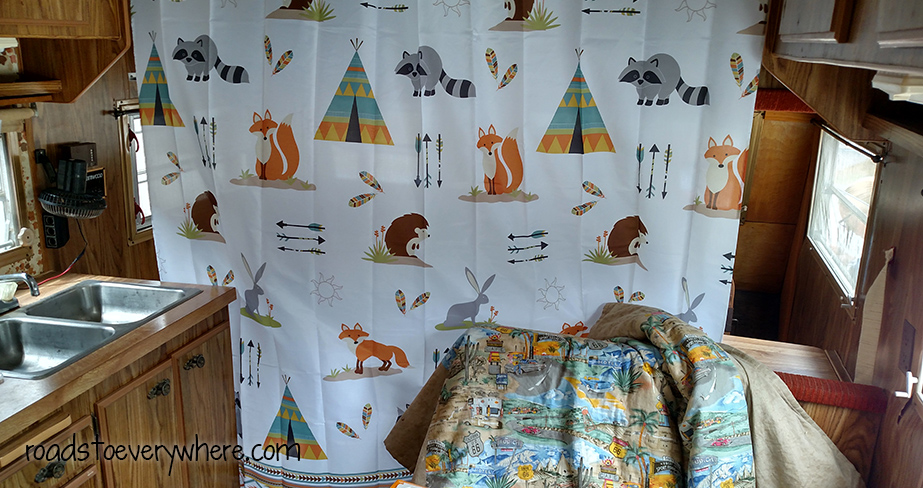 The shower curtain is nylon fabric (not plastic) so I decided it would work for the privacy curtain. I couldn’t wait to see if it would coordinate with my quilt. The colors are perfect, and while the quilt is a Route 66/vintage road trip theme, it has some Indian tee-pees on it, so they do sorta go together. Kinda south-westy, don’t you think?

Here’s how it looks now that I’ve scrubbed it from top to bottom and staged it. The quilt is just draped over the couch frame for now. I bought two of the teal bath towels (embroidered with a raccoon and hedgehog) to use as tablecloths… or as towels. Whatever.

I’m thinking of possibly a chevron stripe fabric in coordinating colors for the window curtains. Not sure what to cover the couch cushions. 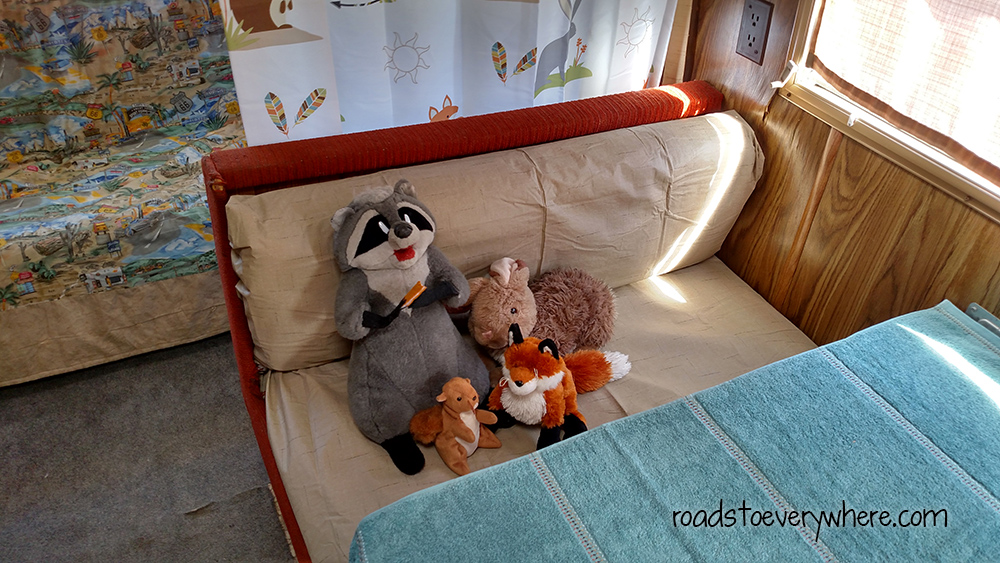 In the meantime, some of Rebecca’s friends have happily taken up residence in the trailer. Rebecca has always named each and every one of her stuffies. This is Who-coon, Brownie the bunny, Nuts the squirrel, and Nick the fox. You might have thought the raccoon was Meeko from Pocahontas but you would have been wrong. You see, Rebecca had never seen the Pocahontas movie when she got Who-coon, so she didn’t know he was supposed to be Meeko. She was about 3 at the time. She pronounced raccoon as “who-coon” so that became his name. Brownie was an Easter gift when she was 6 or 8. Nuts came along sometime in the Beanie-Baby era. Nick is a more recent addition to her collection, named after the character in Zootopia.

They are right at home in our trailer-project-in-progress. Stay tuned for more updates… and let me know if you have any ideas for me!

Also, we’re still thinking of a name. Maybelle and Ethel have been suggested. What do you think?