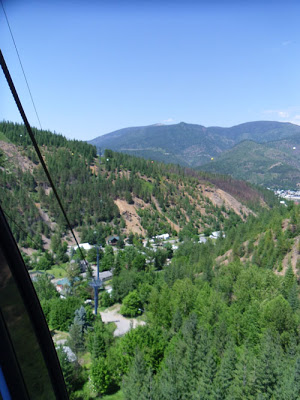 On Saturday Lyle and I decided we would take my parents (and our kids) to ride the “world’s longest gondola.” At breakfast we told them we had a surprise outing planned for the day. They should bring a jacket, a hat, and a camera. (Turns out the jackets were unnecessary, but in north Idaho you just never know. Even in the middle of July. Especially in the mountains.) When we arrived in Kellogg I went into the ski shop to buy the tickets. A friend had given me 4 passes to ride the gondola but they were very old. As in maybe 10 or 15 years old. She had hung on to them for a long time before passing them along to me about two years ago, as they no longer live in the area. But the passes didn’t have an expiration date printed on them, so I thought it wouldn’t hurt to see if the Mountain would honor them. The lady at the ticket counter didn’t hesitate to accept them but she did comment on how old they were. She told me they don’t even make them that way any more. (Turns out they had been printed all those years ago at the print shop where my husband works!) Now they print them on site with a bar code and an expiration date. Anyway, I was more than happy to save the $43!

So up the mountain we went. It was pretty warm inside the gondola cars, but we were able to open the windows, so it wasn’t too bad. 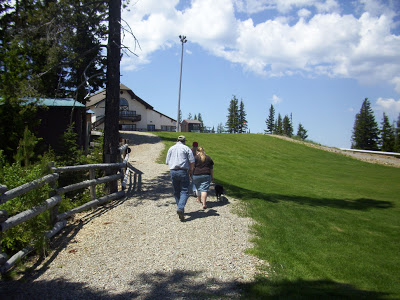 When we got to the top of the gondola we had hoped to ride the chair lift on up to the fire tower, which we have done other years when we’ve gone up in the summer. My parents opted to wait for us at the Mountain Haus. However, we learned that the Mountain no longer runs that chair lift in the summer. It’s still possible to hike to the fire tower, but we didn’t want to take the time to do that. So we went for a short hike on a nature trail. 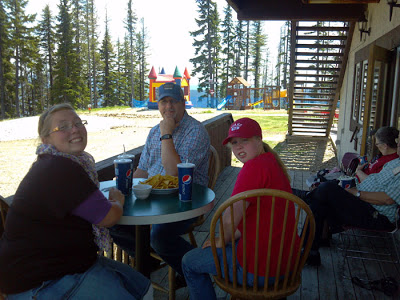 Then we headed back to the Mountain Haus for cold drinks and a light lunch on the deck. Cookie had come along with us, so we were glad to find a cool, shady spot to sit outside where she could be with us. Besides, the scenery was too gorgeous to go inside. 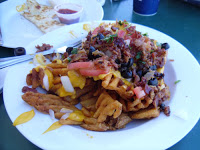 We especially enjoyed sharing an order of Idaho Style Nachos, made with crispy fried potatoes instead of tortilla chips. Such a healthy lunch, don’t you think? It was yummy, though.


As we prepared to board the gondola for the ride down the mountain I happened to run into my dentist’s assistant. We visited for a minute or two. She told me she was coordinating a wedding and was waiting for the bride and groom to arrive. I had noticed a sign at the ski shop at the bottom directing members of the wedding party to proceed directly to the gondola, and on our hike we saw where the chairs for the ceremony were set up. Such a gorgeous setting for a wedding.

While we were riding back down we saw the silver VIP car coming up. When it got close enough to see in through the windows we saw that it was the bride and some of her attendants. Other attendants were in cars following. (Each car seats 6-8 people and they only use the silver VIP car for, well, Very Important People, I guess. Other cars are green and blue.)

Then it occurred to me. We could have stayed at the top long enough to see the bridal party arrive. I mean, I should have known they would be up shortly since the wedding coordinator was standing there with the flowers waiting on them. It would have been fun to lurk in a corner and discreetly gawk. Too bad I didn’t think of it sooner! We “girls” would have enjoyed it, anyway. I expect the men were just as happy that we had gone on about our business. 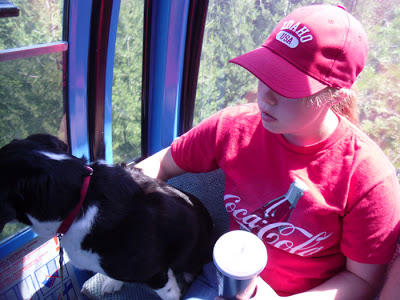 It was a fun summer adventure that I’m sure we’ll all remember for a long time. I’m glad we got to go.