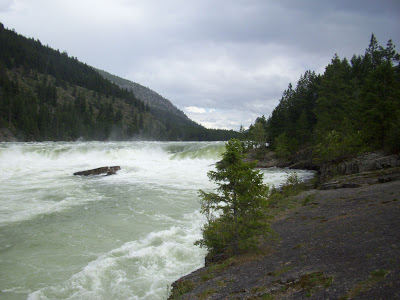 It’s 7:00a.m.-ish and the temperature is currently 44 degrees. My parents arrived for a visit yesterday. They live in Arkansas where it has been oh-so-much hotter and drier. This morning when we got up my dad told me that our air conditioner works good. Ha. The only air conditioner we have is a small window unit that’s not even currently hooked up. I love living where we can have the windows open all summer long. I do feel for those of you who live in other parts of the country where the weather is at the opposite extreme. We have had so much more than our share of rain this year. I would gladly send some your way if I could.
On Sunday we took a day trip to visit some more water falls in the area. (We had visited Copper Falls the week before while we were camping.) Some of the rivers are at flood stage, so the falls are pretty dramatic this year.
Our main destination was Kootenai Falls which we have visited several times before. The river was so high that the falls were almost hidden. That’s an awful lot of water.

The other one we visited was a new one for us. Lyle had referred to hisWaterfall Lover’s Guide for directions to Snow Creek Falls. 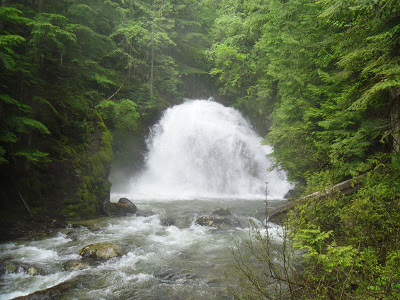 We found Snow Creek but couldn’t figure out where the trail was, according to the book. Finally, we had given up and were headed back to the main highway when I had the idea we should check to see if there were any geocaches in the area. Turns out there was a micro-cache on the trail to the falls, so by following the directions on Geocaching.com we finally did find the trail-head. The directions in the book were simply out-dated.
It was quite a hike to get to the viewing points for the Lower and Upper Falls. Not only that, but it was a damp day and kept trying to rain. The tree coverage was pretty heavy so we didn’t get soaked, but it was definitely an adventure. We never did find the cache. I’m not sure why anyone would bother with a micro-cache that deep in the forest. There are a gazillion places it could have been, and the satellite signal wasn’t much help with so many trees.
My camera battery had died so Laura was the one taking pictures. She snapped one of Lyle and me standing in front of the falls. 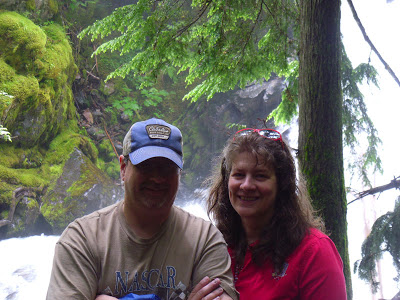 After she took it, she realized that her dad’s face was too shadowed by his cap, so she asked him to adjust it so she could take more. And she did, but I still liked this one best.
I usually don’t like pictures of myself. (Do any of us?) I thought the picture I had been using for my Facebook profile was just a little too posed. This one was much more natural. I decided to crop my face out to use for my profile. I used Photoshop to lighten it up a little. I was surprised at how many comments I got after I posted it. One friend even said she liked my hair. Which made me laugh because I had done absolutely nothing to it that day. I had washed it that morning, ran a comb through it, and let it air dry. By the time the picture was taken it had been scrunched and wind-blown, and I had just shoved my sunglasses up on my head. I guess I’m just a natural kinda girl.

Now we’re off to celebrate our independence with lots of festivities. Talk to you later.