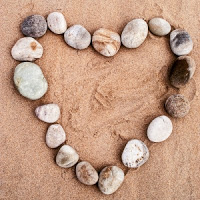 The summer I was 16 I almost met my future husband. It happened like this:

Every four years our denomination held a General Convention. This was where the preachers and important laymen in the church got together and took care of church business. For us teenagers, it was a chance to socialize with other young people with similar church background.

This was a good fifteen years before the internet went mainstream, and well before practically everybody carried a phone around in their pockets. So we wrote letters. With a stamp. Mailed at the post office. And waited a week or more for a reply. Hard to imagine, isn’t it? I had several friends I wrote to regularly, including my aunt Rachel (who was 18 that summer and had just graduated from high school), and my friend, Denise (who was also 16).

That was the year for our General Convention and we girls were eagerly looking forward to it. Mostly with the hopes of finding a boyfriend, though we didn’t admit that out loud to very many people. Rachel already had her eye on a guy she had got acquainted with the previous fall, but I wasn’t sure exactly who to be interested in.

My family lived in Ohio at the time, and the convention was in Wichita, Kansas. We had borrowed a pop-up camper to stay in on the campgrounds. As we were setting up, I noticed a young man sitting behind the wheel of the little car parked by the trailer in the next camp site. I didn’t know who he was. Dad was out socializing and when he came back he told us that was “Brother Cook, the general treasurer, from California” next door.

“I bet that Cook boy likes to drive,” was my first impression. I wondered how old he was. He never was in the group of young people we hung out with, so I didn’t think too much more about him. I was too busy running around with Denise, having a good time speculating about boys.

Rachel and “Mr. Romantic Porch” quickly hit it off so I didn’t see too much of her. And by the end of the week one of the other boys had asked to sit with Denise.

No one seemed very interested in me. I was too tall, kinda geeky with over-size glasses, and probably not the most brilliant conversationalist. I figured I would probably never get married. It was quite depressing.

And then, on the very last day, as I walked across the campground… that Cook boy winked at me! In that instant I knew that was the man I was going to marry.

That was 30 years ago this summer. And here we are… living happily ever after!

Except that part about the wink? That never happened. He was very reserved and, being from California, didn’t know any of the other young people, which is why he wasn’t part of the group I hung out with. Of course I had no way of knowing that I had been eyeing my future husband all week.

“That Cook boy” never even knew I existed until the next spring. He doesn’t remember seeing me in Wichita the summer of 1982.

But the happily ever after part? That part is true!