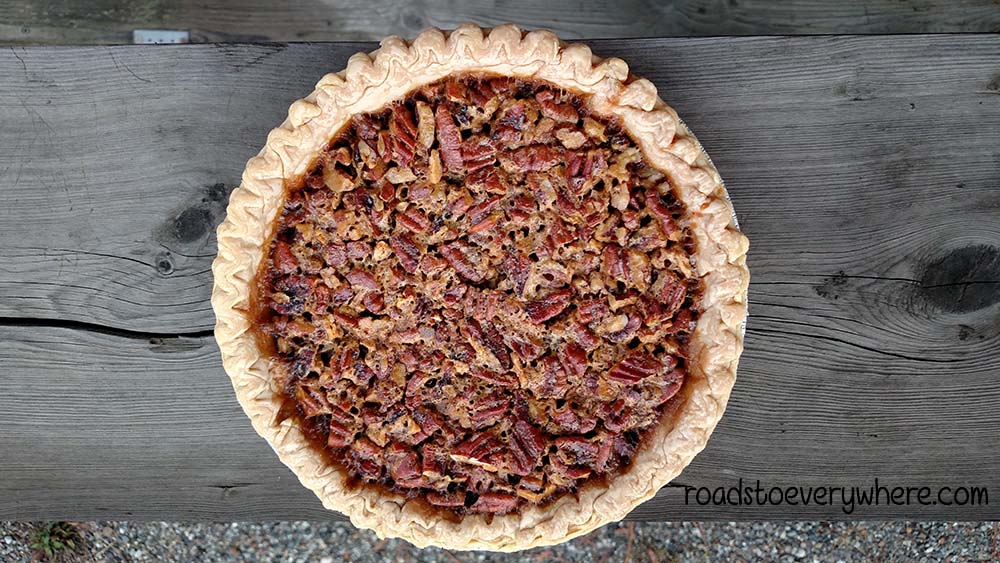 My dad has an unusual hobby. If it’s a good year for pecans, he likes to buy a 50-pound bag or two of them in the shell, and then he sits and shells them by the hour. You might wonder what he does with all the pecans he shells. Why, he gives them to his kids, of course! Seriously. How cool is that? I love pecans.

Last year Dad and Mother were at our house for Thanksgiving, and Dad brought me a gallon of shelled pecans. As I began cooking Thanksgiving dinner he told me, “Now, you don’t have to take pecans out of your bag for any that you want to use for dinner. I’ll give you extra for that.” So I went a little crazy. I topped the sweet potatoes with pecans, and then I made pecan pies and date nut candy. It was all wonderfully delicious.

Pecan pies are something of a tradition in my family. Mother said, “The first pecan pie I ever remember eating was made by Aunt Nina [Uncle Lawton’s wife], who was a very good cook. When she was no longer able to cook, Uncle Lawton baked pecan pies and sold them.”

You might remember from my Thanksgiving post earlier that Uncle Lawton was my Granddaddy’s brother. He lived in Texas. Maybe he had a pecan tree or several. I’m not sure about that. But he was “famous” in the family for his pecan pies. In the summer of 2005 he visited my parents in Arkansas and baked a number of his pies for our family reunion that summer.

Thanks to Dad, I still had some pecans in my cupboard this fall. If it had been up to me, I would have snacked them all away, but he admonished me: “Now stop nibbling on those! They aren’t for snacking! They are for baking!” So I tried to stay out of them… and I had just enough to make a pecan pie for Thanksgiving. Maybe I’ll get some more for Christmas. I heard a rumor that it was a good year for pecans.