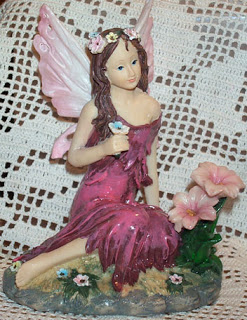 I was just slightly baffled when my little girl presented me with this scantily-clad fairy figurine for my birthday a couple years ago. Obviously, Rebecca thought it was a beautiful piece of brick-a-brack, but my mother had taken her shopping and I really thought Mother had better taste than that. The first thought that went through my mind was, “Surely she didn’t mistake it for an angel?!” But it all became clear when my daughter sweetly asked, “How you like your tooth fairy, Mommy?”

I don’t know why I didn’t recognize the tooth fairy immediately! Now she occupies a place of honor in my bathroom, which is where all scantily-clad figments-of-the-imagination belong!

It reminds me of an incident from my childhood:

I lost a tooth while we lived in the trailer-house on Granddaddy’s property, when I was in first grade. At our house we didn’t put a lost tooth under our pillows for the tooth fairy to find. Instead Mother had us put it in a glass of water on the table. I don’t know if anyone else ever did it that way, or if that was something Mother came up with… but I’m sure it was to help serve as a reminder to the “tooth fairy” to not forget to trade the tooth for some loose change. So I put my lost tooth in the glass of water and I was determined to watch for the tooth fairy and see her when she came.

(Mother says she never tried to make us believe in the tooth fairy or Santa Claus, but we did anyway. I believe her, because I’ve done the same thing with my children. You can explain all you want to, but children are great pretenders and can believe about anything!)

As I was carefully watching the glass with my tooth in it, one of my teenage uncles came in. When Mother explained that I was watching for the tooth fairy he said, “Oh! I saw the tooth fairy flying around outside. You better go outside and see if you see her out there.”

And would you believe? The tooth fairy took my tooth while I was outside! I never did see her. And mother and whichever uncle it was declared that they hadn’t seen her either! That tooth fairy. She’s a sneaky sort of character.