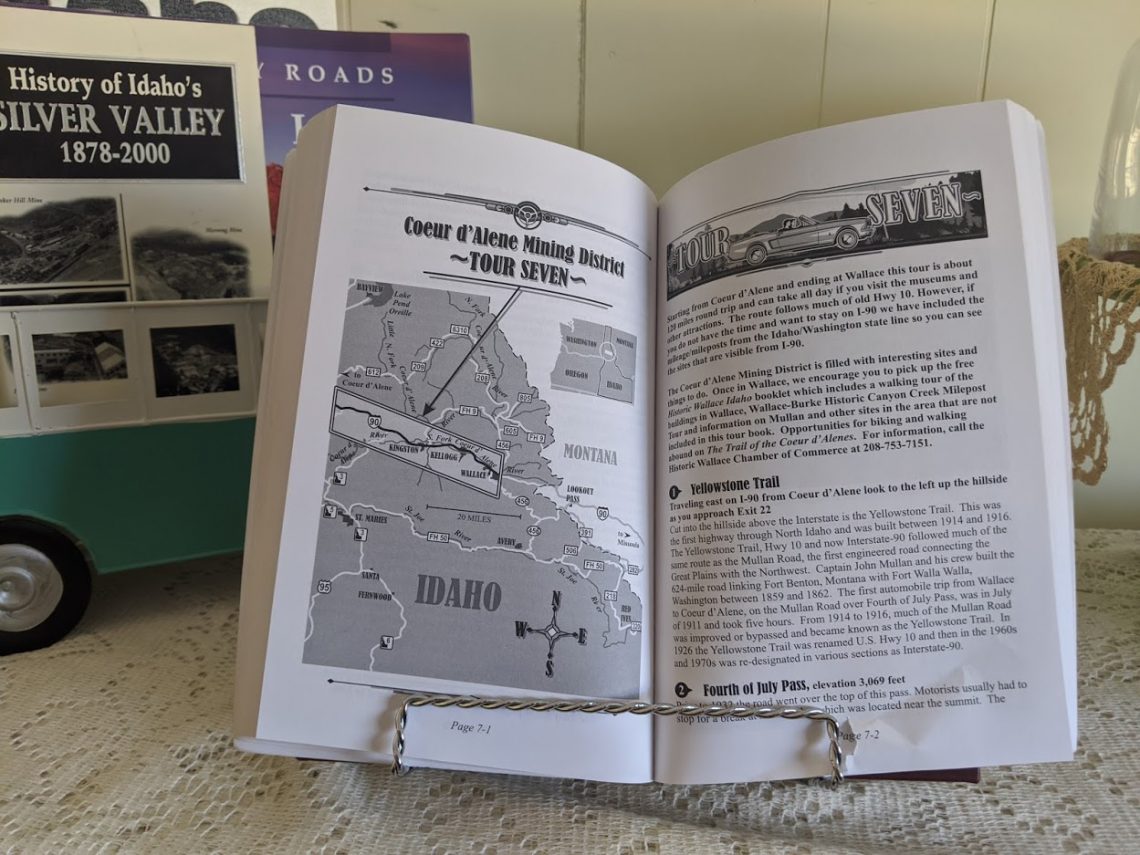 I had thought to divide the rest of the Silver Valley tour into two more parts, with one part being Kellogg and Wardner, and then the last part being Osburn and Wallace… but I’ve decided to just go ahead and share the rest of it in this one post. Granted, I’ll just hit the highlights, but I think that will work because I definitely didn’t get pictures in Kellogg of all the sites listed in the Roads Less Traveled book and many of the sites in Wallace aren’t even listed in the book because there’s a separate walking guide for that town.

In case you missed them, here are links to the previous parts of the tour:

Kellogg is where we lived when we first moved to north Idaho back in 1998. We lived there 4 years before moving “over the pass” to the Coeur d’Alene area.

The day of our driving tour last spring we came into Kellogg on the back roads from the west.

This building was built in 1906 for a mine executive and his family. In 1923 they “moved to Coeur d’Alene and the house was converted to a residence for single staff of the Bunker Hill [Mine] Company.” When the mine closed in the 1980s it was turned into a museum. I always meant to visit the museum while we lived there, but it had limited hours so I was never sure when it was open. I still haven’t been there.

On the side of the mountain up above Kellogg is a small community that I’m told is the town of Wardner. I, personally, can’t tell where Kellogg ends and Wardner begins… and the oddest thing to me is that the street kinda dead-ends on the mountainside. I mean, it does connect to a dirt road that meanders on up the mountainside and I understand that it’s possible to get to the top of the gondola from there. We’ve driven a ways up the dirt road in the past, but never all the way up to the top.

In any case, the only sign of the “town” of Wardner that remains is the Wardner Gift Shop and Museum. This is another museum I have never visited, due to limited hours. We’ve been up that way a number of times but I’ve never noticed the museum to be open.

Of most interest to me, though, is the yellow sign on the side of the building. The one that says “Blackwell’s Reminder Printing.” My brother-in-law Loren told me he gave that sign to the museum.

You see, down on Main Street in Kellogg (just a mile or two from the Wardner Museum) is an old-fashioned print shop that Loren bought back in 1986.

Here’s what the book has to say about it:

I don’t know anything about it between the 1950s and 1986 when Loren bought it, but it was still Blackwell’s Reminder Printing when he took over. He changed the name to Progressive Printing at that time, and he gave the old sign to the museum. I really like his original logo with the outline of the mountains and the name in script. The two pictures above are from 2016 before he re-branded as ProPrint.

I took this picture the day we toured the Silver Valley earlier this year. It was a Sunday so naturally it was closed. We were just there last night and I noticed that they finally did get the hanging sign replaced, but it was after dark so I couldn’t take a picture of it.

The Kellogg shop is original location of ProPrint but at this time most of the production is done in our Post Falls location. (And yes, I say “our” even though I don’t own it! Lyle and I are both employed there. It’s Lyle’s full-time job, and I work part-time mostly in community relations these days.)

There are many other interesting stories in Kellogg, but I don’t have time to share them all today, so I’ll just hit a few more highlights…

It was gray and drizzly the day we made the tour… but I found this other picture I had taken on a sunny day in 2016 of the same view but from the other side of the street. You can see the print shop halfway down the block. The building on this end of it was, I think, the Sears store until the late 1990s. The longer building on the other side of the print shop was the Odd Fellows Hall, built about 1890. Over the years it has been used for a wide variety of businesses.

Down the hill and around the corner is the Excelsior Cycle shop in the old freight depot. It was built between 1909 and 1914. I’m not sure exactly when it stopped being used as a depot, but it was sometime after the 1950s. According to the book it is now owned by the City of Kellogg but it was leased in 1999 to Excelsior Cycle. I bought my bike there not too long after that. It’s a pretty cool bike shop, and the most convenient thing is that the old railroad bed that runs along beside it has been converted to a bike trail.

This unique building is on the eastern edge of Kellogg. It was built in 1937 as a restaurant. It has apparently been a real estate office since 1967.

There’s a little memorial park along the Interstate between Kellogg and Osburn commemorating the Sunshine Mine Disaster of 1972. “The Sunshine Mine fire was one of the worst hard rock mining disasters in U.S. history. On May 2, 1972 there were 173 men underground on the day shift when a fire broke out in the wood timbering of the Sunshine Mine. Eighty men escaped and 91 died of suffocation from carbon monoxide.” Their names are inscribed on the base of the statue.

There are a couple of buildings Osburn that I found particularly interesting. The Zanetti Brothers concrete business has been in this location since 1935. “The sign on the building is the oldest continuous working neon sign in the entire Northwest…”

Here’s another unique building to go along with the Miner’s Hat. I think it’s a private residence now, surrounded by other houses. In fact, we had to hunt for it because it doesn’t really stand out all that much as you’re driving along.

It was built in the late 1920s or early 1930s as a barrel-shaped restaurant. “June and Robert Hamer bought the Barrel in 1947 and offered curb service and car hops. A projector pointed out of the small upstairs window to a large screen along the west side of the lot. People would watch the movies from their cars while local kids sat on the logs in the parking lot. Car hops filled burger orders as the movie played.” Can’t you just visualize that?

I’m going to conclude our tour of the Silver Valley with the Depot museum in Wallace. I have visited this museum in the past. It is well done with lots of tidbits about the railroad. However, the town of Wallace itself has a very colorful past. We were out of time that day, so we didn’t delve into that, though I’m sure it would be very interesting.