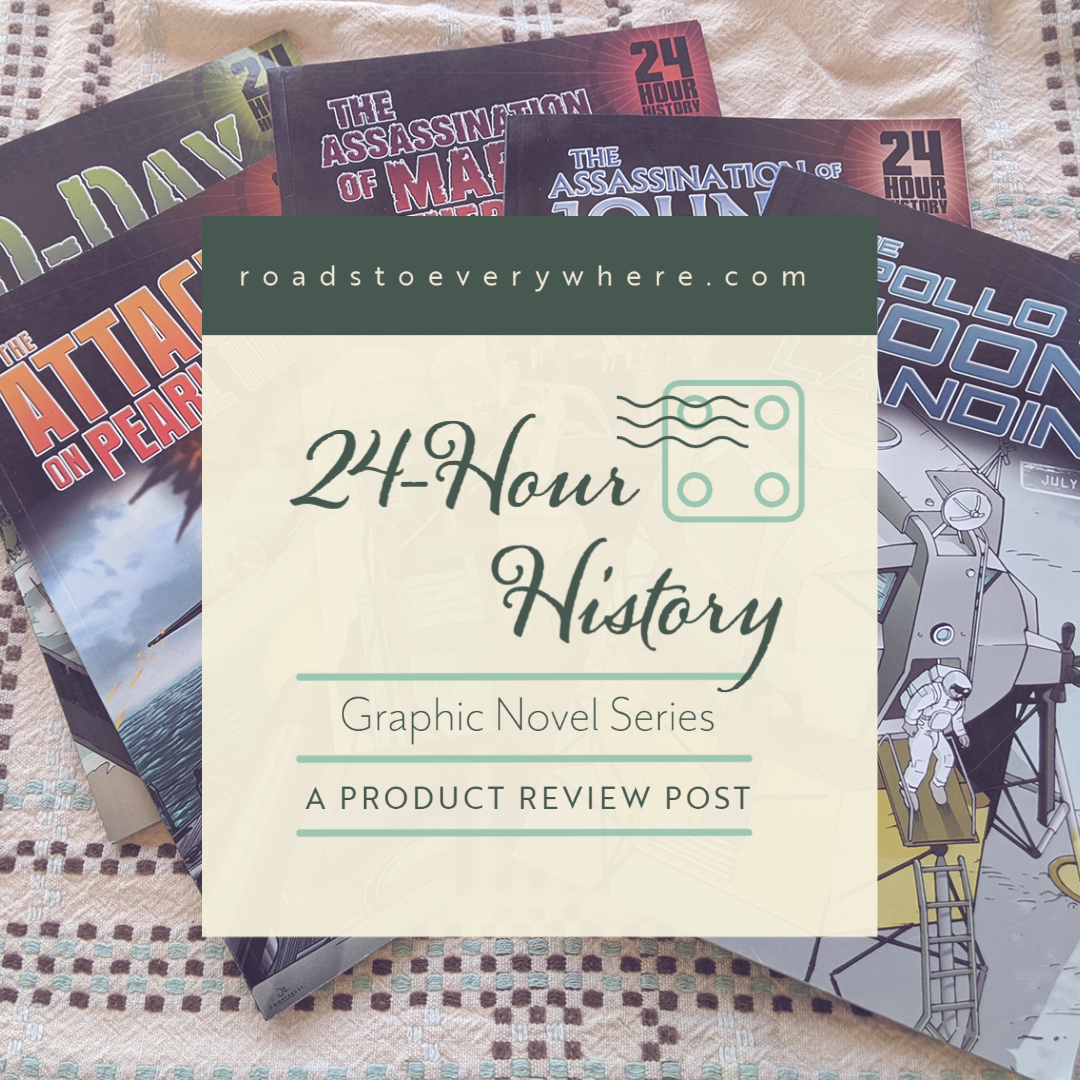 Have you ever contemplated how quickly life can change? Many changes are slow and gradual, but occasionally events come along that happen so unexpectedly and instantaneously… and change our lives forever.

During this whole crisis that has been 2020, I’ve thought a lot about other challenging events throughout history and how our ancestors managed to survive those times. Or maybe they didn’t survive. The sobering reality is that survival is not always guaranteed. Still, I think trying to learn from history is important.

With that in mind I was very interested to read the 24-Hour History graphic novel collection that Timberdoodle sent in me in exchange for my review. “Some events in history not only unfold rapidly, but their impact can last for generations. That is the premise behind 24-Hour History, a series of beautifully illustrated graphic novels with a focused look at one critical day in US history.”

There are many, many events that could have been included in this series–and maybe more are in the works, I don’t know about that–but for this collection, the events are from the mid-20th century.

I don’t remember any of these events. I was either not yet born or too young to be aware. I have read about them, seen movies, and heard the stories. What I found super helpful about this “graphic novel” (or comic book) style book is that the pertinent information is distilled down to give the reader a good grasp of the details while the artwork added in the emotions of those pivotal days.

The Attack on Pearl Harbor

“A date which will live in infamy…” My mother was an infant of 11 weeks when the Japanese bombed Pearl Harbor, and the United States entered World War II. I first remember learning about Pearl Harbor by reading We Were There at Pearl Harbor by Felix Sutton when I was probably in middle school. It was a fictionalized account of two teen siblings who lived in the area of Pearl Harbor. It naturally portrayed the horror of the day, and that’s pretty much all I knew about it at the time.

I appreciate how this book includes the “back story” of the events leading up to the attack… and then walks you through the events of that fateful day. The back of the book includes a 2-page summary of World War II, a timeline for the attack on Pearl Harbor, brief bios of some of the key players (or “Cast of Characters”) of this event, a glossary, a bibliography, and an index. Quite a lot to pack into 48 pages, most of which are covered with full-color pictures!

I don’t think I even understood what D-Day was until I was learning teaching history with my own kids. I knew it had something to do with World War II, but that’s about it. My dad was a toddler of 18 months when the Allied forces landed on the beaches of Normandy, France.

This book follows the same format as the Pearl Harbor book, with an introduction leading up to D-Day and then the day’s events. It explains why this invasion was so crucial in the Allies’ efforts to win the war. It includes a good map showing where each of the beaches was in relation to the others and all the intricate details that were a part of this massive plan.

I can’t even begin to imagine the bravery of all the men who were a part of this historic day, who went into it knowing that it meant certain death for far too many. There’s no way a 48-page “comic” book can cover all the details and all the stories, but it could definitely pique one’s interest to learn more. That’s what I appreciate so much about this series.

The Assassination of John F. Kennedy

My parents had met but hadn’t yet started dating when President Kennedy was killed. It was precisely two years and two days before I was born. It was one of those days that everyone forever remembered where they were and what they were doing when they heard the news.

One feature I like in each of these books is that the speech bubbles that are direct quotations are colored pale yellow rather than white. For example, in the picture above where Mrs. Connally says, “Mr. President, you can’t say Dallas doesn’t love you, “… that’s a direct quote. And then, on the next page, President Kennedy says, “No, ma’am. They know how to make a man feel appreciated, “… that’s not a direct quote, but rather what he might have said. (I’m not sure how they knew what she said, but didn’t know for sure what he said in reply… but anyway…)

I was two-and-a-half when Dr. King was killed. Even though I was so young, you would think that I would remember at least a little bit of the Civil Rights movement that continued even after his death, but I don’t. Desegregation was already a done deal by the time I was in school, and as far as I could tell, it had always been that way.

I have read other biographies and books about the Civil Rights movement, but this specific book focuses mainly on the day Martin Luther King, Jr. was assassinated. I had probably read it before, but maybe I had forgotten that he was only 39 at the time!

Spoiler alert: Of the five books, this is the only one that doesn’t include somebody dying. I bet you already knew that, though.

I remember a few things from 1969, being three years old. I have distinct memories of getting a new baby brother in April and “helping” my parents decide on his name. However, I do not remember the moon landing. Maybe because we didn’t have a TV, but probably because I was still young enough that my “world” was limited to my home and family and people I knew in real life.

Maybe the thing that amazes me the most is that each of us currently carries around a computer in our pocket that is more powerful than the computers that put a man on the moon. I had heard that before, and it was mentioned in this book as a sidebar “Fast Fact.”

I highly recommend this series as a very accessible way to get a good overview of each event. These books are suggested for ages eight and up. I think “and up” is accurate, not just for reluctant readers. As you can tell, I got a lot out of them myself. I learned a few new facts, but more than that, I got a better understanding of the “big picture” behind each event. For a young student, it would help make future reading more meaningful.