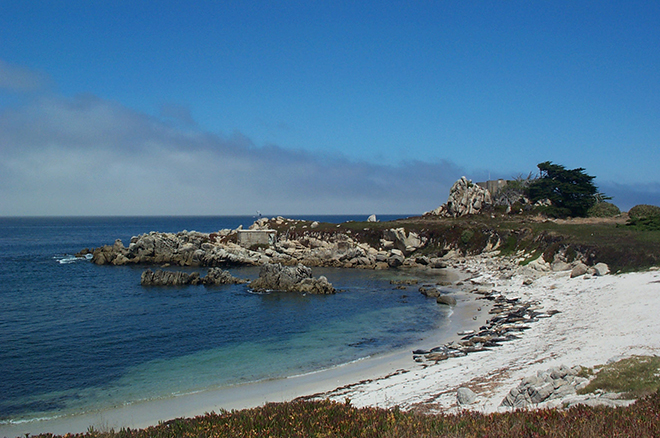 On Day 5 of our roadtrip we drove up the central coast of California on Highway 1. It was pretty foggy – not ground fog to make road visibility bad – but enough to make it hard to see the ocean. I guess that’s typical for mornings this time of year. The fog finally burned off about noon and we enjoyed a sunny, clear day with moderate temperatures.

One place we stopped along the coast was beach where Elephant Seals lived. They are great big critters with funny bent noses (like very short trunks!). There was a whole bunch of ‘em snoozing – and snoring! – in a pile on the beach. Every now and then another one would come out of the water and scootch up to the pile to join in the community nap, or one would up and squirm back out to the water. They used their flippers like hands! They’d lay there and flip sand up on their backs… or lay on their backs and scratch their tummies with their flippers. It was neat to watch them. Later in the day we saw a batch of Harbor Seals on Monterey Bay. They were smaller than the Elephant Seals, and some had babies. The highlight of the day was a visit to the Monterey Bay Aquarium. We had a personal tour by one of the volunteers, who is the teenage son of a friend! They went with us through the aquarium, and knew a lot about it to tell us that we wouldn’t have learned otherwise. DH and I had been to the aquarium once about 18 years ago. That was before we had kids. The aquarium has expanded quite a bit since then, so it was fun to see the new exhibits. My favorite exhibit was still the sea otters. They are so much fun to watch!

We spent 2 or 3 hours at the aquarium and then went to the beach for a few minutes to let the kids wade and look for shells.