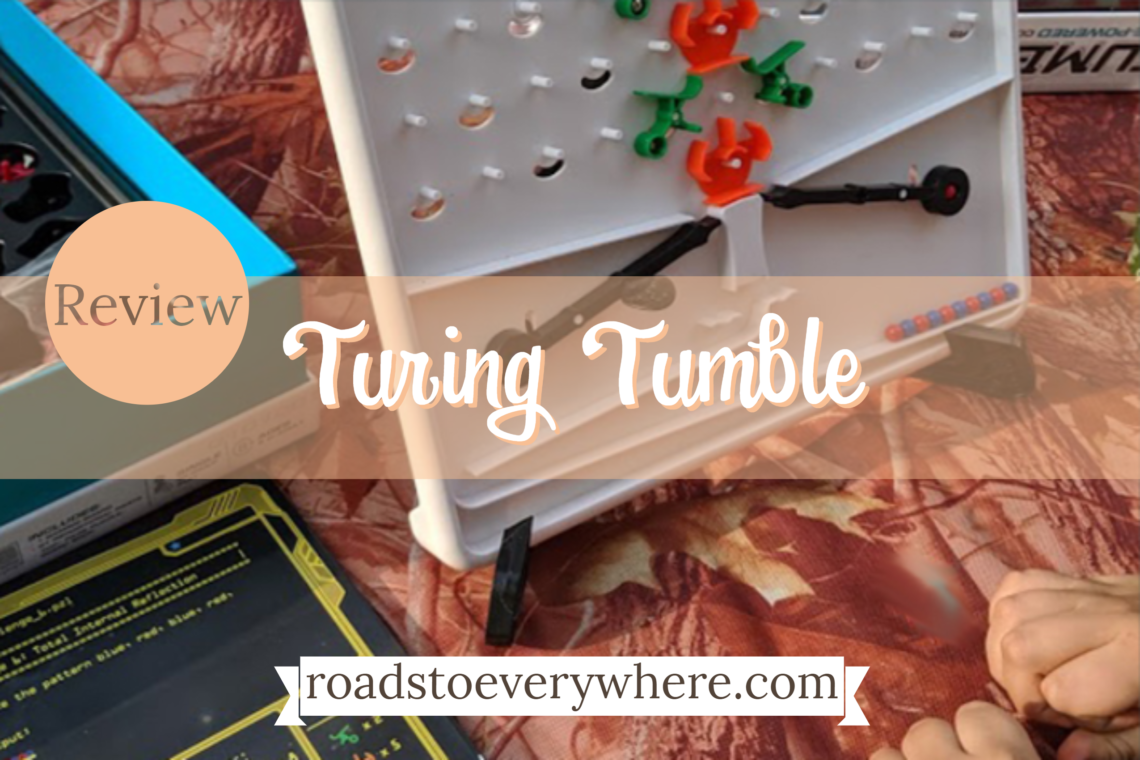 What in the world is a Turing Tumble? you might ask.

Turns out it’s a logic game named after Alan Turing. According to Wikipedia he is “widely considered to be the father of theoretical computer science and artificial intelligence.”

I had never heard of him. Had you?

But I like logic games, so I was happy to receive a copy from Timberdoodle in exchange for my honest review.

Turing Tumble arrived just in time for a camping trip with friends this summer, so I made sure to take it along.

I sat down with them for the first unboxing and assembly. We read through the first section of the included anime-style story/challenge book.

It’s a sci-fi story about a space engineer named Alia. She crashes into an uninhabited plant and encounters a mechanical computer which she has to figure out how to fix. That is where the challenges come in.

Each challenge page includes a set-up guide to show where to place certain starter pieces, along with the objective for that particular challenge. It also lists the available parts you have for completing the challenge.

The challenge then is to figure out where to place the other available pieces. You’ll start with blue marbles on one side at the top and red marbles on the other side.

If you have the switches set correctly the marbles will drop down in a certain order to end up at the bottom in the stated pattern, such as alternating blue/red/blue/red.

Rebecca and Drew enjoyed working together to solve the first few challenges. Independently, Drew found the puzzles just a little too challenging. He enjoyed flipping to the solutions pages and setting up the board to watch the balls come down as programmed.

On a later camping trip Rebecca got Turing Tumble out again and worked further into the book. She liked reading the story and then solving the puzzles as she went along. She hasn’t finished it yet but I’m sure she’ll get it out again soon.

Even with the book in hand I had a hard time understanding how a mechanical game like this compares to an electronic computer. While I love logic, math and engineering are not my strong suits.

I found the free Educator Guide download to be very helpful in explaining the concepts more in-depth. Also, the downloadable Practice Guide includes extra challenges that you can do between the ones in the included book for a more incremental approach. I suspect that would be helpful for younger students like Drew.

Here’s an overview video of Turing Tumble in action:

Turing Tumble is a single-player game (or for a couple of kids working together) recommended for ages 8 and up. Timberdoodle includes it in their 6th Grade Curriculum Kit.