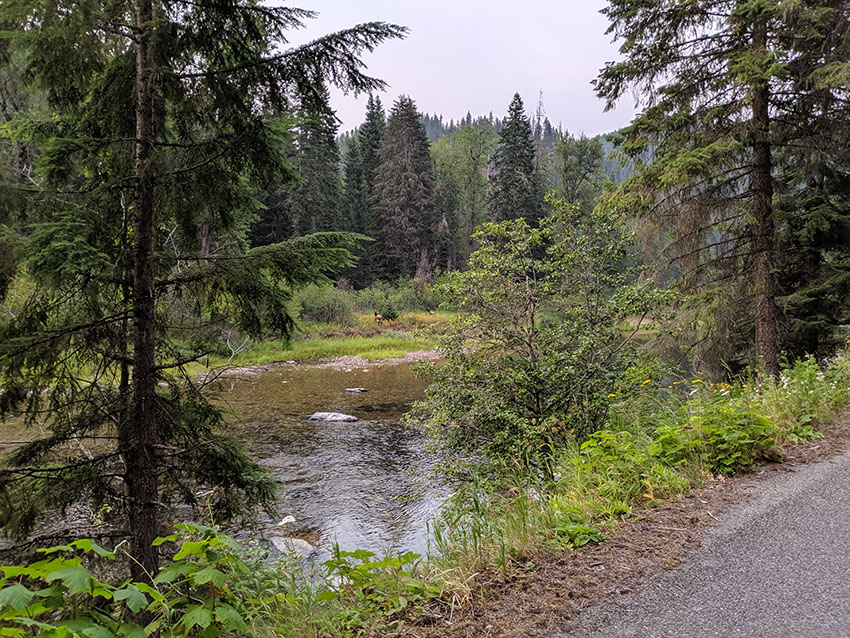 Continuing our #summer2019 adventures, we took a couple days off work the last week of July to go to a church camp in Tacoma, Washington. The weather was sunny and cool over there which was a welcome relief from the hot days we had been having at home.

The campground has a great view of Mt. Rainier on days when “the mountain is out” (meaning the weather is clear enough to see it). It’s hard to see in the picture because the snow on the mountain doesn’t contrast much with the sky.

The following Saturday was Lyle’s birthday. We celebrated by going out for breakfast to The Snake Pit, which claims to be Idaho’s oldest restaurant. It is way out in the boonies, up the north fork of the Coeur d’Alene River.

It has nothing whatsoever to do with snakes. Otherwise I wouldn’t have gone.

Each Thursday evening this month we’ve attended the North Idaho’s Got Talent competition put on by North Idaho Events at Silver Lake Mall. The print shop was a sponsor so we got to have a table… right in front of Claire’s!

The second weekend of August we went camping up the north fork of the Coeur d’Alene River (way on up past The Snake Pit) with friends from Montana.

There was a major wildfire in the area which accounts for the smoke in the air as we drove along the river.

We spotted about 4 elk as we drove to the campground on Friday evening. If you look close at the photo above you might be able to see them.

That Saturday we enjoyed one of our favorite hiking trails to two little tucked-away waterfalls, Fern Falls and Shadow Falls.

The following weekend we went camping again, this time to nearby Farragut State Park. Lyle’s brother’s family was planning to go with us but they had an emergency come up and couldn’t make it.

Then it was time for the Fair with another booth for ProPrint. I was the main “booth attendant” spending 56 hours there in 5 days.

Rebecca helped me 3 of the fair days. She especially enjoyed the “wild west” comedy show at Tumbleweed Crossing and the Kootenai County Sheriff’s K-9 demonstrations, attending each show multiple times.

This week we are playing catch-up and planning yet another camping trip for Labor Day weekend. It’s definitely been a jam-packed fun summer!