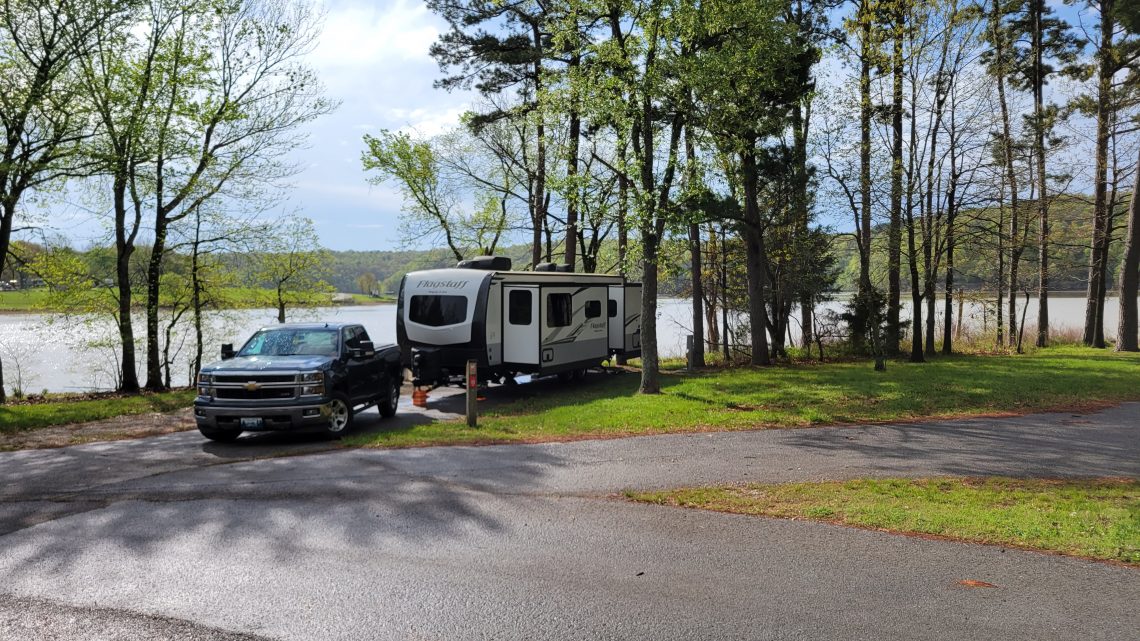 Last weekend we ventured out for our first camping trip of the year. We made reservations at Horseshoe Bend Campground on Beaver Lake outside of Rogers, Arkansas, a few weeks previous. We had hoped to get in some kayaking, but it turned out to be too windy that weekend. Still, it was a relaxing time.

In spite of the wind, the temperature was balmy and we enjoyed sunshine most of the weekend. Our campsite was right on the lake. It was a pleasant place to sit and read, visit, and listen to the birds and other wildlife.

We were entertained watching a family of geese as they meandered past several different times, fussing at their children. In geese families we weren’t sure if there was a difference in appearance between male and female so we looked it up. Nope, not much. We decided this probably was a mother and father with their babies, rather than a mother and an auntie. Then we learned that the male and female voices are different. According to the article we read, the male says, “Honk!” and the female says, “Hrink!” As we listened in on their conversation we were delighted to be able to tell the difference. Had you ever noticed that before?

After dark we watched the stars come out and listened to the frogs. We identified the distinctive croak of the bullfrog but there were other voices that sounded like goats. I was pretty sure they were also frogs. Another internet search told us that the Eastern Narrow-mouthed Toad (which is, indeed, actually a frog, not a toad) makes a bleating sound like a goat. Let me make sure I understand… it’s a frog, but named for a toad, that talks like a goat? Got it!

Sunrise over the lake was lovely, but it was still too windy to build a breakfast fire. We “cheated” and went into town for breakfast.

When we got back we went for a bike ride around the bend–not sure if it was the Horseshoe Bend, but it might have been. In any case, we thought it was neat to see our campsite from across the lake. (It’s the middle one in the picture.)

Later, Lyle did manage to rig up a windbreak, using a folding table, so he could build a fire to cook supper.

On our way home, we stopped for a short hike at a lovely city park on the outskirts of Rogers. I’m unsure if it can be called a hike since the trail was paved, but we walked for over a mile through the woods. The park also has unpaved trails, but it was too muddy to venture onto those. We talked about taking our bikes up there another time for more exploring.

It wasn’t the weekend we planned, but we had a good time and look forward to more adventures again soon.