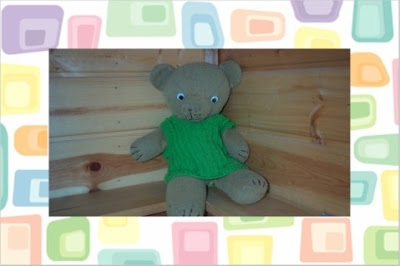 Lyle’s grandma made David for him. No one seems to remember exactly when, but by my best estimate, David’s gotta be pushing 40. And, somehow I suspect that makes him “vintage”. Hmm… Okay. We won’t go there.

Anyway, David’s original outfit was a pair of blue flannel pajamas in a little-boy print. The story goes that after Grandma left, Lyle realized that David didn’t have any clothes! So his mom made David some pajamas. David wore those pajamas for a decade or two, and was still wearing them when I made his acquaintance as a young bride. Then several years after we were married Lyle got a package from his mother for his birthday. It was this sporty green wool vest that she had knit just for David! I thought that was so cute. My mother-in-law has a great sense of humor!

So David traded in his pajamas for the vest… and now I’m wondering exactly where his pajamas got off to. I imagine they are mixed in with girls’ doll clothes somewhere in the depths of the garage. I’ll have to see if I can find them.